Both Sanjay Leela Bansal and Prasoon Josh are happy about Padmavat, and they hope this compromise is acceptable to Narendra Mod and Rahul Gandh.#Padmavati

— Ramesh Srivats (@rameshsrivats) December 30, 2017 The decision was taken after an examining committee meeting was held on Thursday in presence of CBFC chief Prasoon Joshi. The special panel consisted of Arvind Singh from Udaipur, Dr Chandramani Singh and professor K.K. Singh of Jaipur University. According to the CBFC, the film was approached with a “balanced view keeping in mind both the filmmakers and the society”. The board asked for several cuts, and a name change, before giving the film the certification for showing in theatres in India. According to some reports, 26 cuts were ordered.

Considering the complexities and concerns around the film, the requirement for a special panel was felt by CBFC “to add perspective to the final decision of the official committee,” the CBFC said. The final 3D application of the film was submitted to CBFC on Thursday (December 28). The certificate will be issued once the required modifications are carried out and final material submitted, the board said. “Padmavati”, which was earlier slated for release on December 1, got embroiled into controversies after the Karni Sena, an organisation of the Rajput community, urged a nationwide ban on the film claiming that it “distorts historical facts”. Members of the political organisation also physically assaulted Bhansali during the film’s shooting in Jaipur earlier this year. They even burnt the sets of the movie in outskirts of Mumbai. Later on, Bhansali appeared before a Parliamentary committee and maintained that the row over the yet-to-be released movie was just based on rumours, strongly rejecting charges that he had distorted “historical” facts about the possibly mythological Rajput queen, played by Deepika Padukone in the film. The row took an ugly turn when threats were issued against Bhansali and Deepika. “Padmavati” also features Ranveer Singh and Shahid Kapoor. (IANS) // ]]>

My heart goes out to all those affected by the Kamala Mills tragedy. Prayers and thoughts ?

— Ajay Devgn (@ajaydevgn) December 29, 2017 “Such incidents happen because of the corrupt BMC officials and other departments. They first allow illegal constructions and illegal cooking, after taking bribes. None of them fear the law because they know they will go scot-free. “Citizens of Mumbai have been fighting against illegal usage of gas cylinders on streets by illegal eateries, but have failed because the BMC officials are regularly paid. We then wait for human tragedies like these to happen and FIRs to be filed against the owners.

Saddened to read about the fire at Kamala mills and the loss of life. Condolences to all families affected. Safety regulations in our city have to be strengthened and adhered to.

“This is not the first time that such a human tragedy has occurred. We have lost so many innocent lives, but nothing has changed. It just boils down to becoming headlines for a few hours, till it happens again at another location,” Pandit wrote. He demanded that “all those BMC officers responsible for the illegalities in Kamla Mills compound are accountable for this tragedy and should be punished”. “There’s massive corruption, especially in the Fire Department of the BMC. NOCs and clearances are given by them to illegal restaurants, buildings which we know is not right. “Citizens who complain are not heard. They tire you by not acting against the complaints so that you stop complaining. A similar accident happened in Saki Naka recently. The city is on a volcano due to the apathy of the system,” he added and rued that “nobody responsible for the Kamla Mills fire will be punished… Inquiries will remain in files.” (IANS) // ]]> 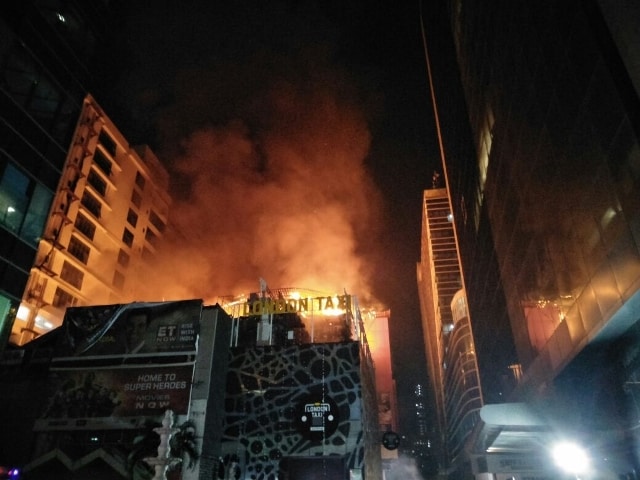 While the majority of the victims were reported to have died on the spot, the firemen were able to rescue 10 people safely. The injured have been admitted in the KEM Hospital, Bhatia Hospital, Airoli Burns Hospital, while two with minor injuries were taken to Sion Hospital, where they were treated and discharged. Autopsies of the victims have revealed that a majority of the casualties occurred due to asphyxiation more than the burns, said Avinash Supe, Dean, KEM Hospital.

I made several complaints regarding illegal structures in #KamalaMills' premises, but the BMC replied that there is nothing wrong here: Mangesh Kalaskar, Activist #Mumbai pic.twitter.com/npv20egqmN

The entire pub and the surrounding complex was full of patrons, including many women and tourists thronging the fashionable area to unwind. Mumbai Police have booked the owner of the pub for negligence, culpable homicide not amounting to murder. Initially the blaze was suspected to be triggered by an electric short-circuit. There are many major corporates, TV-radio-print media offices, more than three dozen high-end restaurants, pubs, etc, which also suffered damages in the blaze and their working was likely to be affected on Friday. The blaze comes as a huge setback to the government’s plans to make nightlife attractive by permitting all shops/malls to function round-the-clock, to generate more employment. (IANS) // ]]>