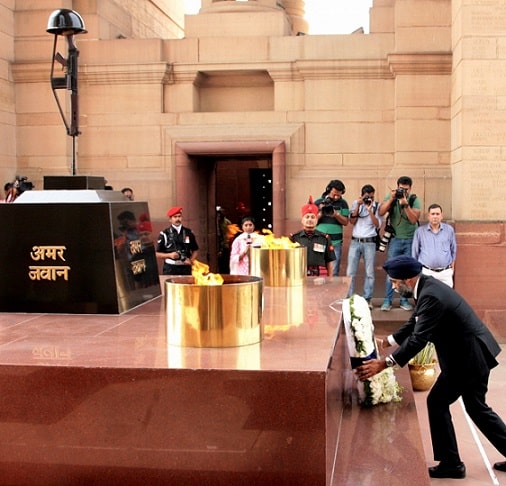 New Delhi: Canadian Minister of Innovation, Science and Economic Development Navdeep Bains calls on Union Minister for Finance and Corporate Affairs Arun Jaitley in New Delhi on Nov 8, 2016. (Photo: IANS/PIB) Captain Amarinder Singh may have been denied entry because the current group of Canadian Sikh MPs favoured AAP. The excuse used to stop Amarinder Singh was that he was going to hold political rallies in Canada to garner support for his forthcoming elections. It didn’t stop Canada letting its citizens go to Punjab to rally support for AAP. India  didn’t stop any AAP supporters from holding rallies in India! But it was WSO (World Sikh Organisation) that had put the spoke in at the time saying that Amarinder had given a clean chit to Tytler. Most of the Sikhs in Trudeau’s cabinet have deep roots in WSO, the World Sikh organisation. So did the WSO use its access to Canadian State power to deny Amarinder Singh entry! Is Canadian State policy on Sikhs being run by WSO by proxy? Has Canada taken a position on the 1984 massacres and outlawed anyone who refuses to believe that Tytler is guilty! If it has, it will be good and many Sikhs will welcome it. In which case Trudeau should officially declare this when in Punjab. Sikhs in Punjab will honour him. However if the current Canadian government was genuine about the Tytler issue, why has its Sikh Mps in the Canadian Government been silent if not complicit in the drawing of the black list of so called Khalistani Sikhs who have been campaigning for exposure of human rights violations by India and for justice in 1984 massacres, but are not banned in India! Both leading ministers personally know most of the individuals denied entry. Canada is the only country in the world with a black list of Sikhs and the only country with Sikhs holding levers of State power. There never was such a list before Sikhs got onto the top positions in Canada! The real reason may be that the people now black listed are also friends or associates of a very large number of Canadian Sikhs who are not sympathisers of the Sikhs in Trudeau’s Cabinet.  The Dashmesh Darbar in Surrey, Vancouver, which boasts of holding the largest Vaisakhi function in the world, refused to invite any of the Sikh members of Trudeau’s cabinet but were quite happy with non Sikh MPs attending their function. They and their friends in Toronto constitute a formidable opposition to the WSO backed Sikh politicians in Canada. Jagmeet Singh, head of the opposition party NDP, has the backing of the Sikh constituency opposed to the current crop of Sikh ministers. [caption id="attachment_24805" align="alignnone" width="806"]

Jagmee Singh head of NDP source https://www.flickr.com/photos/ontariofedlabour/38554421792[/caption] The Sikhs black listed in Canada do not actually constitute any security threat to India, the official reason used to black list them by Canadian immigration authorities. Surely India  would know who is a threat to it. The people on the list are seen as a potential political threat by a faction of Sikhs now in power in Canada. For once, whether he likes it or not, the Punjab CM may find himself on the same side as Europe based Khalistan supporters or ex supporters or human rights activists. He was most probably denied entry because the current group of Canadian Sikh MPs support AAP and may have wanted to influence the outcome in Punjab’s elections. This is disturbing if another country was trying to influence democratic outcome in an Indian election! If Amarinder Singh does meet Trudeau, he should ask him whether the Canadian PM and the Canadian system permits a group of politicians to abuse State power against members of their own community and exploit State power to influence election outcomes in other countries without stated Foreign Policy of the Government! Either way, Captain Amarinder Singh is right to refuse to meet the Sikh members of Trudeau government. If they are powerless to challenge their officials even when being Defence Minister  and Enterprise Minister, it is hardly worth wasting time with ministers who have no influence. If they are complicit in the decisions, then they lack integrity and their actions will shock the Sikh community.