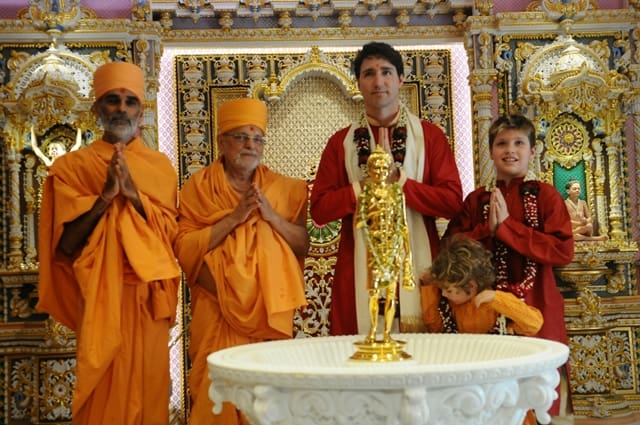 Look forward to meeting Canadian Prime Minister @JustinTrudeau in Amritsar on Wednesday. I’m hopeful that this meeting will help strengthen the close Indo-Canadian business ties as well as the deep-rooted people-to-people relations between our two countries.

— Capt.Amarinder Singh (@capt_amarinder) February 19, 2018 Trudeau is arriving in Amritsar on Wednesday and will offer prayers at the Golden Temple complex, where the holiest of Sikh shrines ‘Harmandir Sahib’ is located. The visit is of political and social significance in Canada as that country has a substantial Indian diaspora, majority of them being from Punjab. “Look forward to take Punjab’s close business as well as people-to-people relations with Canada to the next level, with a one-to-one meeting with visiting Canadian Prime Minister Justin Trudeau in Amritsar on Wednesday,” Amarinder Singh said. The Chief Minister, who has already issued instructions to the state administration to roll out the red carpet for the visiting dignitary’s visit, said on Monday that he looked forward to the meeting. “Look forward to meeting Canadian Prime Minister @JustinTrudeau in Amritsar on Wednesday. I’m hopeful that this meeting will help strengthen the close Indo-Canadian business ties as well as the deep-rooted people-to-people relations between our two countries,” he posted. There was uncertainty over Amarinder Singh’s meeting with Trudeau as the Punjab Chief Minister had last year courted controversy when he had refused to meet Canadian Defence Minister Harjit Singh Sajjan, the first Sikh Defence Minister of a western country, during a visit to Punjab in April last year. Amarinder Singh had gone public to label Sajjan and other ministers of Indian origin in the Trudeau government as “Khalistani sympathizers”. In a change of tone now, Amarinder Singh expressed the hope that his meeting with Trudeau would help strengthen the bilateral relations in context of the diaspora. While trade and business will be the key focus area of the meeting, the two leaders are also expected to discuss steps to intensify the close relations between the people of the two countries, according to a spokesperson of the Chief Minister’s Office (CMO). Punjab has deep roots with Canada, where a large Punjabi community is settled, and has always striven to strengthen the connect, Amarinder Singh said and expressed appreciation for Trudeau’s efforts in this direction. Citing Trudeau’s apology two years ago in the Canadian parliament for the 1914 Komagata Maru incident, in which hundreds of Sikh, Muslim and Hindu passengers in a ship were denied entry to Canada and forced to return to India, where they met a violent fate, he said it was a gesture that underlined the depth of the relations between the two countries, which Wednesday’s meeting would help in consolidating further. (IANS)
MORE LM NEWS 24