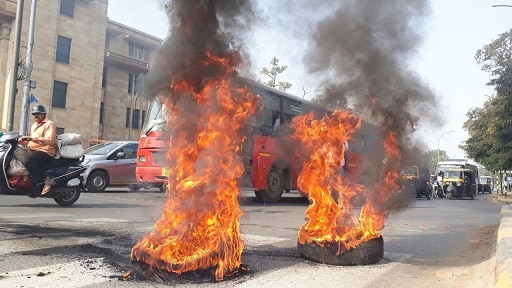 CHALLENGES BEFORE MODI IN RUN UPTO 2019

The much-sought and aggressively fought Gujarat polls have sent out conflicting signals for Prime Minister Narendra Modi. Victory it certainly is,  but it may prove pyrrhic if he fails to surmount a combination of caste, religious, organizational and individual obstacles in the run-up to the Lok Sabha polls, barely 15 months away.   The new year has begun with two significant developments. The government could not push through the legislation to ban and criminalize Talaq-e-Bidat, popularly called triple talaq, a practice that places Muslim women to great disadvantage when divorced. Passed through the Lok Sabha, it was stalled in the upper house. The Opposition wanted changes to remove some serious lacunae and be referred to parliamentary for deeper discussion and wider consultations,   Naive though this suggestion may appear, could the government not have accepted the changes? Despite frequent incidents of violence against Muslims and campaigns like “ghar wapasi” and “love jihad” by Hindu rightwing vigilantes, the liberal classes, and by government’s own assessment, a bulk of the Muslim women, want this to become law. Here is a case of a good move at gender justice gone awry.   In the second development, age-old fault-lines surfaced in Maharashtra. Dalits, the lowest of the low castes, part of a British force, celebrating the bicentenary of their victory against the Peshwa at Bhima Koregaon, were attacked by upper caste groups.   Modern-day celebration of a British victory against an Indian ruler is certainly a rarity, going by the history of colonial India. But neither the celebrations, an annual affair for long, were new, nor is the caste friction that they represent. But violence, that quickly spread to other parts of Maharashtra and spilled over to neighbouring Gujarat and Madhya Pradesh, was a new development.    [caption id="attachment_24114" align="aligncenter" width="450"]

Pune: Protesters stage a demonstration during a Maharashtra shutdown called by various Dalit parties against Koregaon-Bhima (Maharashtra) violence, in Pimpri of Pune on Jan 3, 2018. large (Photo IANS)[/caption] Seen politically, it has eroded the support among the Dalits that the ruling Bharatiya Janata Party (BJP) has nurtured through long years of effort, living down its image of an upper caste party.   Viewing this through the BJP prism, again, is incidental since it is power. India as a whole and Indians have a long, unenviable record of undermining their own social ethos for narrow and short-term political gains. This is the reason why it got colonized in the first place.      Modi’s silence on these and other sensitive issues is deafening. It adds grist to the mill of his friends and foes. The end-2017 saw Modi’s friend-turned-inveterate foe Pravin Togadia being elected President of the Vishwa Hindu Parishad (VHP), a key arm of the Sangh conglomerate that works under the Rashtriya Swayamsewak Sangh (RSS) umbrella.  The two have been at logger-heads for five years and Modi, on becoming PM, had all but sidelined him. A medico turned Hindutva hardliner, Togadia won against retired judge VS Kogaje and Jagannath Shahi who were reportedly proposed by Modi’s camp.  Significantly, Gujarat is the political backyard of all three – Modi, BJP chief Amit shah and Togadia — and could become a key battleground, yet again, as the elections approach.  Inexplicably, neither the pro-government sections of the mainstream media, nor the critics, took serious enough note of this development that, given the way the Sangh Parivar works, could not have occurred without a tacit nod from the RSS.  Does that indicate RSS’ declining confidence in Modi and impatience when it has made no secret of its desire to push its Hindutva agenda before the parliamentary polls?         It needs recalling that RSS chief Mohan Bhagwat had in January 2015 suggested that construction of the Ram temple in Ayodhya ought to be initiated. Its Pratinidhi Sabha had adopted a resolution to that effect. However, Modi has been silent on this for two years now. Nor has he changed his development agenda that places building toilets over the temple.  If the temple is to be built on the disputed site, it remains mired in litigation the course of which the Modi Government has been unable to alter. There is speculation that the government may promulgate an ordinance, but such a course is fraught with serious political risks.  Modi cannot take the RSS’ unquestioned endorsement of his leadership for granted. Continuance till after the 2019 Lok Sabha polls of Shah, Modi’s principal political ally, as the BJP chief, remains uncertain. Shah’s term ends in August. His getting a third term is against the party’s norms. Will they be tweaked?  Undoubtedly, Modi is unbeatable as of now and there seems no alternative to him to head the next government. But the Sangh that, in the first place anointed him in 2013, may take a different view. Political logic states that the temple and other agenda of the Sangh could become the litmus test for Modi’s continuance.  The Gujarat outcome has shown that the BJP is weak in rural areas. The urban infrastructure has not percolated to the countryside. Principal rival Congress upturned BJP calculation by bagging 70 of 123 rural seats. The BJP could reach its lowest tally in over two decades of 99 only because it could bag 46 of 59 urban seats.   Now, with Karnataka being an exception, all other states going to the polls this year – Rajasthan, Madhya Pradesh and Chhattisgarh – are hugely rural. They suffer from rural indebtedness and poor infrastructure, besides deep caste and sectarian cleavages. Both Modi, the principal polls campaigner, and the BJP, will have to learn lessons from Gujarat while strategizing for these states.  The issues even for the rural areas in these states are different. Gujarat, along the sea coast, is relatively advanced and prosperous when compared to the land-locked Rajasthan, Madhya Pradesh and Chhattisgarh. The BJP has been in power there for long, attracting the incumbency factor.  Impoverished tribals dominate Chhattisgarh. Tribal population in Rajasthan’s southern parts is not happy that the Vasundhara Raje Government attempted to win over the agitating Gujjar community. Land owning and relatively prosperous, the community has a record of oppressing the tribals and dalits. Unwilling to suffer incumbency, Rajasthan voters have been alternately changing the ruling party.  Lastly, the economic factor. BJP circles cite last year’s unprecedented victory in Uttar Pradesh as political validation of the twin measures —  demonetization and the GST. But an impoverished UP stands in contrast to Karnataka or to Gujarat where  the urban voter bowed to Modi’s appeal for “Gujarati pride”. The “our man is in Delhi” factor worked.  In a diverse India, beyond a point, people in Gujarat do not get carried away by emotional appeal and people of Uttar Pradesh cannot be carried away with material and practical issues. Modi had promised rapid economic development in the 2014 Lok Sabha polls. That had helped him to sweep all four states that will go to the polls this year. Large parts of the country voted him to office.  The initial 18 months of his tenure saw his efforts to deliver on his electoral promises. Statistics, and the way the critics view them notwithstanding, the political perception is that the ‘toilet’ agenda has taken numerous hits from ‘temple’ and its aggressive proponents.  How will Modi tackle them? What will he promise to the people in  the summer of 2019? //