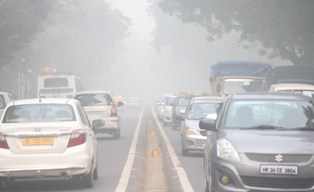 Delhi air 'very poor' but diesel trucks are back

— United Nations India (@UNinIndia) November 15, 2017 The major pollutant PM2.5 or particles with diameter less than 2.5 micrometres, recorded 362 units putting it in “very poor” category while PM10 concentration was found at 281 units – considered “poor”. The Supreme Court-monitored Environment Pollution Control Authority (EPCA) ban on entry of trucks and on construction activities in Delhi was imposed on November 7 as mandated by the Graded Response Action Plan (GRAP) when air quality falls to “severe-plus” or “emergency” standards. Under the “severe-plus” category, according to rules, truck movement in Delhi was stopped, construction work was banned, odd-even scheme for vehicles was imposed and schools were shut. The very-poor GRAP comes in force when PM2.5 levels are between 121-250 units or PM10 levels are between 351-430 units. Under “very poor”, diesel generator sets are also banned and the car parking fee is enhanced by three-four times to discourage private cars on roads.

The smog isn’t going away, not till surface winds strengthen and it rains. System of Air Quality and Weather Forecasting And Research (SAFAR), a weather forecasting body under the Ministry of Earth Sciences, has predicted levels of PM2.5 and PM10 in Delhi to remain in “very poor” and “poor” categories, respectively, on Friday. It may already be getting worse after the pitiful respite of the last two days. EPCA member and Centre for Science and Environment (CSE) researcher Usman Nasim said pollution levels in the region may go up in coming days due to climatic conditions. “Pollution may increase in next few days due to withdrawal of north-west winds. As wind speed goes down, pollution levels to go up. As per SAFAR, AQI will remain in very poor quality,” Nasim said. He said the major contributing factor would be local vehicular emissions now and increase in moisture would aggravate it. He said stubble burning in states of Punjab, Haryana had almost came to an end. Nasim warned that certain actions from EPCA may come again, in case AQI enters the severe category. “As far as construction is concerned, it will not be allowed since the NGT ban is there,” Nasim said. Mahesh Palwat, Director of Skymet, a private weather forecast agency, said air quality may show little improvement in the afternoon but it will remain in very poor category, mostly during morning and night hours. “At present, it is snowing in Himachal Pradesh and Jammu & Kashmir. As its effect, winds from north-west and north will start and air pollution will decrease in Delhi from November 20,” Palawat said.


New Delhi’s pollution problem is so bad that some diplomats are packing their bags https://t.co/z6mtV5E3zI

Pick up the road dust with vacuum tech and blow it in the air. Sorry Dwarka, we are letting you down. How idiotic can one be ?? pic.twitter.com/AcBaGeiEcD — Arvind Jha (@jalajboy) November 16, 2017

During Shiela Govt, Delhi Govt. had enough parking for 8000 Buses

The #media in #India seems inclined to speak up on #AirPollution only when the smog shrouds our cities in winters. As soon as the smog lifts the media’s attention drifts. #MyRightToBreathe #AirPocolypse #Right2Breathe #BeatPollution