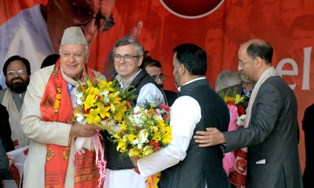 Autonomy for Kashmir: Who stands where?

The autonomy issue and who stands where Kashmir’s accession to India was predicated on it getting a special status in the Indian Union, that the Centre would only be responsible for defence, communications and foreign affairs. This was done by means of Article 370, supposed to be a temporary provision in the Constitution but one that became de facto permament because the Constituent Assembly of Jammu and Kashmir dissolved itself in January 1957 without abrogating or changing it. Later rulings of the Supreme Court, and one as recently as 2015 by the Jammu and Kashmir High Court, have made the article permanent. Article 35A, inserted into the Constitution by a presidential order in 1954, seeks to preserve the demographic status of Jammu and Kashmir by defining permanent residents of the state for the purposes of buying immovable property, getting a state government job, admission to a professional college, scholarship or aid. The validity and expanse of this article is being considered by the Supreme Court now. BJP: The abrogation of Article 370 and 35A is one of the pillars of the right wing’s view of the state and its further incorporation with India. The BJP campaigned aggressively for this aggressively in the Lok Sabha polls of 2014 and the Jammu and Kashmir elections of the same year. A status quo prevailed in the Agenda of Alliance that the party came up with when it partnered the Peoples Democratic Party to form a coalition government in the state. That hasn’t kept them from talking about it though. “The prevailing situation in the Valley shows that Article 370 has created a separatist psyche and acts as a breeding ground for separatist emotion.” BJP spokesperson Vijender Gupta in August 2017

The Vajpayee doctrine on Kashmir called for peace, progress and prosperity in the Valley by imbibing the spirit of Insaniyat (Humanity) , Jamhuriyat (Democracy) and Kashmiriyat (Identity of the people of Kashmir). The doctrine was hailed across Jammu and Kashmir, including by extremists. Vajpayee’s mantra included resolving all outstanding issues with Pakistan, including Jammu and Kashmir, peacefully through bilateral dialogue without any third party intervention. He carried his message of peace to Pakistan during a bus journey to Lahore on February 19, 1999. Congress: It stands for the much-denuded Article, but takes a fine line on not pushing a strong line on autonomy. “Article 370 (3) read with Art 370 (2) clarifies 370 cannot be repealed without the consent of the Constituent Assembly which does not exist. No brainer.” Congress spokesperson Manish Tewari in May 2014 National Conference: All for it. Seeks the pristine autonomy of the pre-1953 era. In June 2000, the state Assembly passed a resolution seeking greater autonomy for the state. Farooq Abdullah was chief minister at the time. The resolution was roundly rejcted by the Atal Bihari Vajpayee government of the time, the Union Cabinet saying “it would set the clock back and reverse the natural process of harmonising the aspirations of the people of Jammu and Kashmir with the integrity of the nation.” Peoples Democratic Party: Is for its own dressed-up version of autonomy that it calls self-rule. In partnerig with the BJP, the Mehbooba Mufti-led party is in a distinctly uncomfortable place on this issue. Separatists: By definition, self-determination or independence is their goal. They do not see autonomy as a goal, much less a desirable interregnum. Most of the current lot in the splintered Hurriyat were part of the Muslim United Front that contested the Jammu and Kashmir Assembly elections of 1987, their poll manifesto invoking the Shimla pact, Islamic unity and real autonomy. The MUF got almost a third of the popular vote but only four seats in elections that were widely believed to be rigged. The Farooq Abdullah-led National Conference in partnership with the Congress came to power, and the last chance to bring back disaffected elements of the population had been lost, some now say forever.

Bollywood star of yesteryears Rishi Kapoor took to Twitter to back Farooq Abdullah. Here’s what happened then:

Farooq Abdhulla ji, Salaam! Totally agree with you,sir. J&K is ours, and PoK is theirs. This is the only way we can solve our problem. Accept it, I am 65 years old and I want to see Pakistan before I die. I want my children to see their roots. Bas karva Dijiye. Jai Mata Di !

And the bashing started:

#RishiKapoor wants to visit Pakistan before he dies. So in D-Day climax, his death was fake

Here’s an immediate solution to your problem, @chintskap:

Emigrate to Pakistan: You, your children, the whole lot. Return to your “roots” and stay there. We’ll catch up with you when Pakistan disintegrates: another 10-15 years at most. You’ll still be alive then, we hope. https://t.co/FmvJ3BJgrv — The Indian Interest (@IndianInterest) November 12, 2017

If the @chintskap types are so much in love with Pakistan, Why did his Parents Migrate ??? They can correct the mistakes & Go back to their roots , Who is Stopping???

Is there any accession or referendum gifting POK to your home land Pakistan? Do tell. We won’t surrender our land because @chintskap wants a visa. Why not act in Pak films instead?Just like hordes of wannabes descend on us from there.