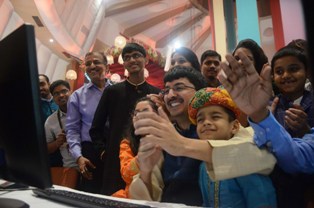 Economy is in so much danger that Sensex breaches 33,000-mark for the first time and Nifty hits all-time high of 10,340..

The Congress on Wednesday hit out at Union Finance Minister Arun Jaitley for giving a “factually wrong picture” of India’s economy and said the Modi government has put the “economy in ICU”. “Whatever the Finance Minister said about the economy is not true. It is wrong to say that the country’s economic fundamentals are strong. Jaitley’s claim that India’s economy is the world’s fastest growing is incorrect and factually wrong,” said Congress spokesperson Anand Sharma while briefing mediapersons. The Congress alleged that 33 per cent jobs have been lost in the Micro, Small and Medium Enterprises (MSME) sector, which is 3.7 crore jobs, after last year’s demonetisation. The party also hit out at the government for hasty implementation of GST and causing hardships for the farmers, businessmen, labourers, youth and others. The government has no plan to put the economy back on track, he added. Sharma asked: “Who is responsible for contraction of GDP from 9.2% to 5.7% resulting in a loss of over Rs three lakh crore? Actually the GDP had fallen to 3.7 and 4.1 per cent. “China is growing at 6.9 per cent. The Finance Minister should have used the words before understanding it,” he added.   “Markets zoomed higher on Wednesday to close at new life highs. The index had opened on a strong note in the morning session on the back of positive sentiments due to various measures taken by the government to spur economy including capitalisation of public sector banks and a massive road building programme,” Deepak Jasani, Head – Retail Research, HDFC Securities, told IANS. “It corrected a bit early in the morning but later resumed the uptrend closing near the intra day highs. The Sensex settled above the psychologically important 33,000 level for the first time in history.”