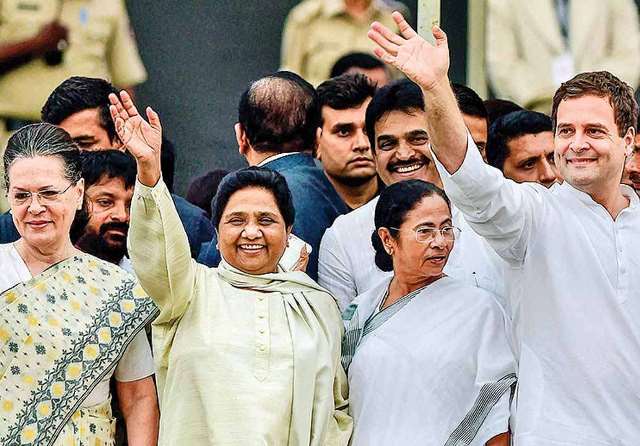 While the Bharatiya Janata Party has managed to placate its sulking partners and finalized alliances with them well ahead of the upcoming seven-phase Lok Sabha polls, the dates for which were announced on March 10, opposition parties are still struggling to sink their differences and build a strong coalition to take on a resurgent BJP.

This is despite the fact that there is a sense of urgency in the opposition camp about the need to put their house in order as the BJP has a distinct political advantage over it after the Pulwama attack and the subsequent air strikes launched by India on terror camps in Pakistan.

As the biggest component of the opposition bloc, having a pan-India presence, the Congress is under pressure to demonstrate greater flexibility in forging alliances with regional parties, especially in view of the changed political scenario. Both Nationalist Congress Party chief Sharad Pawar and Andhra Pradesh chief minister N.Chandrababu Naidu had recently urged Congress president Rahul Gandhi to sort out outstanding issues with the Mamata Banerjee-led Trinamool Congress in West Bengal and the Aam Admi Party in Delhi. Besides these two states, the other trouble spot for the Congress is the politically-crucial state of Uttar Pradesh which sends 80 MPs to the Lok Sabha.

Though the Pulwama attack has led to a rethink among the opposition leaders about alliances, they are still reluctant to cede space to each other as they see this as an opportunity to drive the best possible bargain in seat-sharing negotiations. In some cases, disputes between parties have come in the way of sealing a partnership and in other instances, resistance from within the ranks has stalled the formation of an opposition alliance.

Well aware that the pressure is on the Congress to accommodate its smaller partners, regional parties are playing hardball. Even parties like the Janata Dal (S) in Karnataka and the Rashtriya Janata Dal in Bihar have negotiated hard to get the maximum number of seats from the Congress.

While the Congress has sealed an electoral pact in Karnataka, the party backed off from an alliance with Arvind Kejriwal’s Aam Admi Party in Delhi. The AAP leadership was keen on a partnership but the Congress party’s local unit did not favour an alliance with Kejriwal as it has not forgiven him for leading a campaign against the United Progressive Alliance government which eventually led to its humiliating defeat in the 2014 Lok Sabha elections.

Besides this trust deficit, the two parties were unable to arrive at a satisfactory seat-sharing formula. The AAP was not willing to give more than two of the seven Delhi Lok Sabha seats to the Congress but the grand old party wanted three which was not agreeable to Kejriwal. As a quid pro quo, the AAP wanted the Congress to accommodate it in Punjab and Haryana. This was not acceptable to the Congress which believes it can ill-afford to part with seats in these two states where it can do well on its own.

Uttar Pradesh and West Bengal are the two big challenges before the Congress. Bahujan Samaj Party chief Mayawati and Samajwadi Party president Akhilesh Yadav have set aside their old rivalry and forged an alliance for the Lok Sabha election in Uttar Pradesh. It has set aside three seats for the Ajit Singh-led Rashtriya Lok Dal and two for the Congress. Angry over this unilateral announcement, the Congress declared that it would contest all the 80 seats in the state and then followed it up by roping in Priyanka Gandhi to manage party affairs in Eastern Uttar Pradesh.

Post-Pulwama, Akhilesh Yadav is said to have realized that a split in the anti-BJP votes would end up helping the saffron party and has been in touch with Congress leaders about a possible understanding. However, Mayawati is adamant about not doing any business with the Congress. The BSP chief fears that the Congress can disturb her Dalit support base and she does not want to provide an opportunity to the Congress to revive itself in a state where it has been reduced to a bit player.

Moreover, Mayawati nurses Prime Ministerial ambitions. Unlike other regional players like Mamata Banerjee, Mayawati’s support base is not confined to one state as she believes she has the potential to tap into the Dalit sentiment across the country. Mayawati may be over-estimating her strength, given that her vote share has been on a decline over the years, but this has not stopped her from making a pitch for the top slot. In any case, she would not like to facilitate Rahul Gandhi’s ascent to power.

If Mayawati is proving to be a tough customer, it is not any easier to do business with the feisty Trinamool Congress chief  Mamata Banerjee. Like Mayawati, the West Bengal chief minister also has national ambitions. But unlike the BSP supremo, the Trinamool Congress chief has acknowledged that all opposition parties need to put up a united fight to battle the BJP. However, there is no clarity about how she plans to move ahead in that direction.

A little over a month ago, Mamata Banerjee declared that she was willing to align with the Congress and the Left parties at the national level to defeat the BJP. But at the same time, she said they would also compete against each other in the state. The Trinamool chief has suggested that the combined opposition field one candidate on each seat from a party which is best placed to defeat the BJP. However, others are not taken up with this idea. The West Bengal unit of the Congress has vehemently opposed an understanding with the Trinamool Congress as the two parties are locked in a bitter battle in the state.

At the same time, the Communist Party of India (Marxist) has offered a seat-sharing formula to the Congress in West Bengal. It has proposed that the two parties mutually agree not to fight each other in the six Lok Sabha seats currently held by the Congress and the Left party. However, the Congress is quibbling over the Raiganj constituency which was won by the CPM last time. Clearly, the opposition parties have a long distance to cover before they can iron out these glitches and be seen as a serious challenger to the BJP-led alliance. But with the general election round the corner, they do not have the luxury of time to sort out their differences. The disarray in the opposition camp stands out as a sharp contrast to the BJP which is far more organized and battle-ready for the upcoming all-important election.