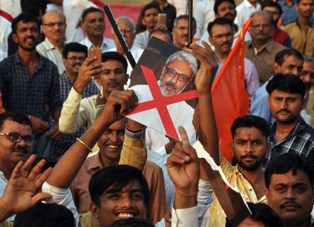 Padmavati protest may go global soon with Rajput Karni Sena president Sukhdev Singh Gogamedi declaring their fight to ban the film will continue in Britain. Speaking to Republic TV, Gogamedi said,”Our Rajput brothers, our Hindu brothers in England (sic) will be asked to continue the protest there.” Gogamedi told the TV channel that his passport stands impounded because of his role in civil unrest related to a reservation protest led by the Sena or he would have gone himself. Saying the Sena would approach the World Court as well the authorities in Britain, he repeated the Sena’s earlier threat: “Any theatre that screens the film will be burnt down.”

Earlier on Thursday, as the British censors cleared the controversial film Padmavati for release on December 1, and India’s apex court said it will hear on November 28 a fresh plea seeking to block the release of the Sanjay Leela Bhansali movie outside India.

A source close to the film’s makers said Padmavati won’t release anywhere on December 1 — its original release date which was deferred after the Indian censor board returned their application on grounds that it was incomplete. “We are not releasing the film anywhere on December 1,” the source told IANS. A petitioner told the Supreme Court in New Delhi that “grave damage would be done to social harmony if the movie was allowed to be released abroad”. According to the official website of the British Board Of Film Classification (BBFC), Padmavati will be released “uncut” in the UK. But its release will now have to wait. The makers are yet to secure a censor certificate in India, where Chief Ministers of at least four states have taken a stand against the release of the historical drama. Starring Deepika Padukone with Ranveer Singh and Shahid Kapoor in key roles, the magnum opus tells the tale of Rani Padmavati, the legendary Mewar queen known for her beauty and intelligence as well as courage, her husband Maharawal Ratan Singh, a Rajput warrior king who fought to defend his kingdom and wife’s honour, and Sultan Alauddin Khilji. The movie, Bhansali says, is a tribute to the valour of legendary queen Padmavati. It is mired in controversy in India as Hindu groups backed by the BJP are up in arms against alleged “distortion of historical facts”. Bhansali has repeatedly rebuffed the charges but has been receiving brickbats. A Haryana BJP leader had even offered a reward of Rs 10 crore to anyone who would “behead” Bhansali and the film’s lead actress. Such reactions have disturbed members of the film fraternity. Masaan director Neeraj Ghaywan” and Pihu helmer Vinod Kapri expressed concern, while veteran actor-politician Shatrughan Sinha questioned Prime Minister Narendra Modi’s silence on the controversy. Shatrughan Sinha, a BJP MP, said: “I’d like to say it’s too late for our dynamic Prime Minister and the other high command to stay silent. Padmavati is a raging issue. And the fringe elements are openly issuing threats. How can the high command keep quiet when goons are threatening to behead Bhansali and Deepika Padukone? “It’s time for our honourable Prime Minister to say ‘enough is enough’. If you give the goons a free reign, they will continue to cross limits in ways we wouldn’t be able to control,” he said.


Incidentally, Padmavati is produced by Viacom 18 Motion Pictures and Bhansali Productions. The Chairman of Viacom 18 is Mukesh Ambani. Will the ‘brave’ thugs of Karni Sena and the BJP offer a 10 crore reward for Ambani’s testicles on a platter? Just wondering. . . ?

How the karni sena shows their respect to a woman : 1) Call other woman names 2) Threaten to chop off her nose and behead her Wow! Great sense of respect ?? pic.twitter.com/advwhOqlGk

Ok Karni Sena. You burn down even one theatre in UK and we will pay your return airfare. If not, you stop behaving like the thekedaars of Rajput pride. Bolo? pic.twitter.com/Crd7jaYT13

People have right to express their disagreement and insecurity,but its not the right way to do so by saying “sir katwa denge” and naak katwa denge”,stop this !! I am a Rajput and i am ashamed by how my community is expressing itself #KarniSena #Padmavati