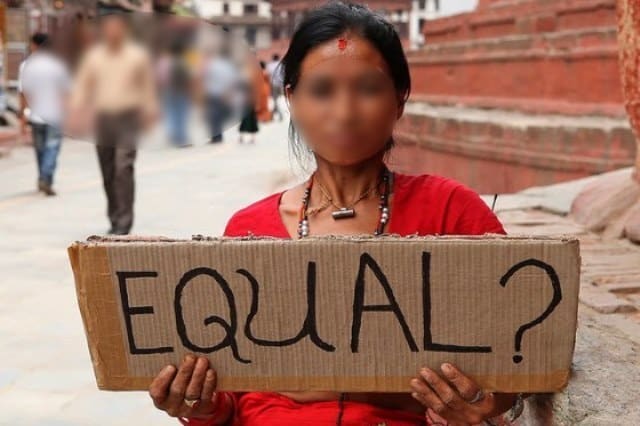 She herself was accosted by a widowed employer who offered money for her ‘cooperation’. She was repulsed, yet could never gather courage to leave the city. Benu opens up:   Life of a housemaid holds valuable lessons in survival. You know there are men, there are ‘friendly’ men and there are beasts posing as men. I once cooked for an elderly couple in a gated community in Mayur Vihar (East Delhi) when the lady of the house succumbed to Cancer.

Within two months of her death, I saw a changed man in the ‘Uncle’ (that’s what I called him). He would chat me up, open the door but will not leave the passage, used the water-dispenser when I was washing dishes and nudged me at every pretence … the signs were perceptible. I gave him the benefit of the doubt till one day he simply blocked my way and forcibly held my hand. “I need someone to take care of me,” he began. “I will pay money. If I find you good, I can even marry you.” I felt repulsed by this slobbering old dog. But let me start from my arrival in Delhi the megacity.

I belong to (North) 24 Pargana zilla in (West) Bengal and came to Delhi in search for money after my husband, a farm labourer, died of TB in 2009. A Christian group had helped some of the village women in training as housemaids and finding work for them. These women sent good money home and I was also tempted when one of them wanted a long leave and asked me to replace him for a month.

‘My Employer Spiked My Drink And Raped Me’

Delhi is a cham-chamata shahar (glittering mega city) where even nights are illuminated. I was awestruck. I used to take part in community ceremony for food preparation in my village and was considered a good cook. This was the reason my co-villager offered me the temporary job. Before handing me over the charge, she gave me a sagely advice, “Now that you are here, Benu, you will never be able to leave this city.

But remember: avoid two types of men when you seek work – single men and old men.” How prophetic she turned out to be years later, I wonder! After the first month of work as a substitute, I was able to save Rs500 and send back home to my son (20), who did odd jobs in and around the village. I wanted him to fix our roof with the money, but lured by the earnings, he used the money to reach me here, saying that he too wanted to work in Delhi.

Such was the lure of Rs 500 back in our village. I rented a room in Chilla village of east Delhi. This rural-urban settlement supplies housemaids and cheap labour to rich (actually, a middle-class) housing colonies nearby. Two households hired me for cooking and dish-washing. The first family belonged to a working young couple, who were always in rush while the other was a retired couple whose children had settled abroad.

It all looked good till I found the dark underbelly of city life. The idle sons of Gujjar landlords at Chilla village targeted good-looking (read fair-complexioned) women in the tenant community. They would often get the man of the house drunk and then had their way. It was common knowledge that if these lads set eyes on a woman, it would be impossible to live in the vicinity and stay unharmed.

The sexual exploitation did not end there. All maids are bound to make an identity card, duly signed by local police, to be submitted to the gated community they work for. This meant lewd looks and remarks while applying for the ‘card’ which often turned into brutal physical violations, first from the police and later routinely from the society guards. Then there were other male employees in the society up for grabs.

One of my friends, a new recruit who did not know how to operate a lift, was accosted and molested by the society gardener in the lift, leaving her shocked and teary-eyed. I was thankful to be a woman of short height and dark complexion. But the contentment was short-lived. The woman in the retired household was diagnosed with cancer and hospitalised. I was 40 when I lost my husband, so I could empathise with the old man who would soon be widowed.

Cancer ‘matlab maut’ (means death), and it happened. I pitied the lonely life of Uncle. However, in less than two months, as visitors inflow died, I saw a changed man in the ‘Uncle’. He would chat me up, open the door but will not leave the passage, used the water-dispenser when I was washing dishes and nudged me at every pretence … the signs were perceptible.

Then, one day he simply blocked my way and forcibly held my hand. “I need someone to take care of me,” he began. “I will pay money. If I find you good, I can even marry you.” I wanted to run. Then, I thought the money I would lose if I quit. The dilemma ended as the old man moved another step. On an impulse, I just shook his hand and ran away.

That night in bed at home, a rainbow of thought did not let me sleep. Could this happen to a woman in her late forties? What if I return to work? Was he serious when he offered to marry a woman 20 years younger? And then I remembered the advice of my old friend. Trust not a single man and an old man. This man was both. I approached that friend again. She had the remedy. “Go to Nancy didi,” she told me and I did. Nancy didi, a young widower living in the same housing society, heard me out and gave me several options: take him to police or report the matter to society office, with her backing.

I am illiterate but having lived in Delhi for nearly a decade I know that these actions will force me out of livelihood. I was worried what will I tell my son about it. I asked Didi to merely safeguard me from that lecher in future, as I would come to work there every day. Didi took my phone and said she had put her number on speed dial, whatever that meant, and asked me ring her if the old man ever stalked me again.

“Or just rush to my house,” she said. Thankfully, I never required to do either in the last two years but I am thankful to Nancy Didi for instilling this confidence in me. But I often think if a 65-year old can give me such sleepless nights, think of the trauma that goes into the mind of housewives raped routinely by randy boys in our colony or women troubled daily by society employees and lustful house owners. (The identity of certain persons and locations were changed on request. The original conversation in Hindi was transcribed by LokMarg desk)