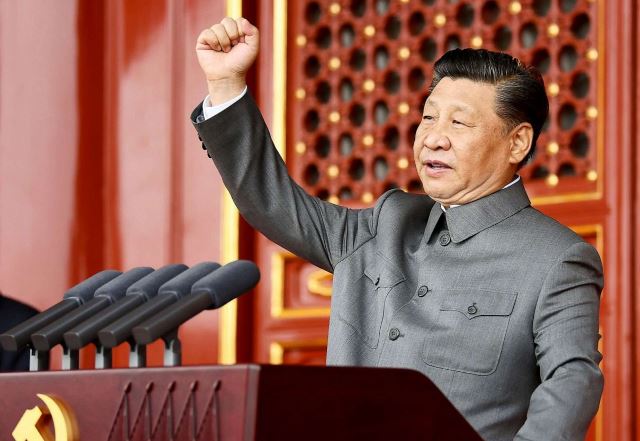 The Big Daddy In China

Something peculiar and unprecedented is happening in perhaps one of the most advanced capitalist countries of the world – the People’s Republic of China, run by a totalitarian, one-dimensional and powerful regime led by the Communist Party of China. And it is certainly not a ‘Second Cultural Revolution’ which degraded and ravaged the lives of millions, including the educated youth, intellectuals, communists, literary figures, writers, musicians and artists, and veteran party leaders, among others. Besides, anything remotely western, including western classical music or literature, was abhorred and condemned.

The cultural revolution was implemented in the cities, towns and vast rural countryside of China, between 1966 and 1977, with Mao Tse Tung at the helm, and unleashed by the notorious ‘Gang of Four’. The gang was led by Mao’s fourth wife, Jiang Qing, also a former actress.

The ten-year project was enacted by the party cadres with devastating consequences, ostensibly to clean the party and society of ‘reactionary and bourgeois elements’, to resurrect the ‘original principles’ of Mao Tse Tung Thought, and to re-educate the educated youth and intelligentsia in urban areas and compel them to go and work for extremely long spells in rural countryside. All those deviating from the stated goals would be severely punished. President Xi Jinping was a student then; it is reported that his father, a committed party official holding important positions, too, was hounded and purged.

In the current circumstances, when it comes to the reality behind the Great Wall of China, it all seems trapped in a haze and maze of multiple contradictions, but no one really knows the real running story behind the iron curtain with total clampdown on freedom of expression and news. So much so, even the social media and internet is under State control. Indeed, an indiscreet or adventurous blogger, however anonymous, might land up in serious trouble if he-she, inadvertently, or otherwise, ruffles the feathers in the ubiquitous Chinese establishment. Undoubtedly, Big Brother is always watching.

However, something totally out of the ordinary is currently happening in China, which, till the other day, was celebrating its huge capitalist profit machine inside and outside the country, and, which had, since Deng Xiaoping, openly flaunted and encouraged the rise and rise of infinite private property and wealth, even while mass disparity and inequality was kept bottled-up and camouflaged by the iron fist of a dictatorial State apparatus.

Check out the bizarre events which have unfolded with its share of shadowy mysteries in recent times. It’s mind-boggling, and uncannily reminds of the dark memories of the cultural revolution.

Since the last two decades, top actress, director, pop singer and big business tycoon, beautiful billionaire Zhao Wei, has been a beloved of the country, a superstar bigger than the biggest names in Hollywood. Indeed, after capitalist reforms were ushered in the late 1970s, she had emerged as a national icon of the new ethos in China. Her films would gross millions in box office hits and her versatility and range as an actress was considered brilliant and kaleidoscopic.

Also known as Vicky, she was the catalyst behind award-winning and super hit movies, millions of her music albums were sold out across China and abroad, her big-time investments included hi-tech and entertainment ventures, while her fan-base almost hit the 100 million mark on Weibo, China’s microblogging site.

She was hailed with innumerable awards, and her personal earnings outstretched unimaginable heights. Her popular movies include, Lost in Hongkong, Hollywood Adventures, Red Cliff, Painted Skin, Dearest, Shaolin Soccer, My Fair Princess, Love, among others. She has been the main model of Fendi, the Italian fashion house, in China.

Besides, she was known to be a close buddy and partner of ‘Alibaba tycoon’, Jack Ma; she and her husband were apparently initial investors in Alibaba Pictures, with a $400 million stake, in 2015. It’s dark irony, that even Jack Ma seems to have suddenly lost his lustre in the eyes of the current dispensation in Beijing.

What is happening in Xi Jinping’s new China with its sudden new doctrine of ‘Long-term Common Prosperity’ with a deadly crackdown on big business, hi-tech companies, celebrities, top TV shows, and social media-online activities, especially among the young, therefore, acquires both sinister and mysterious overtones. And there are no two-minute answers, like Chinese noodles.

Zhao Wei has suddenly been banned in China, and no one knows why! Her name and references to her has been eliminated from social media platforms, film and television credits, from the media and social media: all the highly popular stuff associated with her iconic status in the film or television industry, including chat shows, have vanished into the blue, including from live streaming sites.

Another famous actor, Zhang Zhehan, has been banned as well. His name has been removed from the social media. One apparent mistake he has done is that he was seen in pictures visiting the Japanese shrine for those who died in the war: the Yasukini Shrine. Zheng Shuang, another box office hit star of the highly successful television serial, ‘Meteor Shower’ has been fined a whopping $46.1 million for tax evasion.

Online gaming has been strictly stopped, especially among the young, and severe restrictions have been imposed on the entertainment industry. Celebrating celebrities and ‘fandom’ too is a strict no-no these days.

Chinese authorities have openly announced that tax evasion by the rich and the celebrities will not be allowed – but China observers are wary of such quickly shifting high moral ground. These manifest signs of high morality in a country which has been brazenly celebrating its unbridled capitalism and economic conquests at home and abroad since the rapid economic reforms ushered in by Deng, are often too sudden, unpredictable and lacks rationality.

According to The Economist (October 16, 2021), ‘‘It is also true that the rich and famous are under harsher scrutiny than they have known for decades. Tycoons and film stars have received painful reminders that they enjoy their success at the party’s pleasure. Some have lost fortunes or seen careers ended for defying China’s leaders, or for provoking public opinion with displays of swaggering privilege. Others have hastened to donate money and time to patriotic causes. New rules ban effeminate actors from television and curb how many hours youngsters spend on video games. State power is now invested in one man, Mr Xi, in a way not seen since the Mao era. Whether issuing textbooks on Xi Jinping Thought to six-year-old children or using smartphone apps to ensure that officials study Mr Xi’s wisdom, the leader’s sternly paternal presence is felt in every corner of life…’’

Come September, even while the personality cult of Xi Jinping seems to be integral to the newest ‘manufactured consent’ across China, a new and interesting phenomenon has emerged at the grassroot level. Primary schools in China now have classroom indoctrination with ‘Xi Jinping Thought on Socialism with Chinese Characteristics for a New Era’. ‘Xi Yeye’ (Grandpa Xi) is looming large in the text books for pre-primary schools also. The tiny tots are too being told to listen to what Grandpa Xi is telling them.

The immortalisation of Xi Jinping, it seems, perhaps repositioning him as ‘President for Life’, is on – at full swing and fast forward – these days. Indeed, with his half-twisted, half-smile, hiding an indecipherable mind, only Grandpa Xi really knows – what he really wants.

It is nothing to surprise. It’s a clear scene of suppress of decent voices by the state, as in India and other countries.

1984 has become a reality indeed in China, where it was expected & not surprising, but also in the Modi-fied India!