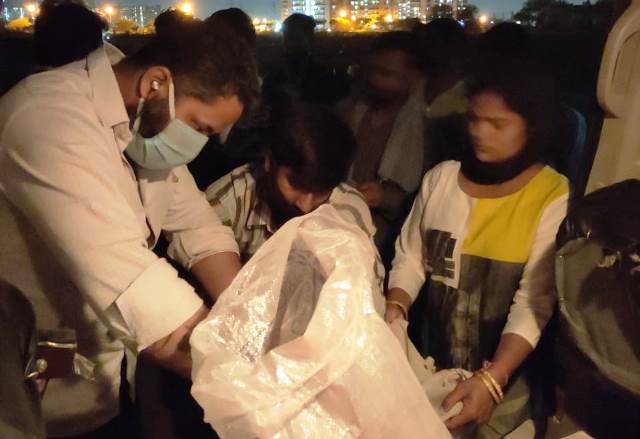 ‘They Built Our Homes. How Can We Let Them Starve?’

Ujjwal Mishra, a resident of Crossings Republic in Ghaziabad, UP, sought donations to feed the labourers lest they leave on foot during lockdown

I was sitting in my apartment at Crossings Republic (in Ghaziabad-NCR) and browsing through social media when I saw a Facebook post by one of my friends. This post mentioned a poor labourer family stuck with no ration and money, and a toddler to feed. I was moved by the simple words used in the post.

I asked myself how I let myself sit at home and cool my heels in the lockdown while hundreds of construction labourers living nearby go to sleep hungry. Worse, they could be forced to walk hundreds of kilometres to their hometowns, as was splashed in the media.

I began a local campaign and requested nearby apartments to donate dry ration. I used my SUV to collect these donations and stashed them in the boot. Next, with the help of some friends, I unpacked the donations and made smaller packets of rice, lentils, oil, salt, potatoes and other edibles. Then, I contacted local police to help me with transport and distribute the ration to the needy.

Police were helpful. They identified the areas where labourers needed help. Social media friends from far and wide too showed interest. I gave them the contact number of a local ration store from where they could place online orders and donate. Soon, my staircase, where I stored the donated ration, was full of stock. I worked late each day as there were too many families to feed.

As the news spread, both needy and the donors started calling me. Once, I received a call from a friend who told me that there were eight families who hadn’t eaten a meal since last two days. I rushed with ration packets, as well as some cooked food, in the night and reached them.

I realised that weekly dry ration works better for the needy to survive than cooked food. I kept a list of the places where ration was distributed as the packets would last for a week. I would re-distribute ration in the same areas, to the same labourers in order to refill their supplies. I made a promise to them that I would not let them leave for their hometowns in the lockdown.

ALSO READ: ‘I Want To Go Home, Uncertainty Is Killing’

Sadly, the builders have abandoned their labourers largely. These families don’t have much demands; all they need is essentials to survive the lockdown. I will request the government to allow people to work on this model– distribution and refill of ration– to stop the labourers from coming out on the streets or try to walk back home.

These are the ones who built our houses, roads, markets and all the concrete jungle we see today. We shall not let them and their children sleep hungry in such times of crisis.

Hats off brother. Such nice thoughts and execution of thoughts into real work. I live in noida extension. Kindly share your number so i can help in whatever manner i can do.

It’s an awesome job u r doing. Feels nice that somewhere I knw you.
Stay blessed.

This is an amazing contribution Ujjwal.. I really hope everyone does their bit and help the less fortunate during this difficult time.. God will bless you and I am sure your good karma and selfless act will go a long way.. Bless you Mr Mishra..

Good Job Ujjwal, if we have some more people like you in our community it will really be helpful for the needy person in this kind of Lockdown situation. Kuddos to you 👍👍

Proud of Citizens like him. Not only during corona but througout the Year he Is facilitating Clothes to the Poor and Needy. We wish him best of Luck and Please Please Donate , Your Donations will earn You blessings.

Necessary Functional Performance/Analytics Social
These cookies are essential in order to enable you to move around the website and use its features. Without these cookies basic services cannot be provided.
PHPSESSID
Cookie generated by applications based on the PHP language. This is a general purpose identifier used to maintain user session variables. It is normally a random generated number, how it is used can be specific to the site, but a good example is maintaining a logged-in status for a user between pages.
wordpress_test_cookie
Used on sites built with Wordpress. Tests whether or not the browser has cookies enabled
Technical Cookies
In order to use this website we use the following technically required cookies
These cookies allow the website to remember choices you make (such as your user name, language or the region you are in) and provide enhanced, more personal features. These cookies can also be used to remember changes you have made to text size, fonts and other parts of web pages that you can customize. They may also be used to provide services you have asked for such as watching a video or commenting on a blog. The information these cookies collect may be anonymized and they cannot track your browsing activity on other websites.
__cfduid
Cookie associated with sites using CloudFlare, used to speed up page load times. According to CloudFlare it is used to override any security restrictions based on the IP address the visitor is coming from. It does not contain any user identification information.
__cfruid
Cookie associated with sites using CloudFlare, used to identify trusted web traffic.
These cookies collect information about how visitors use a website, for instance which pages visitors go to most often, and if they get error messages from web pages. These cookies don’t collect information that identifies a visitor. All information these cookies collect is aggregated and therefore anonymous. It is only used to improve how a website works.
_gat_gtag_UA_2592650_1
This cookies is installed by Google Universal Analytics to throttle the request rate to limit the collection of data on high traffic sites.
_gat_gtag_UA_2592650_12
This cookies is installed by Google Universal Analytics to throttle the request rate to limit the collection of data on high traffic sites.
HotJar
_ga
This cookie name is associated with Google Universal Analytics - which is a significant update to Google's more commonly used analytics service. This cookie is used to distinguish unique users by assigning a randomly generated number as a client identifier. It is included in each page request in a site and used to calculate visitor, session and campaign data for the sites analytics reports. By default it is set to expire after 2 years, although this is customisable by website owners.
_gat
This cookie name is associated with Google Universal Analytics, according to documentation it is used to throttle the request rate - limiting the collection of data on high traffic sites. It expires after 10 minutes.
_gid
This cookie is installed by Google Analytics. The cookie is used to store information of how visitors use a website and helps in creating an analytics report of how the website is doing. The data collected including the number visitors, the source where they have come from, and the pages visited in an anonymous form.
These cookies are used by Youtube, Google, Twitter, and Facebook to deliver adverts that are relevant to you and your interests. They are also used to limit the number of times you see an advertisement as well as help measure the effectiveness of the advertising campaign.
Facebook
Youtube
Twitter
Google
__unam
This cookie is usually associated with the ShareThis social sharing widget placed in a site to enable sharing of content across various social networks. It counts clicks and shares of a page.
GPS
This cookie is set by Youtube and registers a unique ID for tracking users based on their geographical location.
Weather.io
Remember you weather Location
Decline all Services
Accept all Services
wpDiscuz
7
0
Would love your thoughts, please comment.x
()
x
| Reply