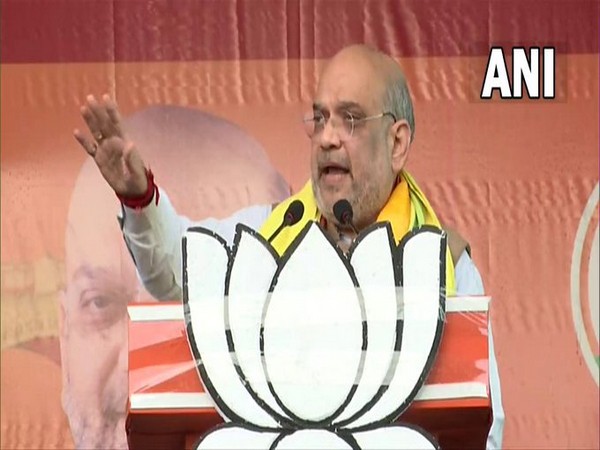 Amit Shah In J-K: They Tell Us Talk To Pak, I Say…

Lambasting the National Conference chief Farooq Abdullah and Peoples Democratic Party president Mehbooba Mufti on their demands that the Centre should talk to Pakistan, Union Home Minister Amit Shah on Wednesday said that he would prefer to talk to the youth of Jammu and Kashmir rather than talking to the neighboring country.

Addressing a public meeting here, on the last day of his three-day visit to the Union Territory which would conclude today, Shah launched an unsparing attack on former Jammu and Kashmir Chief Ministers Farooq Abdullah and Mehbooba Mufti.
He accused the ‘Gupkar alliance’ of “laying a red carpet” for Pakistani terrorists into the country.

Shah said, “Some people talk about Pakistan here. I want to tell them today, bring the statistics about the number of villages in PoK that have electricity. Electricity has reached every village in our Kashmir. “Mufti and Company, and Abdullah and Sons ruled Kashmir for 70 years but did not provide 1 lakh houses, but Prime Minister Narendra Modi, from 2014 till 2022, has given houses to 1 lakh people in J-K.”

“We do not have to follow the path shown by terrorists. I urge you to extend your support to us,” said the Home Minister.

Shah said that the “Peoples’ Alliance for Gupkar Declaration model” (PAGD) had presented the youth of the region with stones, closed colleges and machine guns in their hands, whereas Prime Minister Narendra Modi’s model has brought them education.

PAGD is a political alliance between the six regional parties in J-K formed by Farooq Abdullah and Mehbooba Mufti. The alliance seeks the restoration of Article 370 and statehood to Jammu and Kashmir.

“There are two models. One of PM Modi which gives employment, peace and brotherhood; and another is the Gupkar model which led to the Pulwama attack. PM Modi made a hospital in Pulwama at an expense of Rs 2,000 crore. The Gupkar model is laying the red carpet for the Pakistani terrorists into the country, whereas the Modi model is implementing an investment of Rs 56,000 crore on the ground giving employment to the youth. Gupkar model placed stones, closed colleges, and machine guns in the hands of the youth. Modi model has IIM, IIT, AIIMS, NIFT, and NEET for the youth. The youth wants education not stones in their hands,” he said.

Shah asked the former chief ministers about the amount that was brought into the region as an investment during their respective tenures.

“I have come today to ask Farooq Abdullah and Mehbooba Mufti how much investment did you draw in Jammu and Kashmir during the 70-year rule of the three families. How many industries were set up? How many youths were given employment? An investment of merely Rs 15,000 crore was done here in 70 years. PM Modi has brought an investment of Rs 56,000 crore in these three years in the region,” he said.

Shah further accused the “three families” of J-K of being responsible for the killings of the residents of the region by terrorists.

“Has terrorism done any good to anybody in the world? Can the sympathisers of terrorism tell of any such incident? 42,000 people of J-K have been victims of terrorism from 1990 till today. Who is responsible for their deaths? The three families that ruled here were responsible. Terrorism is moving towards extinction,” he said.

Lauding PM Modi for bringing investment into J-K, Shah said that the region which was known to be a “terrorist hotspot” has now become a “tourism hotspot”.

“Earlier, this was a terrorist hotspot, now it’s a tourism hotspot. You (Farooq and Mehbooba) gave stones and guns in the hands of the youth, whereas PM Modi gave laptops and mobiles into their hands by bringing industries here,” Shah said. (ANI)