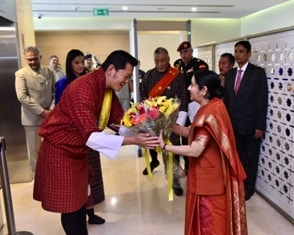 This Also Happened: A Lokmarg Roundup

Bhutan King on India visit: Bhutan King Jigme Khesar Namgyel Wangchuck, accompanied by Queen Jetsun Pema Wangchuk and Prince Jigme Namgyal Wangchuk, arrived on a four-day visit to India. On Wednesday, the King will meet President Ram Nath Kovind and Prime Minister Narendra Modi, who will host a dinner in honour of the royal family. The foreign ministry said the visit would provide an opportunity to review the entire gamut of bilateral cooperation, including plans for celebrating in 2018 the golden jubilee of the establishment of diplomatic ties, and to advance bilateral relations of friendship and cooperation.

Five killed in Kabul blast: At least five persons were killed and many others injured when an explosion ripped through Kabul’s heavily-fortified diplomatic area on Tuesday. The blast took place in Wazir Akbar Khan area. A terrified witness told Xinhua news agency that he saw more than a dozen people, mostly civilians, lying on the street, bleeding. No Chouhan in Vyapam chargesheet: The CBI has filed a chargesheet against 490 persons in the multi-crore Vyapam examination scam that broke out in Madhya Pradesh in 2013, while giving a clean chit to Chief Minister Shivraj Singh Chouhan. The bureau told a special judge in Bhopal that there was no tampering with a hard disk drive seized by the Madhya Pradesh Police in the case, dismissing an allegation by senior Congress leader and former Chief Minister Digvijaya Singh on this count. Sonia attacks Modi over intolerance: Congress President Sonia Gandhi attacked the Narendra Modi government over “rising intolerance”, saying that a discriminatory view of Indianness was being thrust upon the people and that the country’s heritage was in the hands of “those rewriting history, imposing falsehood and unscientific ideas”. In a speech read out by her son Rahul Gandhi at a function in which the 30th Indira Gandhi Award for National Integration was conferred on Carnatic musician T.M. Krishna, Sonia Gandhi said, “We must be undaunted, unafraid, and uncompromising against the forces of darkness that seek to engulf our land.” Court sets aside Praful election as AIFF chief: The Delhi High Court has set aside the election of Praful Patel as president of the All India Football Federation (AIFF) and asked for fresh polls within five months. A bench headed Justice Ravindra Bhat also appointed former Chief Election Commissioner S.Y. Quraishi the AIFF administrator.The court, while scrapping the election of the AIFF’s executive members, said that election was conducted without following the National Sports Code. No Brahmaputra tunnel, says China: China has  rejected a media report that Beijing is planning to build a 1,000-km tunnel to divert the Brahmaputra waters. “This is untrue. This is a false report,” Foreign Ministry spokesperson Hua Chunying said. “China will continue to attach great importance to the cross-border river cooperation,” she added. 200 die in mishap at N Korea nuclear site: As many as 200 North Korean labourers were killed after a mine shaft being dug at a nuclear test site collapsed, the media reported. The Telegraph quoted sources in North Korea saying that a tunnel being excavated by around 100 workers at the Punggye-ri test site crashed in early October. An additional 100 labourers sent to rescue their colleagues were reportedly killed when the tunnel suffered a second collapse, according to Japan’s Asahi TV. Fiscal deficit at 91% of 2017-18 target:  The Indian budgetary fiscal deficit over the first half of the current financial year — at Rs 4.99 lakh crore – stood at 91.3 per cent of the full year’s target of Rs 5.46 lakh crore, official data showed here on Tuesday. The data furnished by the Comptroller General of Accounts (CGA) showed that April-September fiscal deficit was 83.9 per cent of the budget in the like period of the last fiscal. (IANS)   //
MORE LM NEWS 24