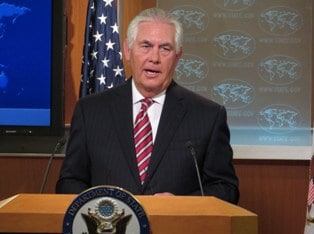 Tillerson asks Pakistan to step up war on terror

US Secretary of State Rex Tillerson on Tuesday told Pakistan that it must increase its efforts to eradicate militants and terrorists operating within the country. Tillerson, who was in Islamabad for a few hours on his inaugural trip to Pakistan as Secretary of State, met Prime Minister Shahid Khaqan Abbasi, and discussed the continued bilateral cooperation and partnership, expanding economic ties between the United States and Pakistan, and Pakistan’s critical role in the region, said a US Embassy press release. The top US official reiterated President Donald Trump’s message that Pakistan must increase its efforts to eradicate militants and terrorists operating within the country. To address those concerns, the Secretary outlined the United States’ new South Asia Strategy and the vital role that Pakistan can play in working with the United States and others to facilitate a peace process in Afghanistan that can bring stability and security to the region. The Secretary noted that Pakistan and the United States share common interests in establishing a stable, peaceful Afghanistan, defeating ISIS in South Asia, and eliminating terrorist groups that threaten both Pakistan and the United States. In all meetings with Pakistan’s leaders, the Secretary expressed appreciation for Pakistan’s sacrifices in the fight against terrorism. The Secretary also expressed his gratitude to the Government of Pakistan and the Pakistani Army for their cooperation in securing the release of the Boyle-Coleman family from captivity, the statement said. Abbasi also chaired an inter-agency meeting attended by Foreign Minister Khawaja Asif, Interior Minister Ahsan Iqbal, Minister of Defence Khurram Dastigir Khan, Foreign Secretary Tehmina Janjua, Chief of Army Staff General Qamar Javed Bajwa, ISI chief Lt Gen Naveed Mukhtar and other officials.

“Our relationship with Pakistan will be conditions-based”

Tillerson’s Islamabad stopover comes a day after he said that the US has made some “very specific requests” to Pakistan to take action to “undermine the support that the Taliban receives and other terrorist organisations receive in Pakistan”. Talking to journalists at Bagram Air Field in Afghanistan on Monday, Tillerson said that in Pakistan he will discuss US demands for securing Afghanistan and its conditions for continuing their relationship.

“We have made some very specific requests of Pakistan in order for them to take action to undermine the support that the Taliban receives and the other terrorist organisations receive in Pakistan,” he said. “And we’ve said in this whole strategy this is a conditions-based approach, and so our relationship with Pakistan will also be conditions-based. It will be based upon whether they take action that we feel is necessary to move the process forward of both creating the opportunity for reconciliation and peace in Afghanistan, but also ensuring a stable future Pakistan,” he said. “I think the US has made it clear in terms of our support for Afghanistan, support for a sovereign, unified, and democratic Afghanistan, charting a path to peace, prosperity, and self-reliance. It is imperative at the end that we are denying safe haven to any terrorist organizations or any extremists to any part of this – the world,” he said. He said the US wants to work with regional partners to ensure that there are no threats in the region and that the strategy is a regional effort. He also said the US seeks a broader role for India not just in the South Asian area but beyond it as a strategic partner across the Indo-Pacific region. “Our view of the relationship with India is one that’s of strategic importance not just for this specific region, but in the context of that speech it was about a free and open Indo-Pacific region stretching all the way to – from Japan to India,” Tillerson said. “So it’s a broader relationship.” Earlier, he met Afghan President Ashraf Ghani, Chief Executive Abdullah Abdullah and other senior officials at the airbase. (IANS) //
MORE LM NEWS 24