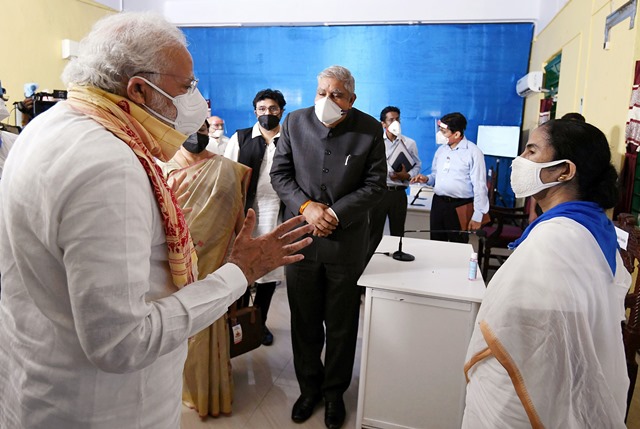 Prime Minister Narendra Modi on Friday announced Rs 1,000 crore relief package for West Bengal and Rs 2 lakh each for the kin of deceased and Rs 50,000 for the injured in the destruction caused by cyclone Amphan.

“Rs 1,000 crore advance assurance will be given to West Bengal. Rs 2 lakh would be given to the next of kin of the persons deceased and Rs 50,000 each to the persons who got seriously injured due to the cyclone in parts of West Bengal,” said the Prime Minister.

The Prime Minister said all aspects relating to rehabilitation, reconstruction will be addressed and the Centre will always stand with West Bengal in these testing time.

“We all want West Bengal to move ahead. Centre will always stand with West Bengal in these testing time,” he said.

The Centre will send a team to conduct a detailed survey about the damage caused due to the cyclone and the current situation of the affected areas of West Bengal.

Speaking about the aerial survey, which he conducted with West Bengal Chief Minister Mamata Banerjee, the Prime Minister said: “My thoughts are with all those who have lost their lives due to the cyclone. Centre and State are working together to provide all possible help to people. With the Governor and the Chief Minister, an aerial survey was done. They have also briefed me on the prevailing situation.”

Addressing the people of West Bengal, he said that the country is battling a COVID-19 pandemic on one hand and there is a cyclone situation in some parts. “Dealing with the pandemic requires social distancing whereas battling the cyclone requires people to move to safer areas. Despite these contradictions, West Bengal is fighting well. We are all with West Bengal in these adverse time,” he said.

Earlier in the day, Prime Minister Modi conducted an aerial survey of areas affected by cyclone Amphan in West Bengal.

The Prime Minister also conducted a review meeting in Basirhat with Banerjee, Governor Jagdeep Dhankhar and other state officials.

Announcing financial assistance of Rs 500 crore for Odisha after conducting an aerial survey, he said, “For the immediate need, the Government of India announces Rs 500 crore for Odisha, as a measure in advance. The Centre will further help Odisha government and make rest of the arrangements to come out of this crisis, after the complete survey and the formation of a rehabilitation plan.”

“The world is fighting a battle to save lives. In such a situation in India, all state governments, the Central government, and the people are engaged in the fight against COVID. In such a time, we had a super cyclone in some parts of India. This became very worrying. At the same time, thanks to well-established processes in Odisha, many lives were saved. I appreciate Chief Minister Naveen Patnaik and his administration,” said Modi.