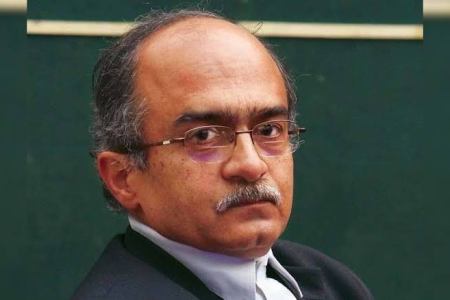 The Supreme Court on Monday slapped Re 1 fine on senior lawyer Prashant Bhushan in connection with a suo motu criminal contempt of court case over his tweets.

A bench of the apex court, headed by Justice Arun Mishra, said that Bhushan should be barred from practicing law for a period of three years and imprisoned for three months if he defaults on paying the fine.

The bench said that the court’s decisions cannot be influenced by the publications or opinions in the media and noted that Bhushan’s statements to the press even before they were considered by this court was to influence the proceedings.

Freedom of expression is there but the rights of others should also be respected, the bench said.

The top court had, on August 25, reserved its judgement on the quantum of sentence of Bhushan in connection with the case. Reserving its order on the sentence, Justice Mishra had asked the senior lawyer to tender an apology saying there is no harm in apologising if a mistake has been made.

During the hearing, advocate Dr Rajeev Dhavan had appeared for Bhushan and submitted that Bhushan has the highest regard for the institution but he has his opinion about last four Chief Justices of India (CJIs) about the way in which this court has gone wrong.

Attorney General KK Venugopal had said that several sitting and retired judges of the Supreme Court and High Courts (former) have commented upon corruption in the higher judiciary and suggested to let Bhushan go with a warning if he expresses regret for his remarks.

Bhushan was earlier this month held guilty of contempt of court by the Supreme Court for two of his tweets, the first one posted on June 29, related to his post on a picture of Chief Justice of India (CJI) Sharad Arvind Bobde on a high-end bike.

In his second tweet, Bhushan expressed his opinion on the role of last four CJIs amid the state of affairs in the country. Meanwhile, another contempt of court case against Prashant Bhushan is also pending before the top court. (ANI)