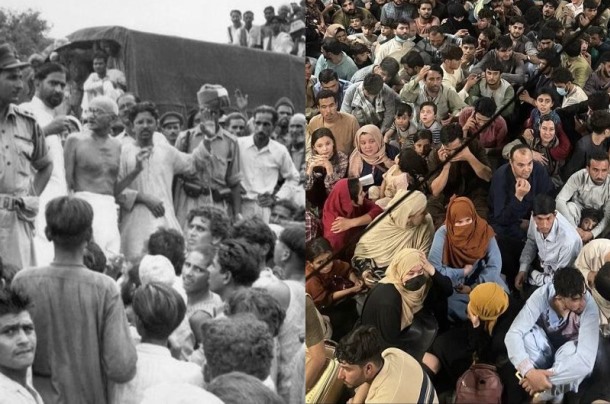 While Biden is being attacked all around for failing to organise the exit from Afghanistan more strategically to avoid sudden fall of the government and the dangerous fate that is potentially faced by the Afghans who worked for the Western administration, it is worth looking at the worst exit in recent history if not all of world history. The British withdrawal from India was so shambolic, insensitive and reeking of criminal negligence, that it left one million people dead in its trail.

As the British media and Parliamentarians finger-point at the United States, they conveniently forget the circumstances around 1947. Viceroy Lord Mountbatten was in charge. There was enough intelligence that weapons had been stored by various groups preparing for violence to ethnically cleanse on each side of the newly created India-Pakistan border. Party strategists on both sides wanted to make sure that their country had dominance of the community that it was meant for.

On Pakistan side, the Punjabi Muslims wanted Sikhs and Hindus out to avoid the country becoming a multiethnic-multireligious land. After all the idea of Pakistan was to create an independent country for South Asian Muslims, the Islamic nation. On the other hand, quite a few Hindus wanted to rid India off as many Muslim population as could so that India would be a Hindu dominant country. Most of the violence was in the Punjab. The Sikhs were caught in between but sided with Hindu India and bore the brunt of violence in Pakistan side of Punjab. On the Indian side of Punjab, Muslims suffered immense violence.

It wasn’t the first time communal violence had taken place in India. But the British not only didn’t plan for it, the British Indian Army stayed in its barracks while massacres were going on around them in hundreds of thousands. Timely planning for massacres and strategic intervention and control by the army could have prevented most of the violence, admittedly not all. A highly disciplined army that respected its British officers would largely have ensured that violence was contained rather than become a pandemic.

Mountbatten managed to save almost every British life and the British walked out of India without loss of life.

Interestingly, the blame for the violence has been put on Indians, religion, lack of civilisation, inexperience of leaders such as Nehru and Jinnah etc. No blame has been appropriated on the negligence of the British administration. So successful has been this narrative that even Indian and Pakistani academics continue to concentrate their writings on the senseless violence and have internalised the blame upon their own communities. They blame the British for communalising politics but not for mindless inaction at the time.

The British Press and politicians seem to have developed a convenient amnesia about British handling of the Indian exit as they queue to gloat at Biden and his sudden decision to leave Afghanistan without apparent preparations for a sudden collapse of the Afghan Government.

Compared to what happened in 1947, the USA has handled the Afghan exit with extraordinary dexterity. It immediately sent in about 5,000 troops and has now vacated over 100,000 Afghans and American citizens. It has enabled other countries to vacate their people too.

The Americans have handed control to the Taliban but also remain in talks with them to avoid the situation getting worse. Compare this to 1947. A million people died in the massacres.

It is inevitable anywhere in the world, be it India, Britain or USA, that if the agencies responsible for ensuring order are withdrawn, then chaos and violence ensues. Chinese whispers exaggerate the smallest incident and then develop a life and trajectory of their own. That is what happened in 1947. The organisation that was supposed to ensure order, the British Indian Army, failed in its duty and stayed in its barracks under direct orders to do so.

In Afghanistan 2021, the Taliban quickly stepped in to ensure law and order. It took over when the Afghan National Army absconded and left the streets potentially to mob rule, criminals and waiting Islamic State jihadis among others. The Taliban immediately filled the vacuum as the western backed President, Ashraf Ghani, ran away. The Taliban have also cooperated in letting Americans and other western countries to take their citizens and those who worked for them in flights from the main Airport in Kabul, called Hamid Karzai Airport.

A lot of arm chair generals have a lot of advice on how Biden could have handled the exit better. A great deal of this advice is coming from the British press, British politicians and commentators, not least British Generals. The USA has not yet explained why it left in a hurry. The attack at the airport on 26th is perhaps one of the possible factors in the calculations. Perhaps the United States knew that the Afghan Army would not be able to handle the growing menace of ISIS and decided that it is best dealt by the Taliban.

A gradual exit would have meant the USA would have had to broker a deal between Taliban and the Afghan Government. The Taliban was in no mood to negotiate with them. It was best to leave and let matters unfold. Whether there will be violence in the near future or not is too early to say. The Taliban has its own problems with foreign Jihadis wanting to use the country as a base and get their hands on the vast armoury left behind by the Americans. While the liberal press is rummaging about Biden’s failure to ensure women rights, education and human rights based law, the region is facing a descent into something similar to the crises that led to the establishment of Islamic State in Iraq.

Whatever happens, one fact should be obvious. A bit of humility on part of British press, politicians and pontiffs would be appropriate. The American exit from Afghanistan in 2021 so far is no way as disastrous as the British exit from South Asia of 1947. The reality is that it was derogation of responsibility on part of the British administration that led to a fermenting communalism to reach such heights of insane violence. It is a wonder that no victim of that period ever thought of bringing charges of criminal negligence against the British Government. That may have put the two exits in perspective.