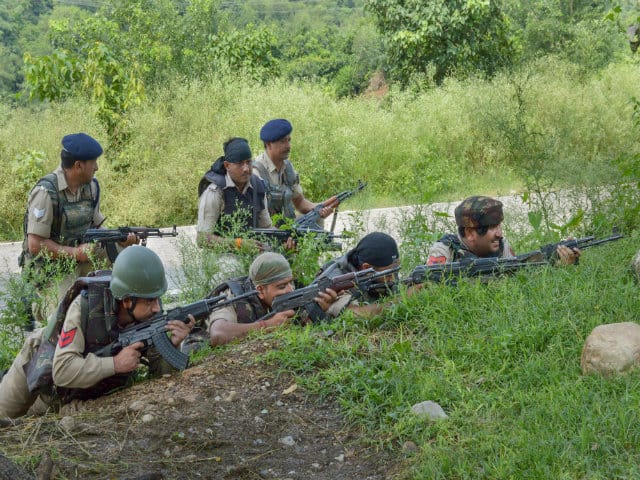 Security forces on Saturday shot dead three terrorists who were holding hostage a civilian inside a house in Batote town of Ramban district in Jammu. The hostage was rescued safely.

One Army personnel was killed in the joint operation conducted by Army, Jammu and Kashmir police and CRPF officials in the Jammu-Srinagar Highway town.

Two Army personnel and one official from the Jammu and Kashmir police also sustained injuries in the encounter with the terrorists, which had been going on since the morning.

“Three terrorists have been killed. The hostage has been rescued. Two police officials sustained bullet injuries and an Army personnel died. Operation is over now. They are the same terrorists who were seen in the morning,” Jammu Inspector General of Police (IG) Mukesh Singh told ANI.

Three terrorists entered a house in Batote in the morning while attempting to flee the security forces after engaging in a gunfight with them.

The encounter started after two of three terrorists tried to stop a civilian vehicle at Batote on the National Highway (NH) 244 but the owner did not stop the vehicle and informed the Army Quick Reaction Team (QRT).

Joint parties of Police, Army, and CRPF cordoned the area and exchange of fire ensued during which terrorists took shelter in a house.

“We got the information that terrorists have held a civilian hostage. We attempted to persuade terrorists to surrender. They refused to surrender even though they initially said they would. Their motive was to delay. SSP Ramban gave them a final warning to surrender and later we took action. It was a neat and clean action. Three terrorists have been eliminated and the hostage has been rescued,” Deputy Inspector General, CRPF PC Jha said.

Earlier, Army had the information of “possibly” five terrorists inside the house where they had taken a local resident hostage.

“One Mr Vijay (also known as Vijay Tailor) is a hostage in the house where the terrorists are holed up. The complex has an electronics shop in the front and house towards the rear. Vijay is the owner. Possibly five terrorists inside the house. They have so far refused to surrender. Exchange of firing is going on,” Army said in a statement earlier.

Two AK rifles and one pistol were recovered from the possession of terrorists. (ANI)