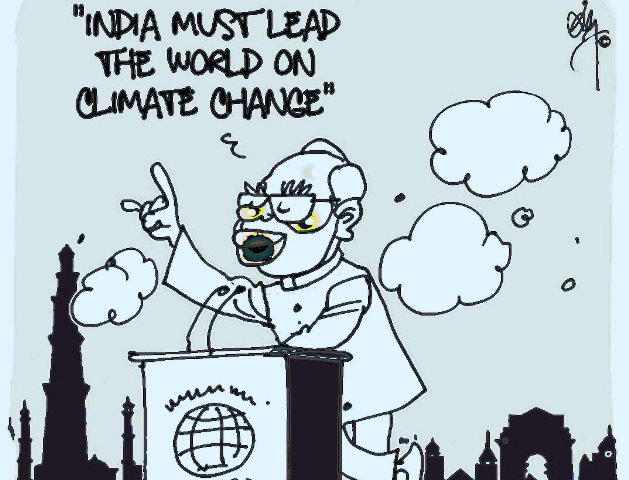 With seven of the world’s ten worst polluted cities in India, the country has set an example as how not to handle climate change

When PM Narendra Modi said India will lead the world in climate change, someone from Ministry of External Affairs should have told him that the nations of the world were trying to reverse climate change, not make it worse. With seven of the world’s ten worst polluted cities in India, the country has certainly become a leader. It is the wrong leadership. Modi should declare a climate emergency and set up a special committee to propose urgent and long term measures at reducing the high rates of pollution. Otherwise India is fast becoming a sick nation with the children of today facing a lifetime of diseases. Even the Supreme Court has expressed concerns in strong and emotive words.

Air pollution is no small thing. Even small particles get into the lungs and then into the blood stream. But with air pollution levels reaching AQI of 999 micrograms in some areas of Delhi, the lungs of young India are in danger. So is the future of India.

Two particle pollutants are generally used as indicators. PM10 are particles less than 10 micron in size. PM2.5 are particles less than 2.5 microns in size. 10 microns is 0.01 mm, about a hundredth size of a hair! The windpipe, or trachea and then bronchus, have small hair cells (not like real hair) that act as sieve and clean the air. But many of the particles get through. Particles smaller than 2.5 microns go into the end portions of the lungs, clogging them up. Some go into the cells and some even into the blood stream. Carbondioxide, nitrogen dioxide, sulphur dioxide can all go through the cells.

If the lungs are full of a coat of this dust, it is not difficult to understand the immediate effects. Less Oxygen gets inhaled. Transfer of gases is affected. Headaches, nausea and above all lung disease such as Chronic Obstructive Airways Disease eventually hit the poor lung. Above 900 AQI is the equivalent of smoking 25 cigarettes a day! What is the point of anti-smoking drives, if the Government then permits effects of smoking through pollution!

Cancer of the lungs is another major effect of high polluted air. Asthma is the most common disease that children develop in polluted air. Some studies have shown that a shocking one in three children in Delhi have lung disease!

Lung disease is not the only consequences of air pollution. Cardiovascular disease, that is heart attacks, clogged up arteries, poor circulation, slow minds and blood pressure are some of the illnesses resulting from poor air. What is the point of all those national ‘yoga days’ with politicians pointing their legs in the air and expanding chests, if the government’s lack of policy is killing people even when they do the best of yoga exercises?

Pollution affects lymph systems that is the defence mechanism of the body against infections and early cancer etc. In fact lymph cancers are also high in highly pollutant areas as is a propensity to infections.

In ten years’ time as the children of today grow up, they will have poor lungs, poor health and more prone to heart disease. In later life many may develop lung cancer and generally lack energy. What exactly is India growing into. India is slowly asphyxiating itself. Lack of proper policies is choking the India of tomorrow.

The normal levels of AQI should be around 25. Below 50 is still considered to be good. AQI of 50-100 is moderate. Some countries take this very seriously as the population can start to develop some of the symptoms.

Taken as average through the year Delhi has an AQI of around 195. This is still very high. The costs of ill health are very high. Medical costs, a nation full of sick adults, inefficiency are only some of the effects pollution will have on the national development.

The Government must set up an emergency task force to explore all methods of reducing the Air Quality Index from the high 900 to below 50 maximum.  It must bring in experts from around the world. It needs to set targets. Otherwise all that talk of 5 trillion economy and the greatness of India will be a dream shattered by low life spans and high medical costs.

The cities of India are where they are due to poor planning, poor grasp of the consequences of polluting vehicles and burning farm stubs. There is no excuse not to reverse this and undo the damage as well as contain the pollutants.

For Prime Minister Modi to lead the world in climate change, his government will first have to take the lead in reversing the damage that has been done so far first.