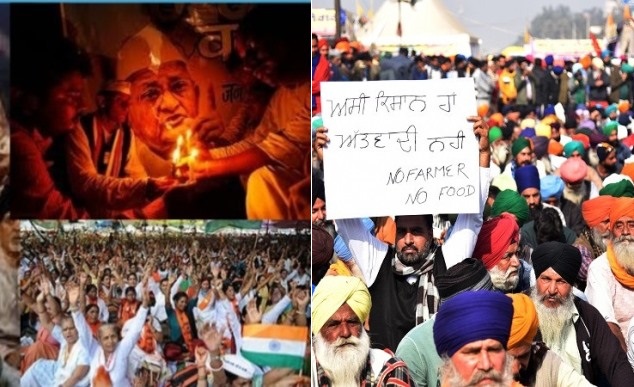 A Tale Of Two Indian Protests In Media

About a decade ago, an anti-corruption protest in national capital Delhi provided the cue for several others across India. These protests, under the banner of India Against Corruption, and their mishandling by the Manmohan Singh government would go on to create the space for Narendra Modi’s 2014 swoop into the prime ministerial chair.

Till the anti-corruption protests happened, a common, now forgotten grouse was that the principal political opposition outfit, Modi’s Bharatiya Janata Party (BJP), wasn’t doing enough to corner the Singh government. It is tempting to see contextual similarities with the present – the farmers’ protests are happening at a time when there’s much moaning about a weak opposition – but this piece focuses on something else, crucial differences in how several major TV news channels have treated the two sets of protests.

Remember how the channels covered the anti-corruption protests? Parked 24X7 at protest sites, they told us of the action unfolding on the main stage and in the sidelines, the upset and passion that was pulling the crowds, the celebrities lining up in solidarity, the wanting negotiating table manners of the government.

They reminded the government of its democratic duty to listen and be flexible, took exception to police excess, refused to lend credence to theories about the protestors being unreasonably maximalist or being backed by anti-national forces. (Yes, the anti-national card was around then too. It wasn’t as weaponized as it is now though.)

In contrast, the farmers’ protest has found sympathy scarce in TV news rooms. Touching human interest stories, the kind that inspire and sustain participation in popular movements, abound but aren’t being told. Few channels are exhorting the government to act conciliatory, show heart. There are dark speculations about why farmers are not availing the government’s supposed generosity. And certainly government spokespersons aren’t being hauled up for insensitivity to the farmers’ cause, protestors’ deaths in the biting cold, or the unprecedented events of Republic Day. In the Singh era, ministerial heads were demanded – and furnished – for a lot less.

The difference is clear. In the case of the anti-corruption protests, the channels amplified the protestors’ voice, did not allow the government line to drive the narrative, played a key role in pressuring the government to persist with a difficult dialogue and eschew sharp tactics.

With the farmers’ protests, the government narrative has enjoyed disproportionate play, and nobody is really nudging the government into a sincere, sustained conversation or enjoining it to avoid coercive action. If anything, it has sometimes looked as if an assertion of state might is being advocated. Things would have been worse if not for a few honorable exceptions in the TV news business and some gutsy freelancers.

This isn’t the first time in recent years that news channels have trained their guns on an anti-government stance. The eagerness with which most have defended, indeed endorsed, the government’s positions and the ferocity they have reserved for its detractors have played a critical role in elevating the Modi persona and shoring up the BJP’s electoral fortunes despite an indifferent performance on several key fronts.

More importantly, they have given the government confidence to push ahead with contentious proposals, without fear of bad press and consequent electoral hurt. The danger a government, any government, anywhere, insulated from media criticism and voters’ anger presents is not difficult to imagine, and it is unconscionable on the part of the media, any one for that matter, to be complicit in such a project.

Am I overstating the influence of TV news, undermining the wisdom of the voter, and shooting the media-messenger here? No. Just consider the reach of TV news, the attractions of its immediacy and presentation, the subconsciously accepted authority of the reporter, anchor, and expert, the impact of incessant exposure over months and years to bias-ridden, rarely establishment-challenging messaging.

Much has been said about how things have come to such a pass. Blame has been laid on a mix of ownership changes, the demands of delivering ratings-driven, free content, and the emboldening in non-inclusive newsrooms at a time when casteist and communal sentiment is finding disturbingly open expression and approval all around.

The path to recovery, at least to a state where the TV media (others too) can bring itself to bat for the underdog, interrogate the government, and pursue an independently determined interpretation of national interest, isn’t going to be easy.

At this point, there appear no strong incentives, moral or commercial, among the errant to self-regulate. There is little reason for the government to disturb things as they stand either. Plus, governmental regulation, in any case, can be a double-edged sword and needs to be approached with caution.

None of this is compelling reason to give up on regulation options, but they do make a case for citizens to examine their own relationships with news channels, patronize non-partisan electronic media and print and digital publications that speak for the people, reject divisive and establishmentarian voices. It isn’t tough to find the ones to back, and the remote and subscription plan can be potent tools. It is time to stop being the subjects of mind control exercises. It is time to stop passively soaking the news. It is time to make it.