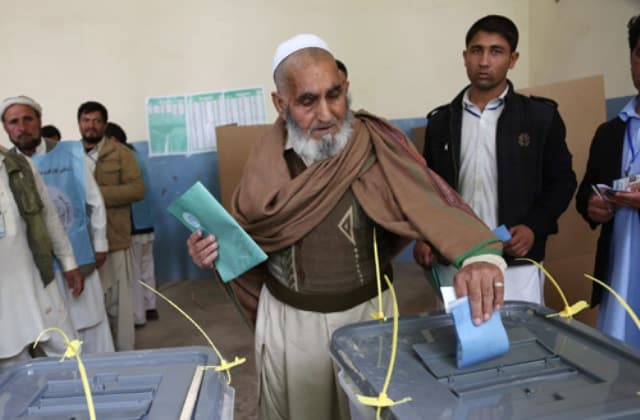 Amid the threat of Taliban, millions of Afghans including several prominent leaders came out to vote in the country’s third presidential election on Saturday, despite skepticism about transparency and Taliban threat.

The incumbent President Ashraf Ghani who is seeking re-election was quoted as saying, “I thank all Afghans for their commitment to democracy and to a prosperous and sovereign Afghanistan. Participation in the elections indicates a commitment to the Constitution of Afghanistan. Elections determine the continuation of the democratic system in Afghanistan.”

The Afghanistan President made the remarks after casting his vote in Amani High School in Kabul.

Paying tributes to Afghan National Security and Defence Forces, the President said, “Afghan security forces are our pride and they have shown their commitment to the Islamic Republic of Afghanistan.” He also thanked women for their participation in the elections.

“Our plan for peace is ready, at the moment we are awaiting the verdict of the nation,” said Ghani.

Independent Electoral Complaints Commission (IECC) chief Zuhra Bayan Shinwari was quoted as saying that this was a “historic day for day for Afghanistan and our people.”

Several thousand Afghani Forces have been deployed across the country to provide security. The tight security is to counter possible threats by militants who have vowed to disrupt the poll process.

Earlier in the day, a blast had hit a polling centre in southern Khandahar city.

Almost 9.6 million people had registered to vote in the election, according to Independent Election Commission.

The road to the polls has been anything but certain, as a series of talks between the United States and the Taliban in the Qatari capital, Doha, threatened to derail the entire process, reported Al Jazeera.

The constant questioning of the polls continued until US President Donald Trump sent out a series of angry tweets declaring the talks dead after a Taliban-claimed bombing that resulted in deaths of at least 14 Afghan civilians and a US soldier.

Those tweets came just 20 days before the Afghan election.

The New York Times reported that preliminary results of the elections are not expected to be announced until October 17 and final results until November 7.

Afghanistan’s last presidential election, in 2014, was so stained by corruption, squabbling and fraud complaints that then-Secretary of State John Kerry stepped in to mediate a strained political marriage between the two top candidates, Ghani and Chief Executive Abdullah Abdullah — the leading candidates in this vote, as well.