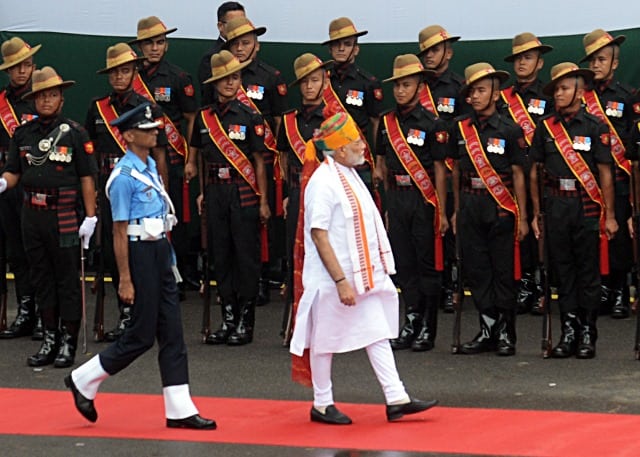 Having announced the welcome post for a Chief of Defence Services, the Prime Minister must now integrate the Services HQs with Defence Ministry wherein officers and bureaucrats will sit side by side as equal partners

From the ramparts of the Red Fort in his 92-minute Independence Day speech, the Prime Minister has finally announced the appointment of Chief of Defence Services (CDS) post for the three services. The crying need for the post was felt after the 1971 Indo-Pak War wherein with the consent of the Indira Gandhi Government, Gen SHFJ Manekshaw performed the duties of the CDS for the duration of the war. He was also promoted to Field Marshal, a Five Star General on his retirement. This much-awaited appointment is a welcome step for deteriorated civil-military relations wherein the three services are denied direct access to the Raksha Mantri (RM) and they have to pass through the tinted filters of an under equipped and qualified bureaucracy.

Based on the arrangements in most of the democracies of the world, it was always felt that a single point advisor to the government representing all the three services for all aspects of operations, training and procurement was paramount. The CDS had to be senior to all the serving Chiefs to be effective and as such should be a five star general who would have a direct access to the Raksha Mantri (RM). The bureaucrats in the Ministry of Defence (MoD) were always wary of this arrangement and were against the appointment as their implied authority over all the three services would be diluted. Although, the Chairman Chiefs of Staffs Committee was the right man to perform in absence of the CDS, in various UPA Government tenures, the Defence Secretary, who is lower in status to the three Chiefs was performing this task by default; without adequate in-depth knowledge of the three services, only because he had direct access to the RM.

Successive governments continued to defer the appointment of CDS on the ill advice of the bureaucracy. Thanks to the then BJP Government headed by Atal Bihari Vajpayee to have formally identified the need of having a CDS after the Kargil War. The Group of Ministers in the Kargil Review Committee recommended that a Five Star General should be appointed as the CDS. The appointment was related to the integration of services headquarters with MoD as is prevalent in most of the democratic countries of the world.

It is to the credit of the three services that they started preparing the framework of the CDS Secretariat and integration of the services headquarters with MoD. The services set up a joint integrated Headquarters named the Integrated Defence Staff (IDS). IDS has been effectively and efficiently functional for over a decade now and is headed by Chief of the Integrated Defence Staff (CIDS); an Army Commander level Officer in rotation from the three services, who would eventually be the deputy of the newly appointed CDS. Presently, the CIDS reports to the Chairman Chief of Staff’s Committee who is the senior most services Chief and holds two hats in this rotational appointment. The newly appointed CDS will just have to walk in and “plug and play“the role as he already has an effective team in place.

The NDA.1 government identified the need to have a CDS and the late Manohar Parrikar on taking over as RM had promised the services that he would soon get a CDS appointed. However, the three services Chiefs were not on the same page as IAF opposed the idea. The IAF and Indian Navy, because of their smaller sizes, were always scepticle that this post would generally be held by an Army Officer and their priorities of modernisation and acquisitions may be relegated or kept on the back burner. In the Israeli Army in the 2005 war with Lebanon the CDS was from the Air Force and Israeli tanks suffered heavy casualties due to an unorthodox use of missiles fired from basements and windows of houses by Hizbulla. It was then decided that CDS would always be appointed from the Army and is usually from the Special Forces.

Due to his proximity with the PMO, NSA Ajit Doval has been willy nilly performing the duties of the CDS from Pathankot Incident to surgical strikes to Balakot and now abrogation of Article 370. While it may be acceptable for internal security situations to have an ex police officer taking charge of the situation, for an external threat he would woefully fall short. PM needs to be congratulated for not succumbing to the suggestion of a four star general to the job because Chairman of Chief of Staff Committee, a four star General is presently performing the duties and cannot be very assertive on the other two chiefs of the same stature.

Ideal choice for the first CDS are two learned and very well read Generals who have retired in the last two years and are still current. The first one is Lt Gen Praveen Bakshi who was wrongfully denied the appointment of the COAS in spite of being capable, and the second choice is Lt Gen DS Hooda who was at the helm of Northern Command during the launch of surgical strikes. Otherwise, a serving Chief may be promoted and another chief appointed in his place. The front-runners amongst them are the Air Chief BS Dhanoa after Balakot and the Army Chief Bipin Rawat. Government will do well if they appoint the first CDS who is a visionary and acceptable to all services.

The new RM Mr Rajnath Singh needs to be congratulated on rolling back of income tax levies on disabled soldiers and announcement of appointment of CDS within three months of his taking over. He needs to restore the confidence of the serving military soldiers in their government who has been systematically relegating their rightful stature in NDA 1 period. Since the Central Police Forces Officers have already been granted Non Functional Financial Upgradation (NFFU) and the services have been denied the same; the elite defence services have for the first time in history of India been relegated to a position below the CPOs. This does not augur well for the morale and motivation of the defence forces of a country which aspires to be a regional power within a decade.

The modernisation and acquisition plans of the defence services need an immediate impetus with infusion of necessary funds. This is also the ideal time to integrate the services headquarters with MoD wherein services officers and bureaucrats will sit side by side as partners and MoD will stop pretending to be a higher Headquarter. Lots of overlapping will be removed with savings to the defence budget and efficiency and accountability would be ensured.

The appoint ment of A CDS is a weak ploy unless the rules of business and transaction of the govt are rewritten and the unaccountable Babu defence secretary who is responsible for the defence of the nation is divested of this power and the CDS and theatre cdrs CINCs are made responsible. For this to happen the financial powers of Capital and revenue budgets will have to be delegated to them and this means the defence secretary will be be rendunt and must go .

I strongly support the views of Gen Ike Singha