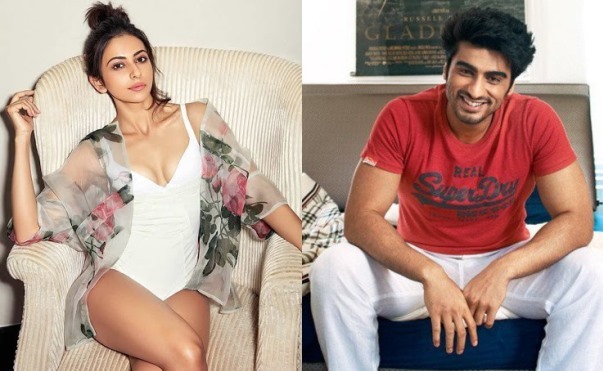 Arjun took to his Instagram handle and shared the music video along with the caption, “Annnnnd it’s here guys! The bomb that I have been waiting for is all set to make a blast! #DilHaiDeewana is out now! Tune in now!”

The premise of the video is that Rakul, who only likes bad boys, is the manager of a company where Arjun works and is head over heels in love with her. It then shows him daydreaming about dancing with his lady love throughout various sequences of the video. At the end of the video Arjun, even though a good guy, is able to get a date with Rakul.

Regarding the song, it features undertones of Anil Kapoor’s popular tune ‘Dhina Dhin Da’ from the film ‘Ram Lakhan’ and is overall a catchy and peppy number, well-suited for a Bollywood dance night.

‘Dil Hai Deewana’, composed by Tanishk Bagchi and penned by Shabbir Ahmed, reunites Arjun with his ‘Aurangzeb’ co-star turned singer, Zara Khan, who has lent the female vocals for the song along with Darshan Raval. The music video of the song has been directed by Radhika Rao and Vinay Sapru.

Earlier, Arjun had shared the teaser of the romantic dance track that was recently shot in Mumbai. He had also later divulged that it was his dream to someday get to work with Darshan, as he had been floored by the singer’s performance in 2014 at a popular reality singing show, where Arjun was a guest judge.

Meanwhile, on the film front, Arjun and Rakul will be seen together in the Netflix movie ‘Sardar and Grandson’, directed by debutante filmmaker Kaashvie Nair. The film also stars Aditi Rao Hydari and John Abraham in pivotal roles.

Apart from that, Arjun who was recently seen in ‘Sandeep Aur Pinky Faraar’, co-starring Parineeti Chopra, also has ‘Ek Villain Returns’, and ‘Bhoot Police’ in the pipeline. Rakul also has an interesting line-up of films like ‘MayDay’, ‘Doctor G’ and ‘Thank God’. (ANI)