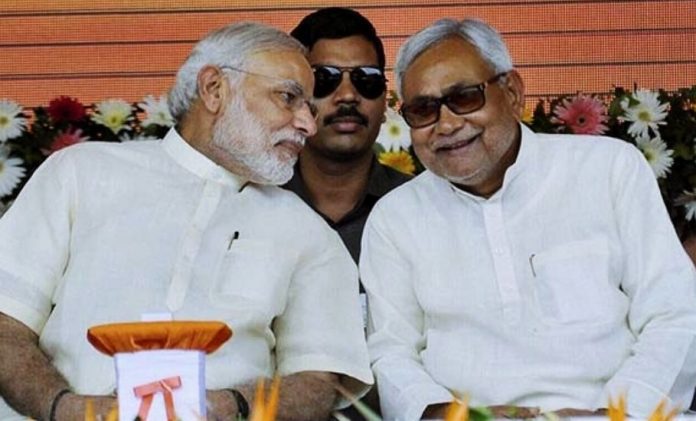 Suddenly, the National Democratic Alliance (NDA) seems to find itself in a Catch-22 situation in Bihar, surrounded by a complex web of failed tactics, rapidly shifting electoral patterns and a slippery ground beneath its feet. Even its poll planks seem to be not clicking in the manner in which it had hoped they would, like providing the mythical Corona vaccine ‘free’ to the people in Bihar.

With an incumbent chief minister on a sticky wicket, how far will the charisma of Prime Minister Narendra Modi succeed in a highly polarized state, remains a puzzling conjecture. Ironically, the current situation has only emerged in recent days, because in the pre-poll scenario it all seemed hunky dory for the NDA, and they were pretty sure that they will romp home comfortably in the polls, and Nitish Kumar will therefore continue his reign after 15 years of rule in Patna.

So what happened in a state which is credited by seasoned journalists as politically extremely smart and sharp, though entrenched caste equations, loyalties and hierarchies, and remnants of feudalism still rule the roost in the hinterland? What is the reading on the ground?

There is a view that Modi’s TRP ratings remain reasonably high despite the economic slump and mass unemployment, though there is no survey which can prove that. It is also a view that the collapse of the administrative and health system post corona and the migration of thousands of migrant workers to Bihar, and the ‘reverse migration’ thereafter post lockdown, and the crass insensitivity and inefficiency displayed by an inactive Nitish Kumar government, will not really make an impact on the voting patterns. Indeed, this remains an open question.

According to reports, even insiders in the ruling alliance feel that the migrant workers carry a grudge against the Bihar government, and their sense of hurt is bad news for the NDA. Several jobless workers have finally returned back to an uncertain future in the cities, knowing fully well that they will neither be protected if attacked by the virus, or in terms of employment and an economic cushion in their home state.

The important factor going against the incumbent chief minister is that he seems to have lost a lot of credibility in terms of administration and ideology. He won the last assembly elections in alliance with the RJD of Lalu Prasad and Congress. Despite the RJD being a bigger party in terms of MLAs, Lalu was magnanimous to give the chief ministership to Nitish Kumar. Earlier to that Nitish Kumar did a great hullaballoo about keeping a ‘safe distance’ from Modi, presumably to protect his alleged ‘secular’ credentials, and so that the minorities choose to vote for him, especially the poor Muslims he had cultivated along with extremely backward castes and Maha-Dalits. So much so, ‘Sushasan Babu’ positioned himself as a PM contender to Modi, though he chose to stay in the NDA government even after the Gujarat killings of 2002, even while someone like Ram Vilas Paswan quit the government in protest, only to rejoin later under Modi.

Now, the late Dalit leader’s son, Chirag Paswan, is giving a hard time to Nitish Kumar, attacking him directly, while fielding candidates against the Janata Dal (U) across the state. So much so, several BJP leaders, either rebels or those denied tickets, have been fielded by Chirag Paswan. There are reports that the upper castes, who are with the BJP, have chosen to vote for Chirag Paswan’s candidates wherever JD (U) candidates are contesting. There are also unconfirmed reports that Chirag Paswan, who hails Modi as his leader, has been propped up by the BJP to cut Nitish Kumar to size, despite the BJP rhetoric of backing him as the next chief minister.

In this dubious strategic shifts, finally, the loser will be the ageing current chief minister who seems to be losing his cool even in his own rallies, whereby he has been heckled in some of them. “Don’t vote for me, go away,” he shouted back at the hecklers from the dais – not a happy sign for a chief minister.

Besides, all the good he has done in the past, like law and order improvement, lack of corruption, prohibition, and schemes for women such as cycles for school girls, seems a distant page from the distant past. His current tenure, especially after he betrayed Lalu Yadav, has been lackluster. He has been hemmed in by his partner, the BJP, even while the ex-PM contender easily gave away all his high moral ground to the superiority of Modi in Delhi.

The prohibition card has boomeranged, and women are not at all happy with it. Apparently alcohol is easily available in the black market, as is the underground reality wherever alcohol is banned. Women complain that earlier their husbands were drinking outside, now they drink in the ‘safe confines’ of their homes. Poor households run by women are feeling terribly let down.

The roads which he built in his first term seem to have cracked after 15 years and the bureaucracy he trusts seems to have lost its moorings. Corruption has apparently returned from the back door. However, the starkest is the bitter realism of mass unemployment and abysmal lack of industrial or economic growth in Bihar in the last 15 years. Voters who were children when Nitish Kumar started his innings are now young adults and they don’t find any spark of optimism in their own state, either in education, health services, social infrastructure or employment generation.

Poor communities and landless labourers continue to migrate, and often face harsh and difficult circumstances, with low, unpredictable wages and no fundamental rights. The stagnation in agriculture and old structures of oppression continue to simmer in many places, even as some things just refuse to change. Dalits and the extremely poor with aspirations find no scaffolding or avenue to grow out of their unhappy reality.

Tejeshwi Yadav has promised 10 lakh jobs. It has clicked across the youth, forcing rival NDA to promising a higher number of jobs. The young leader’s rallies are attracting huge crowds, but rallies are not the real indicators of voting patterns. The emergence of the Left, especially the CPI-ML (Liberation), in almost 25 seats, with its strong and committed base among the poorest and the working class, has given an impetus to the Mahagathbandhan of RJD, Congress and the Left. The CPI-ML can help in scores of constituencies, and its radical presence itself has given a distinct pro-poor flavour to the opposition alliance.

With Nitish slipping, will Modi take the centre-stage, and will Article 370 and China threat click? Recent history shows that in assembly elections, Modi’s popularity does not work. Be it Maharashtra, Rajasthan, Chhattisgarh, Punjab, Madhya Pradesh, even in Manipur, Gujarat, Goa and Bihar, the BJP did not do well in the assembly elections. In some states they formed the government by hijacking MLAs, as in Goa, Manipur and MP. So the Modi card might have limited use in a state which had actually voted overwhelming against the BJP and its supreme leader in the last assembly polls.