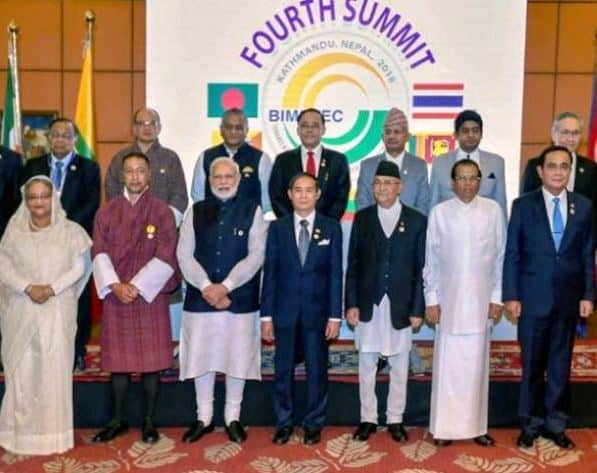 Invitation to BIMSTEC, outlines Modi government’s strategy of ignoring Pakistan and proceeding ahead with a cooperative attitude in the South Asian region

Narendra Damodardas Modi is set to be sworn in for a second consecutive term for five years as the Prime Minister of India on the 30th of May 2019 with a massive mandate from the electorate. In terms of Foreign Policy, the last term was defined by a sustained emphasis on the South Asian region through the ‘Neighbourhood First’ Policy. The phrase was outlined after his invitation to the South Asian Association for Regional Coopertation (SAARC) heads of state during the inauguration of his first term.

The second inaugural ceremony will see heads of state from the Bay of Bengal Initiative for Multisectoral Technical and Economic Cooperation (BIMSTEC). This has significance for India’s Foreign Policy for three reasons: a) India’s stance on its immediate neighbourhood/ South Asia has been marked by tentativeness, which is set to change with continued focus under PM Modi. b) BIMSTEC members include Bangladesh, Bhutan, India, Myanmar, Nepal, Sri Lanka and Thailand which geographically and geopolitically compliment India’s Look/Act East Policy. c) China’s mammoth Belt and Road Initiative and the Maritime Silk Road Initiative (MSRI) can be gradually countered through such steps of creating close multilateral partnerships.

The SAARC as a regional organization has regularly faced troubles in becoming a functional organization, owing to differences between India and Pakistan, its largest and most influential members which are also neighbours. To overcome this state dismal state of affairs and to avoid a situation where India’s regional ambitions become hostage to Pakistan’s nefarious designs, perhaps, a focus on BIMSTEC could be a sound strategic move.

On the one hand, India can afford to ignore Pakistan in the region and on the other, keep continuously isolating it elsewhere in the international fora on the issue of terrorism. A sustained strong willed stance on Pakistan combined with astute diplomacy can provide India with a definitive direction to its policy in the South Asian region.

The BIMSTEC has an eastward component for India. For the last 15 years and more New Delhi has indicated a shift towards the east in its foreign policy orientation, initially calling it the Look East Policy and during Modi’s first term as the Act East Policy. The BIMSTEC invitations include the geographic gateway states (Myanmar and Thailand) to South East Asia.

The long-standing cultural links with the Southeast Asian countries only enhance the strategic validity of such overtures to Myanmar and Thailand. These linkages help India’s domestic policies towards India’s Northeast as a major component of BIMSTEC is the connectivity network it is supposed to create to link the member countries. Thus, the BIMSTEC could work as an initial major step towards operationalization of the Act East policy.

Moreover, the strategic relevance of the BIMSTEC cannot be underestimated vis-à-vis the Belt and Road Initiative of China. Though the scale, scope and coverage of the BIMSTEC is smaller than that of the BRI and the MSRI, India can only match the Chinese financial capacity through investments in such ventures. In the long run, it may prove to be more effective than even the BRI and the MSRI in which projects have already faced difficulties and the Chinese intentions have come under scrutiny with allegations of ‘debt trap diplomacy’.

Myanmar, Bangladesh, Sri Lanka and Nepal which border India, through land or water are participating in the BRI and MSRI by allowing the Chinese to create transport infrastructure and availing hefty loans. As mentioned above, creation of a transport network, a vital aspect of the BIMSTEC can serve the important purpose of providing connectivity and cohesion in the South Asian region as well as benefit the Indian economy.

Therefore, the benefits of such gestures of inviting the BIMSTEC heads of state are many fold both for India and its neighbourhood.  This also makes geopolitical sense as majority of scholars in geostrategy have advocated for consolidation of a regional power’s position in its immediate vicinity before embarking on projection of power at a larger geographical scale say the continental scale or in the case of India, the Indian Ocean Region, which is a huge expanse.

The author earlier in the same column had indicated that ignoring the rogue neighbour’s negative work in the region and moving forward with a positive intent should be New Delhi’s approach. Invitation to BIMSTEC, outlines Modi government’s strategy of ignoring the western neighbour and proceeding ahead with a cooperative and developmental attitude in the South Asian region. It is with only such an attitude and approaches that China’s forays in the region can be overcome and path for a peaceful South Asian region can be forged.