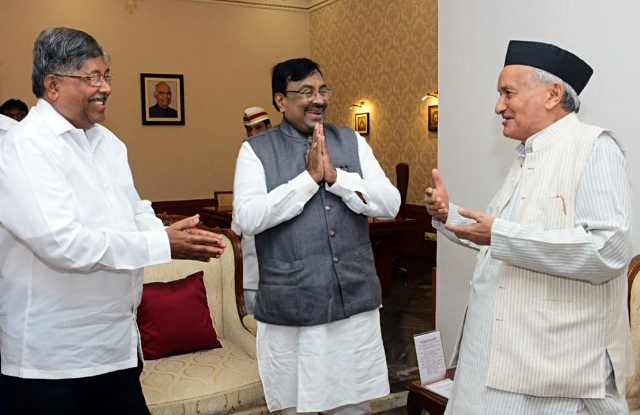 Amidst the impasse between BJP and Shiv Sena over the formation of government in Maharashtra, a delegation led by state BJP President, Chandrakant Patil met with Governor Bhagat Singh Koshyari on Thursday and discussed political situation of the state.

“People of Maharashtra have given the mandate to ‘Mahayuti’ (alliance). There is a delay in government formation. Today, we met the Governor to discuss the legal options and political situation in the state,” said Patil while addressing a press conference after meeting Governor.

The BJP and Shiv Sena, who are partners in the ruling alliance in Maharashtra, had fought the assembly polls together. While the BJP emerged as the single largest party in the recently held elections, it is yet to stake a claim for government formation.

Even after getting the required numbers to form the government, there has been a delay in cobbling up a coalition as Shiv Sena has insisted that the two parties had a ’50-50′ power-sharing agreement before the elections.

On the other hand, Maharashtra Chief Minister Devendra Fadnavis has said that Shiv Sena was not promised the chief ministerial post for two-and-a-half years when the alliance was sealed before the 2019 Lok Sabha polls.