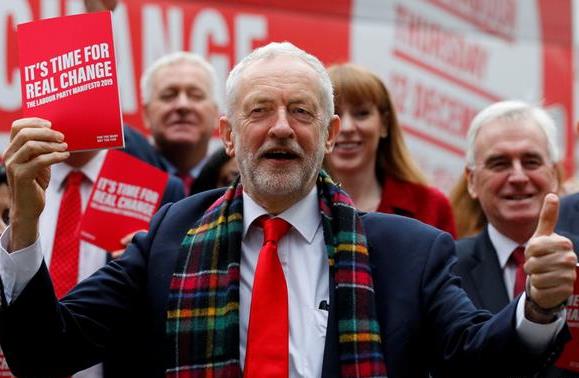 Britain On Verge Of A Revolution

Whichever way the forthcoming election in United Kingdom goes, Britain is going to change fundamentally and so might quite a few countries around the world. Even possibly India. Brexit is now a sideshow. One way or the other it will be decided after the election. The real choice before Britain is between reviving a hard socialist future or revival of an extreme right wing capitalist economy. The British election is important because what happens in UK may start to become a trend elsewhere. Besides its fading power and its slide in the economic hierarchy, Britain still influences the intellectual political discourse in the world.

Jeremy Corbyn’s call for a socialist revolution is in the Labour manifesto and for all to see. It is open to criticism, to critique and to support. Voters know exactly what they will get whether they vote to stay in Europe or come out. Boris Johnson’s Conservative manifesto on the other hand is a hall of mirrors giving away little but bouncing a number of reflections without revealing where reality lies. Behind this is suspected to be a lurch towards American capitalist model, even more than Thatcherism

Corbyn’s socialist dream is coming under tremendous media attack. Apart from the tax threat being felt by millionaires and billionaires, many media people also fear their take home pay will be down since their earnings are a lot higher than the £80000 threshold at which high taxation will come in.

Ever since Thatcher started the low taxation drive in UK reaching a current low corporation tax of around 20% and maximum 45% income tax for millionaires, capitalism has dominated economic policies not only in United Kingdom but most of the world. Before the Thatcher revolution, taxation had gone up to 83% in 1974 for high earners and 45% for corporations in UK.  In India, highest tax rates were an eye watering 97.5% at one time (1973) but remained around 85% for a long time.

Corbyn is attempting a sort of root and branch overhaul of Thatcherism. Higher taxation to pay for more social welfare, better NHS and elderly care have become part of the public debate. Corbyn’s Labour is promising to reverse another Thatcherite policy that started a trend around the world, of privatisation of public utilities. Labour will renationalize the Railways, water and even start a State provided free fast internet service.

Privatisation of public utilities and other major State services  became the economic model of late twentieth century around the world. Even India adopted it under Dr Manmohan Singh’s stewardship of economic policy. If Labour wins, it will be interesting if Thatcherism will begin to be dismantled in other parts of the world as Labour’s main message is ‘Austerity does not work, Privatisation does not work’.

On the other hand if Conservatives win with Boris at the helm, most pundits predict that Britain will swing even further to the right than it is at the moment. This will begin the Americanisation of Britain’s public policy and economy.

Any remaining public utilities and services will probably see further private ownership and left to the market to determine their success or failure. The two big areas that are likely to see significant departure from the past will be the National Health Service (NHS), a flag ship of Britain’s soft power around the world and a pride of Britain’s socialist history. The second will be the standards on agriculture produce and food. Currently Britain has very high standards imposed by its membership of the European Union. After Brexit, a Boris Britain is likely to seek greater trade with United States, which in turn is asking waiving of these standards.

It is the further privatization of the NHS which is worrying a lot of people. Boris Johnson has made promises that the NHS will not only be safe under him but will get further cash. However the majority of British people do not trust him. He has gained a reputation for being a politician who rarely keeps his word. Yet Boris Johnson’s remarkable feat is that he has continued to mesmerize the same public that does not trust any of his promises to be kept!

The Trump administration has already had meetings with the Johnson Government on letting American Health giants to gain ownership of NHS sectors. Further the Drug companies in USA will also likely be given freedom to increase charges for medicines sold by them. The NHS is an institution that continues to attract awe around the world for its free from cradle to grave free health care. There are serious attempts in India to attract NHS expertise to introduce similar models. However many fear that under Boris Johnson government, the NHS will start to crumble, a loss to Britain and to the world.

Social welfare will most likely be further cut. Many elderly and poor people will suffer even more. An environment similar to USA is being prophesised by many a political commentator. This means people hungry on the streets, increase in poverty and poor health. The rich are likely to become richer.

Britain under conservatives will become a land with little of its manufacturing or financial sector in indigenous ownership. Many of current British manufacturing is owned by international companies, including from China. This is likely to increase. Britain will effectively be owned by the non British, oligarchs and State enterprises from countries such as china, France and Germany even more than currently. It is likely to become the world’s market State. At one time Britain only had market towns, now the entire country could become a market hub.

The third major party in Britain is the Lib Dems. Their single agenda seems to be to reverse Brexit.  If they become the King makers, they will insist on a referendum which in turn may put an end to Brexit Britain with UK remaining in Europe. A number of opinion polls predict that another referendum will produce a majority in favour of remaining in EU.

Whether Labour forms the next Government or Conservatives do, the most likely tectonic shift after this elections will be unravelling of Great Britain or United Kingdom. The Scottish National party (SNP) is widely predicted to win in Scotland. SNP will insist on another Scottish referendum. Again polls predict that this time Scotland will vote to leave the Union, first formed in 1707, having been treated as an irrelevancy in the Brexit talks with Europe. This has angered a number of the Scottish.

The other land likely to drift away from United Kingdom is Northern Ireland. In a Boris Brexit Britain, the Northern Irish are likely to call for a referendum of their own. Boris Johnson has negotiated a deal with EU that requires a border between Norther Ireland (a British territory) and the rest of Britain to avoid goods being smuggled into Europe through Republic of Ireland (Southern Ireland). Polls are showing that a majority of Northern Irish feel betrayed by Conservatives and see no reason not to join Southern Ireland and become one country.

The 2019 election, called in a hurry, will not be insignificant. Instead it will have profound ramifications, changing the history, politics and economics of United Kingdom and to some extent rest of the world. Britain will have a revolution of either the left or the right which will influence public policies around the world. And regardless of which side it starts sailing, Britain is likely to start breaking up, bringing an end to the once mighty British Empire. Finally 300 years of British Empire will shrink back to start, into a small territorial land called England with Wales attached for a while.

brilliant article as always. Boris Johnson’s politics is lie ,lie and lie. the British public know this and the tory supporters also know this but in the case of tory supporters country comes second and party first (selfish b……s) whoever wins it will be disaster for the climate crisis !! after annexation of Punjab and conversion success of Sikhs by the Christians, they said by 1900 Sikhs will only be found in Museums. Sant Attar Singh initiated 1.4 m Sikhs and declared that it is clear all to see the Sikhs thriving and also that the British say that Sun… Read more »

Frankly, I never like to use the “label” left or right. My hearts in the middle but considering that left means more social justice and fairness, my wish is that this new un United Kingdom sail left at full speed ahead. If it goes right, if it wasn’t for its people that I love…I would hope it sinks. These are my honest feelings because the author of this article is unfortunately right…..if the UK sails right many more in the rest of the world will suffer. I am sick and tired and confused on why the rest of the world… Read more »