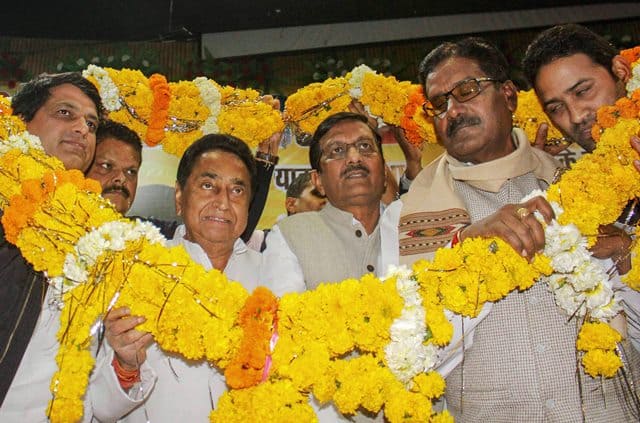 Can Kamal Nath Hold His Pack Together?

As Madhya Pradesh chief minister with a wafer thin majority in the Assembly, Kamal Nath has his task cut out for him – the looming threat to his government calls for his political management skills

The Kamal Nath government in Madhya Pradesh has got a temporary reprieve since Prime Minister Narendra Modi and his second-in-command Union home minister Amit Shah are currently preoccupied in tackling the Kashmir issue following their momentous decision to scrap Article 370 and bifurcate the state.

However, Kamal Nath cannot afford to be complacent or let down his guard as the Modi-Shah duo are known to strike when the enemy is least prepared for an attack. This was evident in the ongoing budget session of Parliament when opposition parties like the Congress, the Samajwadi Party and the Telugu Desam Party were caught napping when faced with a string of defections from their ranks in the Rajya Sabha.

After the Bharatiya Janata Party toppled the Congress-Janata Dal (S) government in Karnataka, it was expected that Madhya Pradesh would be its next target since the Kamal Nath government has a wafer-thin majority in the assembly. In fact, the BJP  let it be known publicly after its massive victory in the Lok Sabha polls that the Madhya Pradesh government would not last long.

But project Kamal appears to have been deferred for the time being. Besides the fact that the BJP’s central leadership has more pressing issues to tackle at present, the party has to first settle the leadership issue in its state unit.

It is an open secret that after 13 years in office, former chief minister Shivraj Singh Chouhan is itching to get back his old post but Modi and Shah have other plans for him. The two leaders have signaled that Chouhan’s innings in the state is over and  have deliberately denied him charge of the party’s state unit. They did not even  appoint him the leader of the legislature party in the assembly.

The BJP wants a new leader in Madhya Pradesh and there was talk that  Kailash Vijayvargiya, the party’s national general secretary in charge of West Bengal, would be Chouhan’s replacement  but his chances have dimmed after his son courted controversy by assaulting officials with a bat.  Finding an alternative is also proving to be problematic as Chouhan’s popularity has not taken a hit even after he lost the government. He remains the BJP’s top mass leader in Madhya Pradesh.

However, the BJP will move in for the kill at an opportune moment when it stands to gain politically from Kamal Nath’s ouster. Having promised justice to the victims of  the1984 anti-Sikh riots, the BJP would like to stack up sufficient material against Kamal Nath for his role in stoking violence in Delhi following Indira Gandhi’s assassination. The Congress leader was indicted by the Nanavati Commission for his role in the riots but no action could be taken against him for lack of evidence. Nevertheless, this issue comes back to haunt Kamal Nath periodically. His appointment as Madhya Pradesh chief minister met with strong protests from the Sikh community. Though these protests died down, the BJP has a powerful weapon in its armoury to dethrone the Congress chief minister.

Kamal Nath has his task cut out for him. The looming threat to his government calls for his legendary political management skills. He recently provided a glimpse of what he is capable of when Kamal Nath managed to persuade two BJP legislators to vote in favour of a government Bill. The tables have turned as it is the Congress which is now openly declaring that several more BJP MLAs could switch sides in the coming days. Having been caught off-guard, the BJP’s state unit is rattled by this development. It is eagerly waiting for word from the central leadership to proceed with replicating the Karnataka model in Madhya Pradesh but it has not got the go-ahead so far.

During his long stint in politics, the nine-term MP from Chhindwara has held several portfolios at the Centre, ranging from environment to commerce. Kamal Nath has earned the reputation of being an able administrator with a quick grasp of contentious policy issues and has fought well for the country both at the 1992 Earth Summit in Rio de Janeiro and during the WTO negotiations. While jet setting across the globe, he never lost sight of his constituency, setting up a well-oiled establishment to deal with the grievances of the local people.

But unlike his predecessor Chouhan who was constantly on the move, meeting and connecting with the people, Kamal Nath confines himself to his office as he deals with files and policy decisions. Not just the public but his own party workers have complained about his inaccessibility. The Congress is hoping that as chief minister, he will compensate for his lack of people’s skills by delivering on governance. The fact that Kamal Nath has a wide network of friends in the corporate sector, the party believes, could prove to be a plus point as it could help in attracting investments to the state.

Like senior Congress leader Digvijaya Singh, Kamal Nath does not believe in antagonizing his political rivals but tends to reaching out to them. Shortly after the Lok Sabha results were declared, Kamal Nath lost no time in calling on the Prime Minister, ostensibly to introduce his son who has replaced him as Chhindwara MP. Only time will tell if this visit will help in saving his government from a predatory BJP.