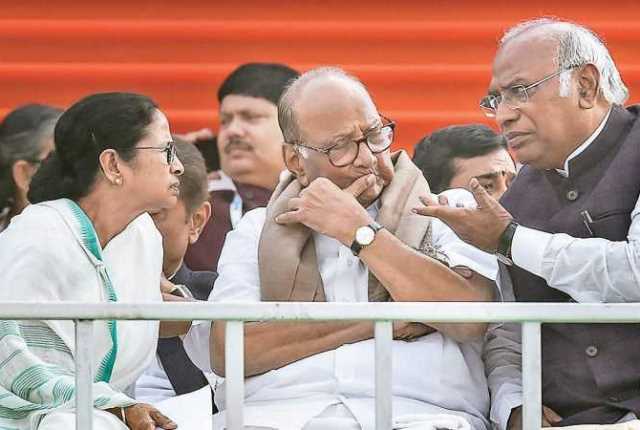 The results of the Maharashtra and Haryana assembly elections have revived the demand in the Congress for the merger of its various offshoots with the grand old party.

The proposal for the coming together of the Congress parivaar was made some years ago by former Madhya Pradesh chief minister Digvijaya Singh when the various constituents of the erstwhile Janata Dal – the Rashtriya Janata Dal and the Janata Dal (U) – decided to bury their differences and fight the Bharatiya Janata Party unitedly.

Though the members of the Janata Parivaar parted company after a brief honeymoon, a large number of Congress leaders believe that parties like the Nationalist Congress Party, the Trinamool Congress, and the YSR Congress, which emerged from the parent party, should come together if they are serious about battling their common political rival – the BJP.

This suggestion has been revived in the party after the latest round of assembly polls, especially in Maharashtra. There is a growing view that the Congress and the Sharad Pawar-led Nationalist Congress Party need each other. The NCP won 54 seats in this election while the Congress tally stood at 44. Though the two parties had a pre-poll alliance, it is agreed that the result could have been far better if the Congress and the NCP contested as a single entity.

This issue of the merger was first mooted in the wake of the BJP’s phenomenal growth across the country which has threatened the survival of the various regional parties along with the Congress. Singh and many other others in the Congress have been of the consistent view that political parties that are on the same page ideologically should come together to fight communal forces.

“Unlike the Congress and the BJP, there are no ideological differences between our party and those born out of the Congress. These parties emerged essentially because of personal differences. So it should not be difficult for us to work together,” remarked a senior Congress leader.

NCP chief Sharad Pawar had walked out of the Congress along with colleagues PA.Sangma and Tariq Anwar as they had strong reservations about Sonia Gandhi’s foreign origins. Mamata Banerjee parted company with the Congress because she was convinced that the party was not serious about fighting the Left parties in West Bengal. In Jaganmohan Reddy severed his ties with the Congress when he was denied the chief minister’s post in Andhra Pradesh after his father Y.S Rajasekhara Reddy was killed in an air crash.

The desperation in the Congress is understandable. The party is a pale shadow of its old self today, having been mauled in two consecutive Lok Sabha elections. In addition, it has lost a string of assembly elections over the past five years, reducing the party’s presence to a few states.

Furthermore, its continuing downward slide has plunged the Congress into a serious leadership crisis, especially after Rahul Gandhi refused to continue as party chief and Sonia Gandhi had to be persuaded to take over from him. However, her return has not put an end to the uncertainty in the party as her second stint is being viewed as a holding operation.

In addition, the Congress is sorely lacking effective and credible regional satraps as proved by the latest round of assembly polls. The Congress fared poorly in Maharashtra because it was not led by a strong state leader while it doubled its tally in Haryana  (from 15 to 31) after former chief minister and a leading Jat leader Bhupinder Singh Hooda  was given charge of the poll campaign, tantamount to an informal  projection as the party’s chief ministerial candidate.

In Maharashtra, the opposition charge was led by an aging and ailing Pawar who proved that he still has a lot of fight in him and has the capacity to challenge the BJP.  Over the years, the Congress has made several overtures to Pawar suggesting that the two parties go in for a formal merger since Sonia Gandhi’s foreign origins in no longer a point of difference between them as she is not a Prime Ministerial candidate. In fact, since then, the two parties have come together and run a coalition government in Maharashtra for three terms. Pawar was also a minister in the Congress-led United Progressive Alliance government. Pawar has, on several occasions, agreed to a merger only to back out later.

Not just Pawar but Mamata Banerjee and Jaganmohan Reddy have not been receptive to the Congress proposal in the past. Having established their identity as leaders in their own right and carved out their own political space in their respective states, these leaders are obviously wary of going back to the parent party as they would get lost in the Congress ocean. Moreover, they also had serious reservations about working under Rahul Gandhi’s leadership.

But it is also true that the political landscape has undergone a vast change over the past years. It is not the Congress alone whose existence is being threatened by a rampaging BJP but Pawar’s NCP and Banerjee’s Trinamool Congress are equally vulnerable. Jaganmohan Reddy, on the other hand, has no such fears as the BJP is not a strong presence in Andhra Pradesh and the battle here is between the Telugu Desam Party and the Reddy-led YSR Congress. Reddy is currently well ensconced after he won a credible victory in the last assembly election enabling him to form a government.

On the other hand, the BJP has emerged as the main political force in Maharashtra and also made deep inroads in West Bengal where it is occupying the main opposition space today. This has obviously rattled Banerjee who faces a tough assembly election next year. She could do with a helping hand to keep the BJP at bay. The Congress is hoping that the two leaders will be more amenable to its proposal since Rahul Gandhi is no longer a factor and the BJP remains a looming threat.