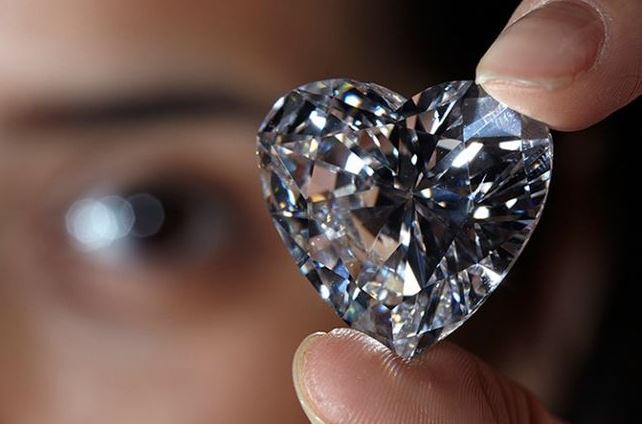 Love is supposed to be celebrated with diamonds. Each sparkling stone mined, cut and polished through a laborious and expensive process afterwards becomes a piece of jewellery. A ring or a necklace made of diamond will be for giving to one’s soulmate underpinning everlasting devotion and care. There is one thing about very high value luxuries of life whether it’s a Rolls-Royce Boat Tail or a Bugatti La Voiture Noire in automobile or a Chanel or a Hermes in handbags for women or a piece of diamond jewellery from Tiffany or Boodles, their demand is inflation proof.

Prices may never deter buying a piece of diamond jewellery, but during repeated lockdowns triggered by the Covid-19 pandemic, mining of the precious stone and all that follows before diamond encrusted jewelleries could adorn exclusive stores of Harry Winston and Cartier, there were disruptions in the supply chain where India figures prominently. Diamond is now increasingly coveted by the middle class.

Incidentally, India is the only Asian country with a diamond mining industry located in Madhya Pradesh (MP). However, production is modest with output peaking to 39,390 carats in 2017-18 and then falling to 28,530 carats in 2019-20. Production next year was exceptionally poor at 13,680 carats, thanks to pandemic related disruptions.

Not in what it extracts from MP mines, but in cutting and polishing of roughs and then exporting finished diamonds for use in jewelleries made all over the world, India has an overarching global presence. Confirming this, the world’s leading Hamburg based provider of data and statistics Statista says, of the ten diamonds used in jewelleries across the world as many as nine come from India, after cutting and processing. Now, the Russian invasion of Ukraine leading Western nations to deny banks in Russia to access the SWIFT international payment system has cast a pall of gloom in the humongous diamond processing and trade centre in Surat. The trade is the source of livelihood for nearly 1 million people from Gujarat and other states.

As it would happen, the Indian diamond industry has to contend with uncertainty of supply of uncut stones soon after it staged a remarkable recovery from disruptions caused in every aspect of trade, including large-scale migration of workers engaged in cutting and polishing work to their respective villages and towns, resulting from the pandemic. A spokesperson for the Gem & Jewellery Export Promotion Council says: “Figures till February show exports of cut and polished diamonds had touched $30 billion. March figures are being tallied. But we are hopeful that exports for 2021-22 were a record around $35 billion compared with $25.47 billion in 2020-21.”

For Indian diamond processing industry, Russia is of strategic importance. This is because much of the supplies of roughs come from the mines owned by partly government owned Alrosa, which incidentally has leadership status in the world diamond mining industry. Alrosa, which has a share of around 30 per cent of global diamond production, happens to be the single biggest source of India’s rough imports. The multi-billion dollar Russian enterprise also has mining interest in Africa. It has the world’s largest reserves of the precious stone. In Russia itself, Alrosa has a share of at least 90 per cent of mined roughs.

The Economic Times says: “While India directly imports only around 10 per cent of Alrosa’s total rough diamond output, most Russian diamonds nevertheless end up here for cutting and polishing through trading centres.” Alrosa annual production of roughs is in excess of 30 million carats. But why does the world has a distinct preference for diamonds occurring in Russia and also why do Indian craftsmen want to work with such stones?

The answer to that is threefold: First, Russian roughs have a high proportion of regularly shaped crystals. This gives an advantage to diamantaires to create “ideally proportioned polished stones.” Second, Russian roughs score high on colour count. Alrosa makes an emphatic claim that the roughs it extracts offer the possibility making “exceptionally white diamonds” that will be difficult to match from stones from any other source. Third, the company takes unabashed pride in saying that diamonds mined in Russia have such “unique morphological characteristics” that their processing will cut cost and time. Moreover, every Alrosa diamond carries a unique certificate after undergoing thorough gemmological examination.

Diamond processors in Surat with a large army of highly trained artisans have an abiding trade relationship with Alrosa with payments in hard currency in millions going through seamlessly till Russian banks were denied access to the SWIFT facility. A further two-stage bite in normal trade with Alrosa came when the US President Joe Biden in his attempt to economically punish Russia first sanctioned Alrosa and its oligarch CEO Sergei Ivanov and then banned imports of diamonds, Vodka and seafood from the country invading Ukraine.

Biden’s first move was not greatly upsetting for the global diamond trade. This was because Alrosa sanction amounted to prohibiting debt and equity transactions. Therefore, it was still entirely legal for US companies to buy and sell diamonds mined in Russia. But the scene changed completely once import ban came. There is the call from non-profit trade association Jewelers of America that its members should “stop buying or selling diamonds, precious metals and/or precious gemstones of Russian or Belorussian origin because of serious ethical, reputational and legal risks.”

Fearing domino effect of US moves on Western allies, Indian diamantaires are keeping their fingers crossed that Russia-Ukraine war will not be a long-drawn one allowing free trade in diamond restored as early as possible. For transaction convenience, they also want Russia once again finding access to SWIFT. “If the West remains lukewarm to Russia origin diamond, then there will be an inevitable squeeze on trade, for that country has such a big share of world production. In consequence, our business, which is largely dependent on processing roughs from Russia will take a knock.

Mercifully, this has not happened as yet since we had fairly good stocks when the war started,” says a diamantaire who doesn’t want to be named. In the meantime, the Surat based trade feels a great sigh of relief as supplies from Alrosa have resumed aided by success of importers here to make payments for rough purchases through German banks. Surat sentiment has been buoyed by the recent Delhi visit by Russian foreign minister Sergey Lavrov, specially his meeting with Prime Minister Narendra Modi. India has historically deep political and economic relationship with Russia. In keeping with that there are reassurances from Alrosa of uninterrupted supplies of roughs to Indian buyers. In fact, orders for roughs placed in March are now arriving in India with payments in hard currencies made through different banking channels. Perhaps soon diamond roughs will be part of Rupee-Rouble trade.