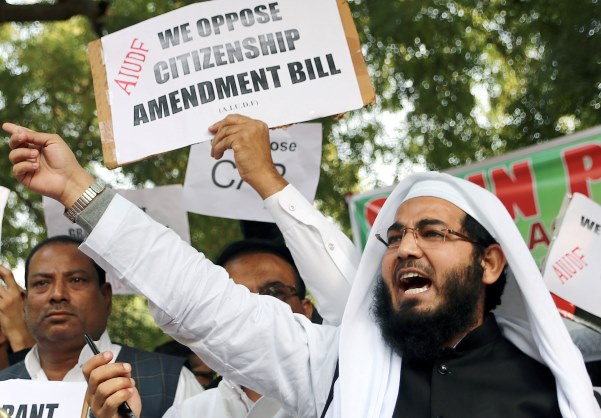 Amit Shah’s “termites” are back, along with miscellaneous cockroaches, pests, insects and vermin. They have to be profiled, isolated, ghettoized, imprisoned in detention centres or concentration camps, and, finally, deported or thrown out of the country. That in his fertile imagination “termites” only stand for ‘Muslims’, the Muslims who live in India, and that they can’t even live here as ‘second class citizens’, only reflects the big picture: the RSS dream sequence and cathartic fantasy of the ‘Hindu Rastra’, like the Jewish State of Israel, or the White Supremacist dream of the Ku Klux Klan (KKK).

This perverse irony only reminds of what the Serbs did to the Muslims in Bosnia etc., in the recent past, the Hindutva fanatics did to innocent Muslim men and women in Gujarat 2002 as a state-sponsored experiment, Congress politicians in Delhi did to Sikh men and women in the winter of Delhi 1984 after the assassination of Indira Gandhi by her own bodyguards, and what Pakistani army officers and soldiers did to Bengali women en masse in Bangladesh in 1971. Also, what Adolf Hitler did to the six million Jews in Germany, Poland and the rest of Europe during the Holocaust, while the world played blind, deaf and dumb.

It is indeed double irony that the extremist, ultra orthodox and fanatic Rightwing in Israel led by a discredited Benjamin Netanyahu considers the prime minister of India a close buddy, in the same manner that he considers Donald Trump and Boris Johnson as ideological bum chums. Surely, Netanyahu and his ultras would know that the RSS backed Hitler during the mass murder of Jews in Germany and Europe. Also, his infinite hatred for the Palestinian Muslims it is which unites him with his dear white supremacist friends in the contentious international stage.

Maps change in history. Migrations are ritualistic and compulsive driven by adventure, greed, shelter, economy, social ostracision, genocides and wars. Germany has magnanimously accepted one million refugees from Syria. Similarly, India accepted with a generous heart tens of thousands of Bangladeshi refugees and backed the liberation struggle out there against the Pakistani dictatorship. There was an added five paisa tax on every postcard and inland letter, called the refugee tax, and no one grumbled. People in Bengal and Assam opened their doors and their hearts for the exiled people of Bangadesh,  once part of  the amorphous geographical unity of the subcontinent, emotionally, culturally and socially aligned in terms of food, cuisine, literature, music, and cinema.

So much so, a severe, highly infectious and painful eye inflammation became an epidemic in West Bengal, with red swollen eyes constantly watering. In a spoofy twist, Bengalis called it ‘Joi Bangla’ even as a painful eye drop called ‘Locula’ broke the demand-supply cycle the chemists’ shops. No one really felt bad; couples with red eyes happily married each other unafraid of spreading infection, and both solidarity and bonhomie flourished between the ‘outsiders’ and Indians across the border. No one then thought that they were dealing with “termites”, pests, cockroaches and vermin, unlike  a belligerent Amit Shah these days.

Amit Shah might not be really aware that both the national anthems of India and Bangladesh has been written by Noble laureate Rabindranath Tagore, an icon on both sides of  river Padma; that Kazi Nazrul Islam, an iconic revolutionary poet is as popular across the porous borders, like Lallan Fakir, a Bangladeshi, the original source of great Baul songs and poetry.

Surely, Shah would not agree with an internationalist like Tagore’s sharp views on nationalism. Tagore e called it “carnivorous and cannibalistic’. Indeed, Tagore was united with the most refined minds, both male and female, across various maps and beyond borders, and he never chose to ghettoise romantic or human love within the trappings or mappings of nationalism. Indeed, he travelled all the way to Princeton to meet Einstein.  Wrote Tagore in a letter to his friend AM Bose in 1908: “Patriotism can’t be our final spiritual shelter. I will not buy glass for the price of diamonds and I will never allow patriotism to triumph over humanity as long as I live.”

On Monday, December 9, 2019, Amit Shah and his party has tabled a bill in the Lok Sabha which will turn the entire pluralist history of post-Independence secular India decisively upside down. It violates the essence of the Indian Constitution drafted by Bahasaheb Ambedkar and endorsed by the stalwarts of the freedom movement in which the RSS did not participate. It violates the basic premise of Article 14 of the Indian Constitution which declares all citizens equal outside caste, sex, creed, religion or status. “Equality before law” is perhaps the most crucial feature of the Indian Constitution. As stated in the famous Keshavananda Bharti case in the Supreme Court, the basic structure of the Indian Constitution just cannot be changed, not even in Parliament by a brute majority. Clearly, Amit Shah and Narendra Modi are aware that this contentious bill can be struck down in the apex court. However, their essential purpose is different and diabolical: to create social and political polarisation and consolidate their sinister “termite” politics of hate, targeting one community of Indian citizens.

Clearly, post the abolition of Article 370 in Kashmir, and putting 8 million Kashmir Muslims under siege and military occupation after August 5, 2019, the Citizenship Amendment Bill (CAB) and National Register of Citizens (NRC) are the two vicious trumpcards for their next election campaign in 2024 –the Indian economy having totally failed with mass joblessness and the crashing of GDP. Even government data has shown that Swach Bharat is a lot of propaganda and hype, as is Skill India, Start-up India, Digital India etc. Indeed, even women are being raped and burnt alive as a public spectacle in an India where the “good days” have only arrived with a sinister brand of organised hate, polarisation and communal politics disguised as nationalism.

Amit Shah’s termite campaign as much as the NRC has boomeranged. Predictably, the CAB too would fall into the anti-catharsis of a Catch-22  situation. Here is why:

The latest NRC results after spending a few thousand crores shows 19 lakh non-citizens. A large chunk of them constitute Hindus, Bengali Hindus, Gorkhas, Boros, indigenous communities and tribals. So will these “termites” be crushed, deported and jailed? Ironically, the BJP is now opposing NRC in Assam with the cut-off date fixed on August 24, 1971, as per the Assam Accord signed between Rajiv Gandhi and the All Assam Students Union (AASU).

Amit Shah tried to sell the NRC card in West Bengal in the recent bye-elections, targeting the Bengalis who have come to Bengal after 1971 from Bangladesh. The BJP lost all the three elections and there is a virtual divide within the state unit with a section of the BJP leadership saying that the NRC communal polarisation will just not work in West Bengal.

The entire North-east is united in its opposition to CAB, despite the opportunistic amendments in the tribal areas. BJP’s ally, Asom Gono Parishad (AGP) and AASU are vehemently opposed to it. Like in the recent past, there are daily bandhs and mass protests in Assam and its neighbourhood called by several united fronts and civil society groups. Even Arunachal Pradesh, Megahalaya and Manipur are fully against CAB, as is the united front of the North East Students Association.

Amit Shah is playing with fire. It is a simmering volcano with which he is playing a dangerous game. It might flare up, and the cost in terms of social division and possible violence and strife will be infinite.