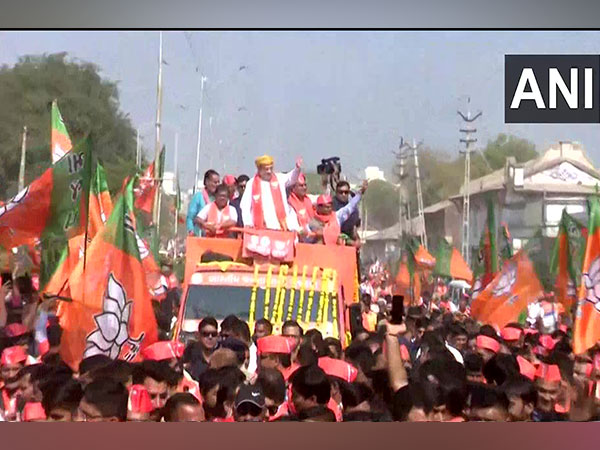 Reacting to Congress’ “Ravan” remark against Prime Minister Narendra Modi, Union Home Minister Amit Shah on Thursday said that the people of Gujarat have always given a reply to Congress through the ballot box whenever they have used inappropriate words against PM Modi.

While holding a roadshow in Sanand in Ahmedabad, the Home Minister told ANI, “Whenever Congress has used inappropriate words against PM Modi, then the people of Gujarat have given a reply through the ballot box. This time also the people of the state will give a reply.”
The Home Minister’s roadshow is being held when polling for the first phase in 89 of the 182 constituencies is underway in the state.

Scores of people joined the Home Minister in the roadshow.

Shah said that when Narendra Modi was Chief Minister of the State, he had solved several basic problems of the people.

“Under the tenure of Chief Minister Narendra Modi, various problems were solved in Gujarat. Gujarat used to face the problem of water scarcity, but a permanent solution was found by Narendra Modi by building check damns, bringing ‘Naramada Yojna’ and ‘Sujalam Sufalam Yojana. Electricity is being supplied for 24 hours and health services have been upgraded across the State. The enrollment and dropout issue in schools was solved. Efforts made by Narendra Modi in solving these basic problems of Gujarat is deeply appreciated by the people of Gujarat,” Shah told ANI

He said that the anti-radical cell is a proactive step adding that “If we control radicalisation, then terrorism and riots will be controlled”.

Notably, during a poll campaigning for the Party, Congress chief Mallikarjun Kharge at a rally in the Behrampura area of Ahmedabad described PM Modi as Ravana, wherein he said, “In all these campaigns, he (Modi) only talks about himself. ‘Don’t look at anyone else, just look at Modi and vote’… how many times do we have to see your face? How many forms do you have? Do you have 100 heads like Ravan?”

Notably, the second phase of the Gujarat Assembly election is on December 5.

According to the Bharatiya Janata Party (BJP), this mega show will cover more than 50 km starting from the Naroda Gam and ending at Gandhinagar South constituency.

This roadshow by the Prime Minister is expected to pass through 16 assembly constituencies that go into polls in the second phase of the Gujarat election on December 5. (ANI)