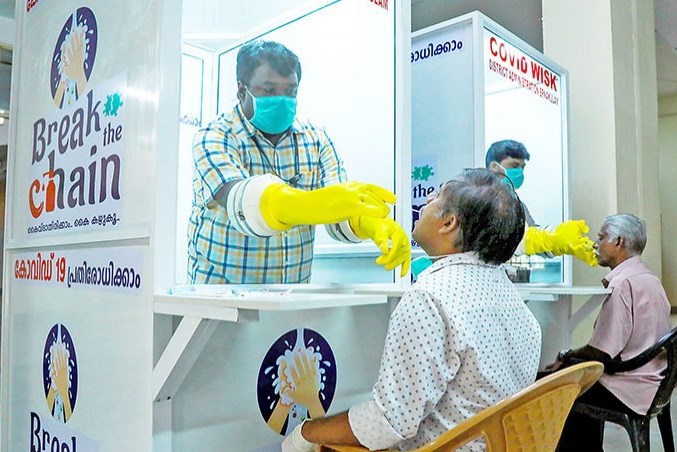 Covid-19 – What Rest of India May Learn From Kerala

Fighting an epidemic like Corona requires scientific temper, humanism and a spirit for inquiry and reform. I strictly follow scientists and experts than those who eulogise on the imagined benefits of cow dung and cow urine.
–KK Shailaja, Health Minister of Kerala

As early as late March this year, impossible things were happening in Kerala. An old couple, aged 93 and 88, were admitted to the Kottayam Medical College. Their son and his family, upon return from Italy during the last week of February, had infected the elderly.

Placed in the high-risk category by international standards, considering the high mortality rate of older people globally due to the pandemic, they were already inflicted with multiple ailments, typical of old age. The man had heart and breathing problems, which deteriorated into a heart attack in the hospital; he was put under a ventilator.

Indeed, when the entire health system in the country and world over had put their hands up on old patients, especially those above 60, the medical staff and doctors at the Kottayam Medical College successfully saved the lives of the husband and wife. Kerala Health Minister KK Shailaja ‘Teacher’ was directly in touch with the hospital staff, assuring total support of the government, and successfully implementing the policy of decentralized micro-management. Almost a month later, a warm farewell was given to the couple by the hospital staff as the two left for their destination to Pathanamthitta.

ALSO READ: How Covid-19 Will Change Our Lives

Indeed, India’s first three positive cases were reported from Kerala, in just about two days in early February this year. The three patients were discharged, totally cared, after 15 days.

Why Kerala has become a model state has many outstanding reasons of current and long-term achievements. For instance, the same health minister led from the front in 2018 and 2019, to combat the Nipah virus outbreak.

During the devastating floods in 2018 and 2019, the entire Kerala, the state, its citizens in the rest of India, and those working in the Gulf, pooled in resources even as the central government gave a pittance as relief. The state machinery worked from the grassroots onwards, one step forward and two steps back, and painstakingly managed to resurrect the ravaged landscape into a new and pulsating entity. Even secularism was strengthened when religious places opened their compounds for prayers, shelter and food for all concerned, even while the waters of the flood roared outside.

This is an era of the information, and we are so proud of the global village. That America is a democracy is proved every day when US President Donald Trump, who hates the hostile free press in his country, holds a press conference on the dot, and answers the most difficult questions. He does not always indulge in a monologue, like the rare ‘speeches’ of the president for life in China, Xi Jin Ping, of what is clearly a totalitarian advanced capitalist nation-state.

At home, Prime Minister Narendra Modi has not addressed a single press conference since May 2014. And in the current bleak scenario, both his home minister and health minister seem to be decisively missing.

Even an otherwise accessible ‘aam aadmi’ chief minister like Arvind Kejriwal, ground reporters crib, is refusing to answer questions, not even on Whatsapp or in a digital press meet. He diverts questions, and reportedly indulges in a one-way discourse, thereby consolidating what is a total information clampdown, on good or bad news, or what is in store for the people in Delhi and elsewhere.

Not so in Kerala. Chief Minister Pinarayi Vijayan has spoken to the media almost every day with regular updates, good and bad, about the state health scenario. Mostly, it is good news, and future projects. The state government, indeed, had agreed to ease local transport for workers, open book shops and restaurants, but the Union home ministry reportedly shot it down, for reasons only they know.

Indeed, it will be worthwhile to give credit to the low profile, hard-working, straight-talking, simple and stoic chemistry teacher-turned-politician called KK Shailaja ‘Teacher’.  A hands-on minister, she is at the frontlines with her resilient mantra of ‘science over superstition’ in the most highly literate state in India. In that sense, once can draw parallels the ‘woman of science’ – Germany’s Angela Merkel.

According to reports, as early as in the month of January, when the first ominous signs were emerging from distant Wuhan in China, the health minister noticed the ‘alarm calls’. Her first reaction was that there were students from Kerala out there, perhaps trapped. “I sat together with the health secretary and discussed what to do because we knew a lot of Malayalee medical students were in Wuhan. We had the experience of Nipah, whereby we could not identify the first patient before he transmitted it to four family members.”

Hence, emergency measures were taken from the beginning even as help was reached out to the students. The airports in the state were kept on high alert from the beginning; this reporter was stopped for enquiry at the Kochi airport in early March. What is the origin of your destination, I was asked. When told that it was Delhi, they let me pass, even as foreigners were quarantined in comfort.

In top international tourist destinations like at the Kovalam beach resort near Thiruvantharam, or at the bustling Fort Kochi with its exquisite sunsets, old churches, Chinese fishing nets and huge ships sailing into the horizon across the Arabian Sea, there was a heightened state of awareness about the epidemic. Social distancing was being practiced without any overt formality, and the foreigners were treated with utmost respect and friendliness, with the local administration going out of their way to make them comfortable. Indeed, most foreigners have reportedly chosen to stay back.

Kerala’s discharge rate is very high. The mortality rate too is low. Said Minister Shailja: “Coronavirus mortality rate in Kerala is below 0.5 per cent, but in the world it is more than 5 per cent. In some places, it is even more than 10 per cent. Most of the people who are in isolation in the hospitals are stable and very few are in critical stage. We are treating them with utmost care. The discharging or cure rate is also very high in Kerala because of our systematic work. We evaluate everything every day.”

Sources in Thrissur inform that the virus has been declared almost totally controlled in Thrissur, Kottayam and Idukki. This is no mean achievement when the entire world is reeling under the pandemic.

The latest is the robot, as in China. Now ‘Nightingale-19’, designed by young innovators with the solid backing of the health department, is being used to provide food and medicines at the health centres in Ancharakandi in Kannur district. This is also a first in a ‘model’ state, where atleast 4 lakh migrant workers, designated with dignity as ‘guest workers’, have been given rations for three months, comfortable shelters and health care and counseling. In that case, there was no crisis in Kerala, when it came to the ‘guest workers’. So much so, ‘Opposition’ MPs, Mohua Mitra and Shashi Tharoor, joined in to speak to the Bengali workers directly through video, in Bengali, asking them to feel comfortable and not to worry at all.

Indeed, this can only happen in Kerala.