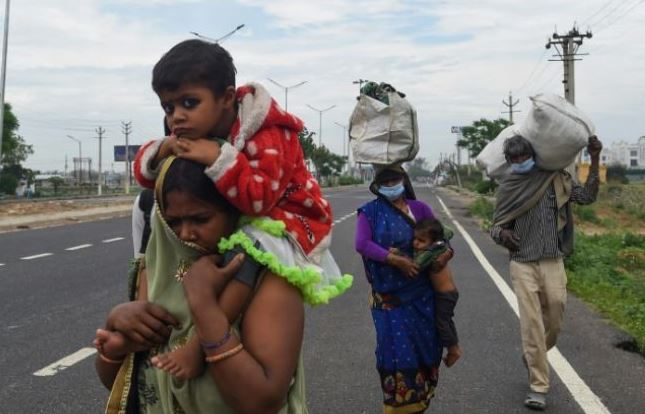 Stark poverty and hunger is stalking contemporary India but no one wants to see it or talk about it, especially the establishment and its economists. If statistics could tell stories of infinite sorrow, then nothing less than a mass tragedy, devastating, invisible and ghettoized, is currently stalking the inner lanes of an unhappy Indian landscape, and spreading with as much deathly intent as the deadly delta virus.

First, let us talk of the ‘missing women’. The unorganized sector, with practically no rights for workers, operated by cold-blooded sharks outside official labour laws, with not even job protection for fixed days, or fixed wages, shelter and crèches for children, no maternity and health benefits for women, no provident fund/gratuity/pension, or trade union rights, etc, constitutes more than 90% of the Indian workforce. Barring some states like Kerala, Delhi and West Bengal, workers in the unorganized sector largely don’t have fundamental rights. Half of them are women – and most of them are from the poorest communities – landless Dalits, adivasis, extremely backward castes, Muslims.

The fact is thousands of women seem to have disappeared from the work force since the pandemic. So where have all the women gone?

It’s a fact that majority of domestic helps, working in the gated societies, for instance, lost their meager income since March last year. Many of them were socially ostracized, unceremoniously sacked, not paid their wages, and banned from entering the gated societies. Many were compelled to ‘migrate’ back to their jobless small towns or villages with eternally stagnant economies.

Workers were told by their employers to leave the dingy tenements in urban ghettos, where 5 or more would share a room, because they could not pay the rent. Their children opted out of schools. Many women, and their kids, were seen ‘begging’ outside the posh markets in Noida, even as the rich filled their cars with goodies during the relaxation in curfew hours.

Many families have been starving, or eating one meal. All of them want to work and earn with dignity; others are afraid to stand in long, crowded food queues because of fear of the virus. For a long period those who did not have Aadhar or ration cards, had no clue how to get food from the public distribution system, even in a city like Delhi.

Consulting firm Dalbert, in a study conducted during March-October last year, reported that women have reduced their food intake because of less income, their rest hours have decreased and ‘unpaid care work hours’ have increased, at least a tenth of the women said that food is in very short supply and they are eating less, 16% had limited or no access to menstrual pads, while 33% of married women had no access to contraceptives as the pandemic disrupted public health outreach programmes. More than 43 per cent women were yet to recover their paid work. While it was terrible last year, the second surge devastated them. The study surveyed 15,000 women and 2,300 men from low-income households in 10 Indian cities.

“If the virus does not kill us, poverty will kill us,” said a balloon seller last winter in Noida. The invisible working class ghetto inhabited by Dalits and extremely backward caste people from Bengal, Bihar and UP, in Noida, surrounded by swanky highways and palatial houses, became jobless overnight on March 24, 2020. The street food vendor found no buyer, rickshaw-pullers no passengers, traffic light sellers no customers, even as thousands of construction workers were rendered jobless as the real estate industry crashed. Workers in the unorganized and small-scale industry, its back broken by demonetisation and GST, found a quagmire beneath their feet – rapidly sinking, and not a straw to hold on.

Stark poverty and hunger has been systematically turned invisible in India in the neo-liberal era, especially in the metros. Therefore, it was disconcerting for the cocooned affluent society when images of thousands of migrant workers suddenly emerged on highways, walking under a scorching sun. Pray, who are these condemned and exiled people?

With their worn out clothes, sacks and plastic bags, mothers holding their children, often barefoot, hungry and thirsty, with absolutely no relief from the central government, they were escaping the stark social/economic uncertainty after a lockdown was suddenly declared by the Centre. Among many enduring images of this Indian reality was the image of a dead mother at the Muzaffarpur Railway Station, her little child tugging at her sari. She was a migrant worker trying to go ‘home’ – from Ahmedabad to Bihar.

Delhi is classified as the most urban state (98%) in India. According to the Centre for Monitoring Indian Economy (CMIE), Delhi reported the lowest labour force participation rate (LFPR) for women during the pandemic. Female LFPR was as low as 5.5% compared to the male LFPR of 57. Unemployment among women was 47%, compared to 21 among men.

As many as 10 crore people reportedly lost their jobs during the nationwide April-May 2020 lockdown. While in the pre-election scenario in 2019, India marked the highest rate of unemployment in 45 years, a reality the Modi-led government tried to fudge, currently, it is estimated, approximately 140 million people are jobless, and this includes the corporate sector. The jobless figures are hazy; unemployment has shot up to 11.7 %, last year it was 8. Job losses have been higher in Maharashtra, Kerala, Tamil Nadu, Uttar Pradesh and Delhi, due to the impact of Covid.

A new Pew Research Center study states that consequent to the ‘deep recession’ in 2020, the middle class has shrunk by 32 million. This substantiates the speculation that millions of middle class households have been pushed into low income groups. The 32 million listed by Pew accounts for “60 per cent of the global retreat” in the number of people in the middle-income tier (defined here as people with incomes of $10-20 a day).

The number of people who are poor in India (with incomes of $2 or less a day) has increased by 75 million because of the COVID-19 recession. This factor also accounts for 60% of the global increase in poverty.

According to the Pew study, only 19% women remained employed and a high 47% suffered a permanent job loss, not returning to work even by the end of 2020. That is, almost half of the women workforce has effectively ‘disappeared’.

The study reported: “Prior to the pandemic, it was anticipated that 99 million people in India would belong in the global middle class in 2020. A year into the pandemic, this number is estimated to be 66 million, cut by a third. Meanwhile, the number of poor in India is projected to have reached 134 million, more than double the 59 million expected prior to the recession…”

Surely, there are millions of micro cases spread like unwritten stories of infinite inequality and economic/social discrimination across the remote rural terrain and in urban ghettos. They need to be documented, filmed, and written. The scale of this human tragedy could be epical.

Indeed, Mamata Banerjee made a cryptic point recently in Delhi: she said that it’s high time we have ‘sachche din’ in India –we already have had an overdose of ‘achche din’.

Yes. Millions have disappeared from the radar of just not the policymakers, but also from the consciousness of the rich, urbane classes. But, these invisible, people-the wome Dalits, Adivasis, daily wage labours, Muslims and farmers, now even dent the middle class, millions of whom have now become poor.
This state of affairs can’t continue much longer!

Necessary Functional Performance/Analytics Social
These cookies are essential in order to enable you to move around the website and use its features. Without these cookies basic services cannot be provided.
PHPSESSID
Cookie generated by applications based on the PHP language. This is a general purpose identifier used to maintain user session variables. It is normally a random generated number, how it is used can be specific to the site, but a good example is maintaining a logged-in status for a user between pages.
wordpress_test_cookie
Used on sites built with Wordpress. Tests whether or not the browser has cookies enabled
Technical Cookies
In order to use this website we use the following technically required cookies
These cookies allow the website to remember choices you make (such as your user name, language or the region you are in) and provide enhanced, more personal features. These cookies can also be used to remember changes you have made to text size, fonts and other parts of web pages that you can customize. They may also be used to provide services you have asked for such as watching a video or commenting on a blog. The information these cookies collect may be anonymized and they cannot track your browsing activity on other websites.
__cfduid
Cookie associated with sites using CloudFlare, used to speed up page load times. According to CloudFlare it is used to override any security restrictions based on the IP address the visitor is coming from. It does not contain any user identification information.
__cfruid
Cookie associated with sites using CloudFlare, used to identify trusted web traffic.
These cookies collect information about how visitors use a website, for instance which pages visitors go to most often, and if they get error messages from web pages. These cookies don’t collect information that identifies a visitor. All information these cookies collect is aggregated and therefore anonymous. It is only used to improve how a website works.
_gat_gtag_UA_2592650_1
This cookies is installed by Google Universal Analytics to throttle the request rate to limit the collection of data on high traffic sites.
_gat_gtag_UA_2592650_12
This cookies is installed by Google Universal Analytics to throttle the request rate to limit the collection of data on high traffic sites.
HotJar
_ga
This cookie name is associated with Google Universal Analytics - which is a significant update to Google's more commonly used analytics service. This cookie is used to distinguish unique users by assigning a randomly generated number as a client identifier. It is included in each page request in a site and used to calculate visitor, session and campaign data for the sites analytics reports. By default it is set to expire after 2 years, although this is customisable by website owners.
_gat
This cookie name is associated with Google Universal Analytics, according to documentation it is used to throttle the request rate - limiting the collection of data on high traffic sites. It expires after 10 minutes.
_gid
This cookie is installed by Google Analytics. The cookie is used to store information of how visitors use a website and helps in creating an analytics report of how the website is doing. The data collected including the number visitors, the source where they have come from, and the pages visited in an anonymous form.
These cookies are used by Youtube, Google, Twitter, and Facebook to deliver adverts that are relevant to you and your interests. They are also used to limit the number of times you see an advertisement as well as help measure the effectiveness of the advertising campaign.
Youtube
Twitter
Google
Weather.io
Remember you weather Location
__unam
This cookie is usually associated with the ShareThis social sharing widget placed in a site to enable sharing of content across various social networks. It counts clicks and shares of a page.
GPS
This cookie is set by Youtube and registers a unique ID for tracking users based on their geographical location.
Facebook
Decline all Services
Accept all Services
wpDiscuz
2
0
Would love your thoughts, please comment.x
()
x
| Reply