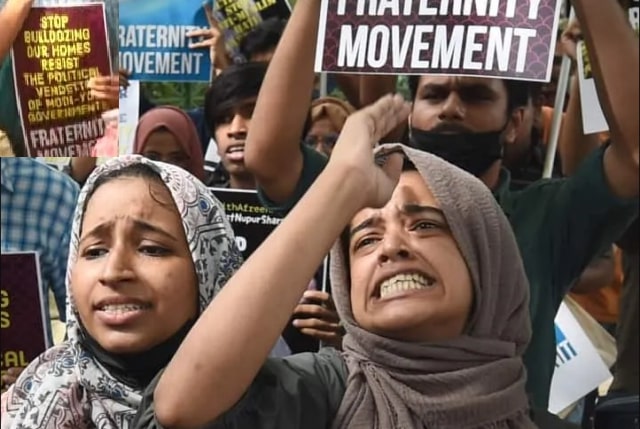 They demolished the Babri Masjid at Ayodhya. This was followed by bloody riots in many parts of the country: violence, bloodshed, deaths and dying, and a communal polarization after that infamous black day of demolition which ravaged the social psyche in the Hindi heartland.

Some of the most brilliant scholars, all young, most of them Muslims, are languishing in prison on cooked up charges. They have destroyed homes and shops of the poor in Jehangirpuri in Delhi, all legitimate and hardworking Indian citizens from Midnapur in West Bengal, and then in Saharanpur and Kanpur. Now, it is Allahabad.

They have willfully tried to usurp or destroy or sell out public institutions of the Indian democracy, you name it: media, education, health, the public sector, railways, airports, Bollywood. Even the private sector is allegedly compelled to toe the line. It is either them, or the damned highway in this heat.

So, what else will they choose to demolish and till which eternal end of eternity?

The house of Afreen. A former student of linguistics in AMU and JNU. A former member of the JNU Students Union. An articulate, independent, thinking young woman. So why do they hate young Muslim scholars so much, including the girls?

The home did not even belong to her father. It was reportedly a gift to her mother. Hence a policeman carries a portrait of a girl, in the ravaged circumstances, as if it is a bomb discovered in the ruins.

Posters, books, literature: so what else did they find in her house; what were they reading all this while; did they also find Harry Potter, Asterix, Mandrake and Vikram-Betaal, if not all the memories of Afreen’s childhood in that historic town near that holy river?

Not even a day’s notice was apparently given. The family was not at home to see their memories become rubble in moments. Earlier, Afreen told Al Jazeera, her mother and sister were detained for more than 30 hours. “The demolition is absolutely illegal because it is not even my father’s property. The house belongs to my mother… We have been paying our house tax for around 20 years and not once did we receive any intimation from the development authorities of Allahabad,” she said.

The point is if people protest peacefully, will their homes, most of them built with hard-earned money earned over decades of hard labour, be demolished with literally no notice and no process of justice at all? And since when has stone-pelting or clashes with police on the streets led to homes being destroyed?

Indeed, did they destroy the homes of the ABVP goons who attacked, viciously and violently, JNU students, right inside the campus? Did they go for a demolition drive when the woman president of this esteemed university had her head smashed, blood all over her face?

Or, when mob-lynchers, organized and armed, went on killing Muslims as a public spectacle in Jharkhand, Dadri and elsewhere? Or when open calls were made to goli maaro? When peaceful mothers and sisters of Shaheen Bagh were protesting against the communal and polarizing anti-constitutional bill called the CAA?

If an idea can make you ill, the demolishing apparatus seem to have been possessed with a certain sickness unprecedented in the history of post-Independence India. This sickness spells the language of impending doom, not a Hindu rashtra, which secular and pluralist India will never become. Certainly, not in this lifetime. And Afreen and her family stand as a symbol of this secular India.

“This is totally illegal. Even if you assume for a moment that the construction was illegal, which, by the way, is how crores of Indians live, it is impermissible that you demolish a house on a Sunday when the residents are in custody. It is not a technical issue but a question of law,” said former Allahabad High Court Chief Justice Gobind Mathur.

Earlier, in 2020, the chief justice had taken suo motu notice of the UP government’s move to name and shame activists who took up the cudgels against the CAA in Lucknow. The faces of the activists were splashed in public space in huge hoardings as if they were wanted criminals. The court held that this was against the principle of law and clearly violated their right to privacy.

Earlier, the Supreme Court had stopped the demolitions at Jehangirpuri in Delhi after the minorities were attacked on the occasion of a Hindu festival. Brinda Karat of the CPM and Ravi Rai of the CPI-ML (Liberation), along with activists, then led the resistance and stood before the bulldozers, thereby blocking the demolition of homes and shops of the poor residents, all legitimate residents of India staying there for years.

In an urgent letter petition to the Chief Justice of the Supreme Court several former judges and lawyers have made a fervent appeal seeking suo motu cognizance of the recent acts in UP: “…Pursuant to this, the UP police have arrested more than 300 persons and registered FIRs against protesting citizens. Videos of young men in police custody being beaten with lathis, houses of protestors being demolished without notice or any cause of action, and protestors from the minority Muslim community being chased and beaten by the police, are circulating on social media, shaking the conscience of the nation. Such a brutal clampdown by a ruling administration is an unacceptable subversion of the rule of law and a violation of the rights of citizens, and makes a mockery of the Constitution and fundamental rights guaranteed by the State. The coordinated manner in which the police and development authorities have acted lead to the clear conclusion that demolitions are a form of collective extra judicial punishment, attributable to a state policy which is illegal. The mettle of the judiciary is tested in such critical times. On many occasions, including in the recent past, the judiciary has faced such challenges and emerged with distinction as the custodian of the rights of the people… We hope and trust the Supreme Court will rise to the occasion and not let the citizens and the Constitution down at this critical juncture.”

Amidst the rubble, Afreen and her sister, mother and father, have stood like a rock. They peacefully protested against the CAA. Undoubtedly, they will peacefully protest against all forms of injustice and attacks on the secular contours and essence of the Indian democracy and the Constitution. Surely, the nation must stand with them in solidarity.

The nation is going through a situation that need highest care. Hope for good as despair may lead only to worst calamities. Calm oceans best fit for finest sail than rough oceans… 🙏