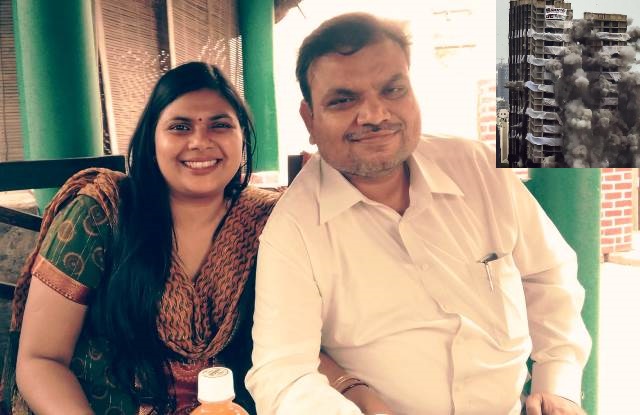 ‘Demolition of Noida Towers Created a Mela; Now Spare a Thought for its Homebuyers Too’

Ekta Gupta, 40, a homebuyer in the now-demolished Supertech Twin Towers, says she is yet to receive any compensation for her razed dream. Her story:

About 10 years ago, my husband and I spent our life savings to book a flat in Supertech Twin Towers. We were allotted an apartment on the 15th floor. As we wanted to see the development of the housing society where we had invested, we rented an apartment adjacent to the building site. The construction was in full swing and we were hopeful of attaining our house keys in good time. But destiny had other plans for us.

While I was drawing plans about the interiors of my house in my mind, a court case was filed by the residence of the Emerald Court against the Supertech Twin Towers. Even while the case was going on, the construction work never lost its momentum. We felt some mid-way solution will be reached in this legal conflict. Not for a second did it occur to us that our dream house will be razed to debris.

In fact, it was more heart-breaking when we watched the demolition of the high-rise Twin Towers from the same rented apartment which we had moved in to monitor the construction of our home. And despite the Supreme Court order, we haven’t yet received a penny as compensation.

To rub salt on our wounds, the bank has blacklisted our credit score. Forget about applying for a loan, we cannot deposit money in the bank as they will demand EMIs for the house which has been turned into a wreckage. We want to take loan to send our child for higher studies abroad, but it now seems impossible as we cannot qualify for any loan for having failed to pay the EMIs of our home loan. How can one pay an instalment for a heap of rubble?

I am happy that people who fought this long legal battle of 12 years got justice. But one man’s justice can be another man’s disaster. The residence of Emerald court and ATS Village will now get proper sunlight and air. But there are hundreds of home-buyers like us who have been left in the middle of nowhere. Our prospective home is demolished, no compensation has been paid and the bank is pressurising us to repay its loan.

There is hardly any authority which will hear the voice of a middle class homebuyer. Justice has been delivered, a spectacle has been live-streamed on TV channels, but the plight of Twin Tower investors has been conveniently ignored.

We live in a rented apartment, and are unsure if we will ever be able to move into a house of our own. But the dream is still alive. Our hopes have not died. Somebody in the system will realise one day the injustice meted out to people like us and try to set things in order.

What about booking holders.

This how the builders and banks are making the mockery of justice system and law of the land. We pray and Hope that You will get the justice soon.

I fully endorse your views

I am surprised why this family has not been given justice as per the Honourable Supreme Court order.

This issue is seen in all cities where builders are enjoying with the money from owners and bank.
Bank is enjoying by taking EMI and reducing credit score for that owner as owner might not be paying EMI due to several reasons.
Owners spend money from starting till end and in court as well. Builders does not follow court orders but simple man is afraid of bad credit score and banker coming for EMI and securing his.her respect in society.
WHERE IS THE JUSTICE ????

Necessary Functional Performance/Analytics Social
These cookies are essential in order to enable you to move around the website and use its features. Without these cookies basic services cannot be provided.
PHPSESSID
Cookie generated by applications based on the PHP language. This is a general purpose identifier used to maintain user session variables. It is normally a random generated number, how it is used can be specific to the site, but a good example is maintaining a logged-in status for a user between pages.
wordpress_test_cookie
Used on sites built with Wordpress. Tests whether or not the browser has cookies enabled
Technical Cookies
In order to use this website we use the following technically required cookies
These cookies allow the website to remember choices you make (such as your user name, language or the region you are in) and provide enhanced, more personal features. These cookies can also be used to remember changes you have made to text size, fonts and other parts of web pages that you can customize. They may also be used to provide services you have asked for such as watching a video or commenting on a blog. The information these cookies collect may be anonymized and they cannot track your browsing activity on other websites.
__cfduid
Cookie associated with sites using CloudFlare, used to speed up page load times. According to CloudFlare it is used to override any security restrictions based on the IP address the visitor is coming from. It does not contain any user identification information.
__cfruid
Cookie associated with sites using CloudFlare, used to identify trusted web traffic.
These cookies collect information about how visitors use a website, for instance which pages visitors go to most often, and if they get error messages from web pages. These cookies don’t collect information that identifies a visitor. All information these cookies collect is aggregated and therefore anonymous. It is only used to improve how a website works.
_gat_gtag_UA_2592650_1
This cookies is installed by Google Universal Analytics to throttle the request rate to limit the collection of data on high traffic sites.
_gat_gtag_UA_2592650_12
This cookies is installed by Google Universal Analytics to throttle the request rate to limit the collection of data on high traffic sites.
HotJar
_ga
This cookie name is associated with Google Universal Analytics - which is a significant update to Google's more commonly used analytics service. This cookie is used to distinguish unique users by assigning a randomly generated number as a client identifier. It is included in each page request in a site and used to calculate visitor, session and campaign data for the sites analytics reports. By default it is set to expire after 2 years, although this is customisable by website owners.
_gat
This cookie name is associated with Google Universal Analytics, according to documentation it is used to throttle the request rate - limiting the collection of data on high traffic sites. It expires after 10 minutes.
_gid
This cookie is installed by Google Analytics. The cookie is used to store information of how visitors use a website and helps in creating an analytics report of how the website is doing. The data collected including the number visitors, the source where they have come from, and the pages visited in an anonymous form.
These cookies are used by Youtube, Google, Twitter, and Facebook to deliver adverts that are relevant to you and your interests. They are also used to limit the number of times you see an advertisement as well as help measure the effectiveness of the advertising campaign.
Facebook
Youtube
Twitter
Google
__unam
This cookie is usually associated with the ShareThis social sharing widget placed in a site to enable sharing of content across various social networks. It counts clicks and shares of a page.
GPS
This cookie is set by Youtube and registers a unique ID for tracking users based on their geographical location.
Weather.io
Remember you weather Location
Decline all Services
Accept all Services
wpDiscuz
6
0
Would love your thoughts, please comment.x
()
x
| Reply