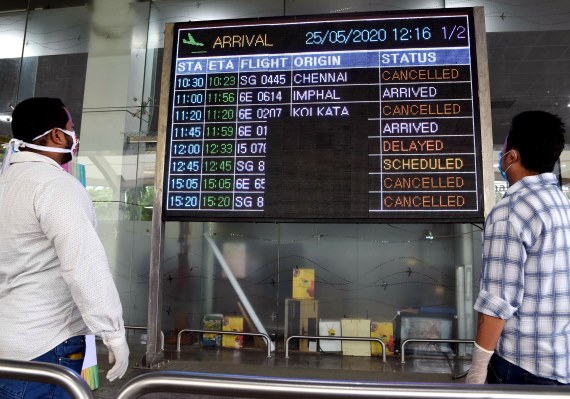 Although the central government has allowed the resumption of domestic flight from Monday, some of the passengers were left helpless at several airports as their tickets were cancelled due to other state governments not permitting the flights to land.

A long queue of passengers was spotted outside IGI Airport’s Terminal 3 on Monday as all domestic flights from the national capital are operating. However, as many as 80 flights at Delhi’s Indira Gandhi International airport have been cancelled today, officials said.

Domestic flight operations have resumed today across the country after two months of suspension except in Andhra Pradesh and West Bengal.

All scheduled commercial passenger flights were suspended in India following the Centre imposed lockdown to contain the spread of coronavirus.

The Airports Authority of India (AAI) on Thursday issued Standard Operating Procedures (SOPs) for airports as part of preparations for the recommencement of domestic commercial flight operations.

According to the SOPs, airports have been advised to ensure that passenger seating arrangement is done in such a manner so as to maintain social distancing among passengers by blocking those seats that are not to be used, with proper markers or tapes. All passengers also must compulsorily be registered with the Aarogya Setu app on their phones as per the directives.

Besides this, alternate check-in counters should be used to avoid congestion. The airport staff must be provided PPE kits, face masks etc, and they should also be provided with hand sanitisers.