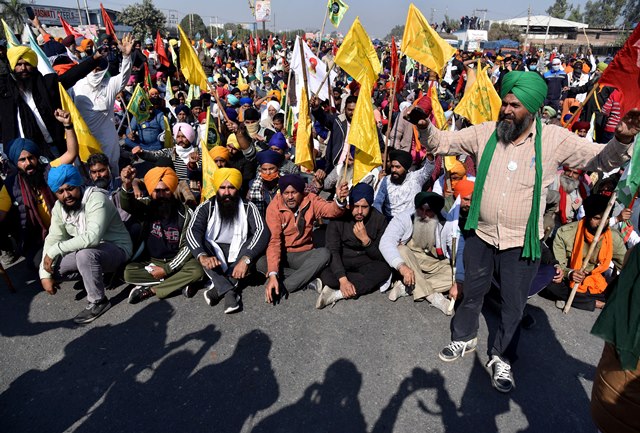 Delhi Police have made elaborate security arrangements as farmers decided to camp at the Singhu border (Delhi-Haryana) to protest Central farm laws.

“Situation is peaceful and under control. We are in contact with them (farmers). Our objective is to maintain law and order. We have deployed enough force,” said Surendra Yadav, Joint Commissioner of Police, Northern Range, Delhi.

Farmers are holding a peaceful protest at the Delhi-Singhu border on the occasion of 551st Prakash Parv of the first Sikh Guru.

Sukhvinder Singh Sabhran Punjab Kisan Sangarsh Committee Joint Secretary told ANI, “Today, we are sitting here on the day of Guru Parv and we will celebrate Guru Parv here. The central government is not ready to listen to us or there is no platform for discussion with them, we are not going to leave from here. There is enough food and we also want to thank the people of Delhi for the way they are supporting us.”

Joint CP Surender Yadav informed that all the farmers are peacefully protesting at the Singhu border.

“We are not facing any problem of any kind. We have enough force to deal with any situation in any way. We are also providing all kinds of facilities for the farmers here apart from medical facilities,” he added.

Meanwhile, security has been tightened and barricading was done at Ghazipur-Ghaziabad (Delhi-UP) border where farmers have gathered in protest farm laws.

Farmers have been protesting at various places in Delhi and Haryana and have rejected the central government’s offer to hold talks on December 3 saying that imposing conditions for starting a dialogue is an insult to them.

Around 32 farmer organisations, mostly from Punjab, and a few farmers from Gujarat and Maharashtra as well managed to reach Delhi on Friday and assembled at the border areas to continue their protest.

The farmers are protesting against The Farmers’ Produce Trade and Commerce (Promotion and Facilitation) Act, 2020, The Farmers (Empowerment and Protection) Agreement on Price Assurance and Farm Services Act, 2020, and The Essential Commodities (Amendment) Act, 2020.

Union Agriculture Minister Narendra Singh Tomar has said that the Central government is ready for talks with the farmers’ unions on December 3. (ANI)