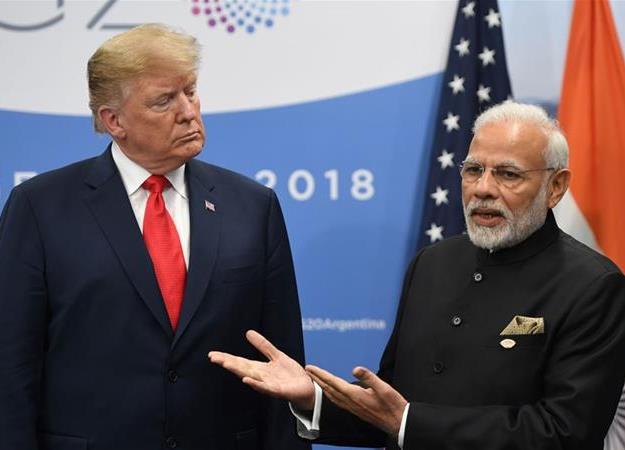 Much water has flown down the Potomac and the Jamuna since Indian-Americans organised an enthusiastic “Howdy Modi” event last September. The Indian premier had then extended full political support to President Donald Trump who is eyeing re-election in November. The Indo-US ties have not changed radically, but are getting ready to be cemented, while domestic conditions and electoral prospects in the ‘largest’ and the ‘greatest’ of democracies definitely are altering. This lends diplomatic and domestic weight to Trump’s India visit, scheduled for February 24-25.

Now, it is Modi’s turn to host a “Kem Chho”, equivalent to “howdy” in Gujarati. Like he had hosted Chinese President Xi Jinping and later, Japan’s Shinzo Abe, Modi will begin Trump’s sojourn with home state Gujarat, where he remains wildly popular. Many Indian-Americans prospering as academics and entrepreneurs are from this western Indian state. Visiting Gujarat could thus help Trump politically, like it helped Britain’s Boris Johnson. A hark-back to ‘howdy’ will certainly be attempted.

ALSO READ: What Is There Not To Like Trump

A more aggressive and triumphant Trump may be visiting India. Compared to 50,000 Indian Americans at the Texas event, Trump says Modi has promised him welcome by “millions and millions” of Indians at the just-built cricket stadium touted as the world’s biggest. “Donald Bhai” should be happy.

Taking that the Trump visit is a quid pro quo exercise, what will Trump bring to India to ‘deserve’ the three million Indian-Americans’ support? India has a long wish list, and presumably, Modi, too, would have one, a private one, that enables him to ride his current woes.

Tens of thousands of Indian-Americans gathered at the ‘howdy’ event had cheered on the two populist leaders, unmindful of the critics’ accusations of them both of having polarized their own people.

It is not clear if Sabarmati Ashram is on Trump’s itinerary. From his track record, however, the irony of his seeking solace at what India’s apostle of peace, truth and nonviolence would call his ‘home’ can’t be ignored.

It would be a welcome distraction for both nationalistic leaders, who face deepening political troubles at home. Trump has weathered the impeachment storm since a majority of American lawmakers seemed to agree that it is okay for Trump to do just about anything if it is in “public interest.” This removes any doubts about his Republican re-nomination and helps take on the Democrats, as of now divided and confused. And looking at his berating the opposition in parliament this week, Modi, too, seems to be in a similar mood, despite a dismal debacle in Delhi’s Assembly polls.

Trump has eight months to chart his political/electoral course, while Narendra Modi has over four years – more than Trump’s entire tenure. He may hope that the “Kem Chho” event may undo the damage to his standing at home and his image in the Western world, caused by his divisive political agenda and an economy in dire slowdown.

Run-up to the tiny but politically significant Delhi Assembly polls saw angry, but largely peaceful, protests, having women and children in the forefront. In what analysts say is accumulated discontent, Indians from all walks of life have railed against a new citizenship law that is widely seen as discriminatory toward Muslim minority and a blow to India’s roots as a secular democracy.

Protests are being replicated in several Indian cities and reportedly, in 30 North American and British cities. Although he is himself known for adopting such postures at home, Trump could come fully-briefed about all this to assess his hosts well.

The Trump visit, said to be born out of their New Year greetings on telephone, could well be Modi’s attempt at a bounce-back. It is a coup of sorts. An American president’s India visit – like it had happened when Bill Clinton, George W. Bush Jr. and Barack Obama visited in the recent years — carries political endorsement and definite economic benefits. With a warm hug to “Donald Bhai”, Modi hopes for both. And since both espouse similar ideologies, unlike Obama who criticized Modi a week after he was feted, Trump could be fully accommodating. Modi can hope to offset some of the Congressional and media criticism in the US.

Pending the visit, officials in two countries have made feverish preparations, including a much-anticipated trade deal. Both are eager for more business and looking to find a counterweight to the rise of China.

The brass tacks would begin in New Delhi. Trump and Modi will have to navigate some tricky geopolitics. Americans have for long been trying to woo India into a closer strategic partnership to contain China, but New Delhi has remained lukewarm. This is unlikely to change. India wants to retain its strategic autonomy while dealing with neighbours. And, truth be told, it’s not easy to deal with Trump’s America.

Both sides are also eager to ink a trade deal. Snags remain and only a partial deal of a modest $10 billion is likely. Although a much smaller economy, India with 1.3 billion people is a huge market. The Trump administration, with eye on the November elections, seems obsessed with the overall American trade deficit and wants India to buy more American goods.

India has tentatively agreed to end price caps on imported medical devices like heart stents and artificial knees, which had been a key sticking point in the talks. But that’s not enough. Trump himself has attacked India’s high tariffs, particularly on Harley-Davidson. The motorcycle, incidentally, is but a speck in the overall bilateral trade. But, it’s like the Rajiv Gandhi Government was forced to buy almond, a low-priority import, from Californian farmers who supported then President Reagan.

Thus, before granting any concessions on that front, the US wants India to promise to purchase billions of dollars of American turkeys, blueberries, apples, pecans and other agricultural products to help reduce a $25 billion trade deficit with India. The Modi government, for its part, is insisting that the Trump administration restore a preferential trade status for India that lowers tariffs on goods like textiles. Let’s see.

Seeking and securing American waivers to its purchases, like oil and defence equipment, from other counties has been painful for India. It has all but surrendered on Iran’s oil. After several decades, four major weapons systems purchased from the US were show-cased at the Republic Day Parade last month.

ALSO READ: Has Trump Edged India Out Of Kabul

Trump and Modi have been keyed-in on Afghanistan in the past. The former wants a role for India. But India would be the last thing on Trump’s mind when pushing the “peace plan”, which is actually a victory-less withdrawal facilitated by Pakistan. Hence question arises: Can the Americans overcome the Pakistanis who want to block India? Or, would they want to?

With that is connected Kashmir since the Modi Government’s annulment of its special status and break-up of India’s only Muslim majority state, howsoever controversial, is aimed as a bulwark against preventing the Jihadi repeat of the 1990s.

Trump continues to propose to ‘help’ (a shift from ‘mediation’ and ‘facilitation’) its resolution. But knowing well India’s sensitivities, any whispers of the ‘K’ word will surely be in play-safe privacy when he meets Modi without aides.