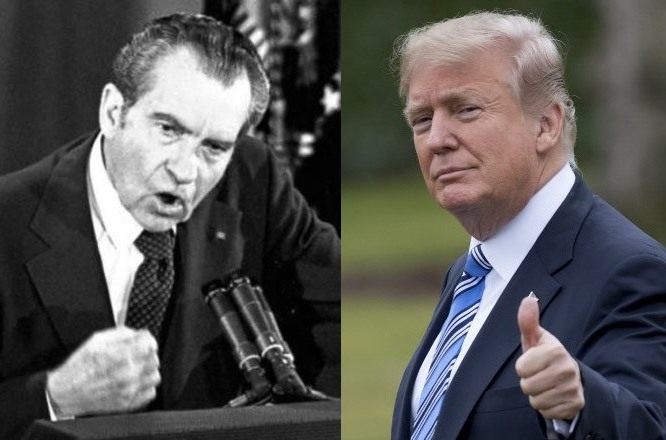 From Nixon To Trump, India Has Come A Long Way

The “Bass Bomb” that exploded last week may not damage the Americans, even Indian Americans, as they prepare to vote in the United States’ presidential elections, come November 3, when incumbent Donald Trump has staked his all for a second term.

The ‘bomb’ is in the shape of confirmation of what is known about how the American leadership of 1971 – President Richard Nixon and National Security Advisor Henry Kissinger – enforced their ‘tilt’ against India and favouring Pakistan, fully aware that the latter was ‘cleansing’ East Pakistan of ‘rebels’ who had voted overwhelmingly against the west-wing.

The duo thought India had contrived or encouraged the flow of ten million-plus refugees. With China factor looming large – Pakistan had facilitated the reach-out to Beijing – the two condoned one of the grimmest man-made disasters, and invited their own diplomatic one, that the last century’s cold war had witnessed.

What is new are official details contained in White House tapes, now declassified and acquired by Prof. Gary J Bass of the Princeton University. They unmistakably paint the two in darkest colours. As they worked their South Asia policy, they frequently engaged in racist remarks and misogyny targeting Indians in general, especially then Prime Minister Indira Gandhi, calling them names.

What we know are the un-bleeped, or less-bleeped taped conversations. Should one be surprised at Trump’s racism and misogyny (he is not alone) in the current electoral discourse? It shatters the image the Americans and their successive leaderships have wanted to cultivate of them being the world’s greatest democrats.

The Bass confirmations, rather than revelations, may not impact Trump who may win. Analysts who predict this, in the same breath, disapprove of him and his policies. They point to his improving his position in the presidential race precisely for the type of racism and misogyny that his peers had engaged in the 1970s.

Analysts predict a likely Trump victory even as they criticise his turning a thriving economy into a jobless one and his handling of the Coronavirus pandemic that has killed more Americans than the two World Wars. Not just the Americans, much of the world today is witnessing strange times, of being ruled by right-wing demagogues.

It would thus be naïve to think that the American voter will be influenced by a diplomatic disasters that occurred nearly half-a-century back. As elsewhere, foreign policy does not impact American elections.

Equally, the Indian American numbers matter but marginally, be it for partly-Indian Kamala Harris, the running mate of Trump’s Democratic rival Joe Biden, or for Trump who did make a bee-line to India, especially Gujarat, being hosted by Prime Minister Narendra Modi.

While showing Americans the mirror, Bass’ account painfully reminds of the Americans’ low esteem when the Indians’ rush to California was gathering momentum in the 1970s and even later, in the 1980s. They can look back with some satisfaction of having done well in the last three decades. Whether they will retain their traditional Democratic preference or vote with “Howdy Modi” will need watching.

Of course, India is no longer the US’ Cold War adversary. Four million Indians, many of them prosperous and many related to India’s policy-making elite, enjoying visa preference over others, study and work there. The two are tied in a strategic partnership that has significantly altered geopolitics of the region well beyond South Asia.

For Indians at home, who have seen many American presidents and many premiers of their own, the “Bass bomb” could revive a measure of anti-American feelings. The Indian political class of that era, it needs reminding, was united in its criticism of the US and had wholeheartedly welcomed Bangladesh’ emergence. Atal Bihari Vajpayee, at least, had called Indira goddess ‘Durga’. The argumentative Indian was never so united – and never since.

The Bass account draws a positive picture of Indira when the Congress party she once led is at its lowest and she and her entire family are being systematically vilified. Will the party want to dwell on her 1971 role, and to what effect, in the face of the hostile Modi/media/middle class juggernaut?

Did Nixon-Kissinger know enough Indians before calling them, among other names, ‘bastards’ and wondered how Indian women “sexless and pathetic people reproduce in large numbers?” Kissinger called Indians “superb flatterers” whose “great skill” was to “suck up to people in key positions”. It is not worth exploring.

Some explanation for their personal peeves and prejudices is, however, available from the account of Maharaj Krishna Rasgotra, whom Indira sent as envoy to the US and was later India’s Foreign Secretary. He had met Kissinger in 1969 in the first few weeks of reaching Washington.

In his 2016 book A Life in Diplomacy, he quotes Indira as saying before posting him: “Richard Nixon means trouble for India. He dislikes India and he hates me.” The ‘hatred’, it turned out, was mutual.

For Nixon and Kissinger, often used to dictators grovelling at their feet – Pakistan’s General Yahya khan was a ‘friend’ — “it was a novel and unpleasant experience to be defied by an Asian leader”, one who led the world’s largest democracy. “In their frustration, Nixon and Kissinger heaped insults and abuses on the Indian prime minister,” writes Rasgotra whose overall worldview shows no anti-US bias.

How did Indira respond? “She bore all that with unwonted sang froid, but left no doubt in her talks with Nixon in 1971, that Pakistan’s pushing ten million of its nationals into India was tantamount to an aggression on her country and would be dealt with as such. She ignored their threats of aid cuts and made it clear that if the US were to embark on a course of hostility, she would live with that too and explore other options.”

Although India received food under American Law PL480, it was no ‘Banana Republic’. Mind you, by that time in August, India had already signed the Peace and Friendship Treaty with the Soviet Union. The US was blind to its likely implications. Nixon relied on Kissinger’s doctrine about establishing ‘linkages’ of bringing in China if Pakistan was in trouble. That never happened. Today, when Pakistan’s economy is dovetailed into Chinese, Trump wants to ‘help’ India against Chinese border incursions. Times have changed.

Rasgotra recalls: “Henry knew (and so did President Nixon) that their policy was in shambles. There were rumours in Washington that Dr Kissinger was in a state of deep depression and that for three or four days, even President Nixon had shunned him.”

Till she lived, Indira never uttered a word about the duo’s ill-treatment. She showed what she and India could do in December 1971. She is no more. Nixon, who had to leave the White House in disgrace over Watergate Scandal, is dead.

Kissinger is around. He has repeatedly apologised. He has visited India and interacted with Indians. Hopefully, he has changed his views of them. Even Bass records that Kissinger may have just echoed Nixon’s prejudices probably without really believing in them.

Rasgotra, who admires Kissinger – nonagenarians both, he is a year younger — records that the latter, at one of their meetings, insisted that he was “not anti-India”. “I let that pass,” Rasgotra concludes.