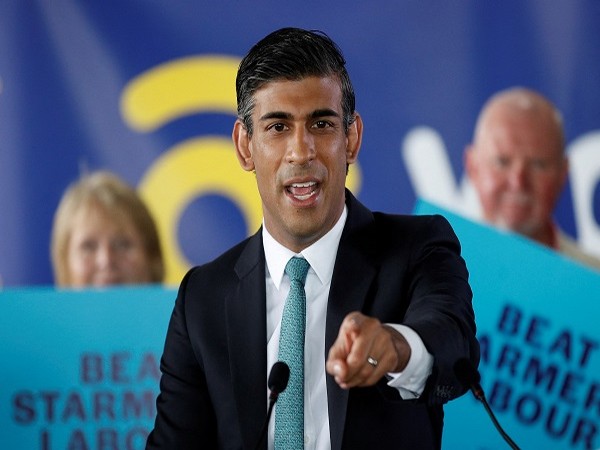 Golden Era Is Over: Sunak On Foreign Policy Approach To China

In his first major address on Foreign Policy, UK Prime Minister Rishi Sunak on Monday strongly asserted that the “golden era” between Britain and China is “now over” and that it is time to evolve the approach towards China as the country is posing a systemic challenge to UK’s values and interest with its authoritarian rule.

During his address at the Lord Mayor’s Banquet at London’s Guildhall, Sunak also criticised the human rights abuses taking place in China while putting forward his stance on foreign policy.
“Let’s be clear, the so-called ‘golden era’ is over, along with the naive idea that trade would lead to social and political reform. We recognise China poses a systemic challenge to our values and interests, a challenge that grows more acute as it moves towards even greater authoritarianism,” the UK Prime Minister said in his address.

Speaking further he said, “We are taking a long-term view on China strengthening our resilience and protecting our economic security,” and added that the UK cannot simply ignore China’s global significance.

The UK Prime Minister also expressed concern over the ongoing protests in China against COVID lockdowns and said that instead of listening to people’s concerns, the Chinese government “has chosen to crack down further” as he highlighted the recent arrest and manhandling of BBC reporters in China.

Thousands of protesters took to the streets of Shanghai, where people were being bundled into police cars. Students have also demonstrated at universities in Beijing and Nanjing.

Meanwhile, hundreds of people gathered in downtown Shanghai on Sunday afternoon to hold what appeared to be a silent protest near where a demonstration against China’s zero-Covid policy erupted in the early hours.

Sunak was supposed to meet Chinese President Xi Jinping during G20 Summit in Bali, Indonesia earlier this month however the meeting was called off after NATO members gathered for an emergency meeting following a missile strike in a Polish village near the Ukrainian border.

The Prime Minister listed measures the UK government has taken, including new authority granted under the National Security and Investment Act, to prevent China from restricting its influence in the UK.

Reiterating Britain’s stand on Indo-Pacific, Sunak said the Indo-Pacific will deliver over half of global growth by 2050 compared with just a quarter from Europe and North America combined, which is why Britain joined the Trans-Pacific trade deal, the Comprehensive and Progressive Agreement for Trans-Pacific Partnership (CPTPP), delivering a new FTA with India and pursuing one with Indonesia.

India and the United Kingdom have a multi-dimensional strategic partnership and actively engage in bilateral trade. The two countries agreed to begin formal negotiations for an FTA in January 2022, aiming to advance trade and investment relations between them.

On Ukraine, Sunak said, “We stand by Ukraine and are also reinvigorating our European relationships to tackle challenges like security and tackling migration.”

UK Prime Minister Rishi Sunak made his maiden visit to Kyiv after assuming office, the previous week and assured Britain’s continued support to Ukraine in its war against Russia.

Taking to Twitter, the British Prime Minister wrote, “Britain knows what it means to fight for freedom. We are with you all the way @ZelenskyyUa,” as Sunak expressed support for Ukraine.

Earlier in August, UK Prime Minister Rishi Sunak wrote a letter on Ukraine’s Independence Day, praising the country’s steadfast courage in standing up to Russian “aggression” and promising support from the people of the United Kingdom.

Sunak promised to continue assisting Ukraine’s valiant warriors and declared that Britain will continue to offer humanitarian aid to make sure Ukrainian people have access to food and medicine amid the ongoing war.

He said the UK’s “adversaries and competitors plan for the long-term” as he mentioned Russia and China and said the UK will “make an evolutionary leap in our approach”. (ANI)