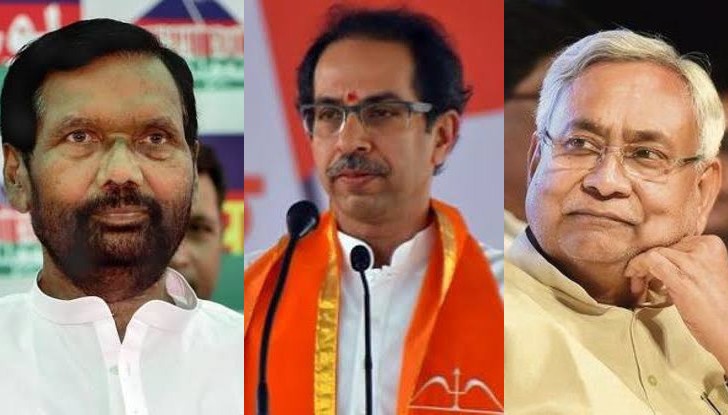 Grumblings In The NDA Camp

The below-par performance by the Bharatiya Janata Party in the recent Maharashtra and Haryana assembly elections has come as big a relief for its allies in the National Democratic Alliance government.

Having been at the receiving end from its dominant partner, the regional parties have now got an opportunity to assert themselves and underline the fact that the BJP continues to be dependent on them. The latest poll results have sent out a message to the BJP that it cannot take its electoral victories for granted and that it should treat its allies with respect.

Buoyed by its spectacular win in the Lok Sabha election less than six months ago, the BJP leadership had become increasingly disdainful of its regional allies. It was convinced it could dictate terms to its partners and that the latter would have no choice but to fall in line as the allies owed their positions in power to the saffron party. It had also begun to believe that the BJP could strike out on its own, having emerged as the main political force in the country.

Consequently, the assembly results came as a setback for the BJP. Though the party emerged as the single largest party in both Maharashtra and Haryana, it was in no position to form a government on its own in the two states. It was forced to enter into an alliance with Dushyant Chautala’s Jannayak Janata Party, a Jat-dominated regional force. Having shunned the Jat community and worked on the consolidation of the non-Jat vote, the BJP will now be forced to recalibrate its political strategy in the state which has the potential of eroding its support base. That the BJP has to deal with assertive allies is evident from the fact that it has been struggling to name its Cabinet ministers more than a fortnight after Haryana chief minister Manohar Lal Khattar was sworn in.

As for Maharashtra, the BJP was unable to form a government following sharp differences with the Shiv Sena, its pre-poll ally. The Uddhav Thackeray-led Sena insisted on a more equitable power-sharing formula which was not agreeable to the BJP. As a result, its 30-year-old partner walked out of the ruling alliance and is currently in talks with the BJP’s political rivals- the Nationalist Congress Party and the Congress – for the formation of a government. Maharashtra has now been placed under Central rule while the BJP’s competitors are making concerted efforts to cobble together the requisite numbers to come to power.

The BJP’s loss of face has predictably emboldened the other regional parties in the NDA. Even as it was coming to terms with the post-poll developments in Maharashtra and Haryana, the BJP got a fresh jolt when the All Jharkhand Students Union, its decades-old ally in Jharkhand upped the ante during their seat-sharing negotiations for the forthcoming assembly polls. Unhappy with the BJP’s offer, the AJSU went ahead and announced its list of candidates which included seats on which the BJP has already named its own candidates. At the same time, the BJP got another shock when its chief whip in Jharkhand, Radhakrishna Kishore, joined the AJSU on being denied a ticket.

The BJP’s troubles did not end there. Another NDA ally, the Lok Janshakti Party, also decided to enter the Jharkhand poll fray on its own. The party, now helmed by Ram Vilas Paswan’s son Chirag Paswan has announced that it will field candidates on 50 seats. The Nitish Kumar-led Janata Dal (U) is also contesting the Jharkhand polls alone. The BJP has refused to part with any seats for these two parties as it believes they have no presence in Jharkhand. The BJP is in partnership with the Janata Dal (U) and the LJP in Bihar and at the Centre. Though these two parties do not have a base in Jharkhand, the fact that they are going solo is essentially meant to warn the BJP that it should be more accommodative of its allies.

Realising that the BJP is on the backfoot, its partners have also revived their demand for better coordination in the NDA. Naresh Gujral, Shiromani Akali Dal’s Rajya Sabha MP, and Janata Dal (U) general secretary KC Tyagi have reminded the BJP that it should treat its partners with greater respect and set up a coordination committee that would serve as a forum to the NDA partners to share their views.

It is a fact that the BJP’s allies have been feeling humiliated and marginalised by its senior partner for some time. The developments following the Maharashtra elections are basically a manifestation of their simmering anger. The Shiv Sena has been sniping at the BJP for the past five years as it was aggrieved that it had been reduced to a junior partner in Maharashtra and that the BJP was working on making the Sena redundant. Of all the regional parties, the Shiv Sena has a strong ideological affinity with the BJP as both parties believe in the concept of Hindutva. The fact that an ideologically-aligned party like the Sena has walked out of the NDA speaks volumes about the treatment meted out by the BJP to its partners.

Similarly, the Janata Dal (U) chief and Bihar chief minister Nitish Kumar has also been feeling the heat from the BJP’s state unit. Several BJP leaders have publicly declared that Nitish Kumar should move to the national stage and hand over the chief minister’s post to their party. Relations between the two parties have come under strain in recent months as the BJP is convinced it has gained sufficient ground to come to power on its own in Bihar or, at least, dictate terms to the Janata Dal (U). Given the trust deficit between the two parties, negotiating a seat-sharing agreement for next year’s Bihar assembly polls could lead to further bitterness between them.

Another ally, the Shiromani Akali Dal has also been upset over that the BJP’s indifferent attitude towards an old ally. While the Akalis are unhappy at being ignored at the Centre, they are also wary of the attempts being made by the Rashtriya Swayamsevak Sangh, the BJP’s ideological mentor, to expand its footprint in Punjab.

Though the situation has not reached crisis point yet, the warning signs are there for all to see. The recent assembly polls have shown that the BJP cannot afford to jettison its regional partners. The saffron party would do well to take heed of this and rework its relationship with its allies.