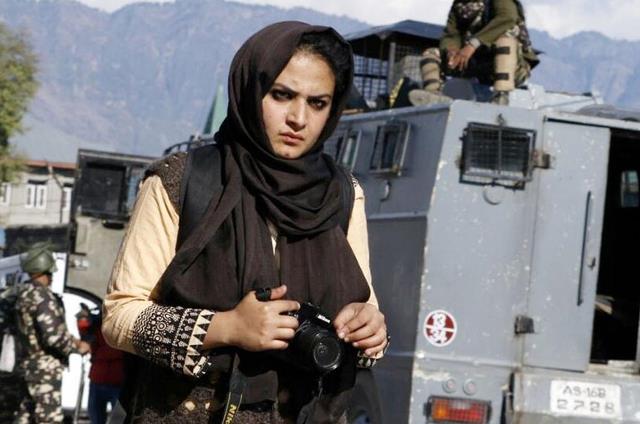 Guilty of Holding a Lens to Society

Did the little ones feel deep sorrow and loss, or, was it a sense of pride and joy, as the audience gave them a standing ovation as a tribute to their father, Danish Siddiqui, ace news photographer, who died so young, ‘on duty’, clicking pictures till the last moment of his life? Or, did they feel a synthesis of mixed emotions, as their father’s memories loomed inside their pure hearts?

So why did they allow the little ones, Yunus, 6, and his sister, Sarah, 4, to visit New York recently to collect the Pulitzer Award, when, without any explanation whatsoever, they denied another young and brilliant photographer, Sanna Irshad Mattoo, from going to America to receive the award, despite a legitimate visa? Is it because she is a Kashmiri?

The ruling dispensation in Delhi, the nation-state, the civil society and the media should have rejoiced this great achievement of journalism whereby four Indian journalists and their sensitive and brave photography was honoured and showcased for the entire world to see! Though the death of Danish kept stalking the collective inner-self, is the sense of fulfillment and pride at this achievement by young photo journalists not another form of love for the nation? So, should we not feel proud simply because Danish is a Muslim from Delhi, and Sanna is a Kashmiri Muslim from the Valley?

Indeed, the silence on the death of Danish within certain quarters in Delhi and India, despite mourning across the world media, has been stunningly shocking. So, even in death, should all humanity be suspended?

Those who compulsively celebrate sectarian schizophrenia driven by xenophobia and hate politics are doomed to be eternally ghettoized, hate-driven and frustrated, despite the pseudo self-glorification of fake greatness, and the pumping of chests every time India defeats Pakistan in a T-20 game. If this is not a clear case of warped nationalism, then, what is? How can we obsessively suppress this proud moment and suppress it, when we actually want to do just the opposite – to clap and applaud this journalistic achievement?

And, how can a nation achieve anything worthwhile if it is all branded in polarizing categories as a Pavlovian reaction, and, thereby, quickly measured in terms of religion, caste, identity, ideology? Should we then turn mum, if a Hindi litterateur, who has got the Booker first time for Hindi literature, happens to be also deeply secular, cares strongly about injustice, and is ready to speak out about young, brilliant Muslim scholars rotting meaninglessly in jail under draconian laws? Is it wrong to be secular and feel strongly about injustice in contemporary India?

Or, is the religion of a sportsperson more important or her great talent on the ground? Or, if a tribal athlete from the remote interiors of indigenous India, breaks all hitherto records – should we hold our joy because she/he had earlier spoken about tribal rights?

“It is so unjust and unfair,” said Sanna. “I am heartbroken.”

“I am actually trying to understand why this has happened to me. I am looking for the reasons. Since I think they have nothing against me, I tried to reach out to officials since I was last barred (in July), but I got no response,” Sanna, 27, told The Telegraph. “I think the right to travel is the basic right of any individual, why deny me the same? I was like so much looking forward to receive it. It is really very traumatic… It is a once-in-a-lifetime achievement for me. My family and I were so excited about it, but, sadly, I am not allowed to collect the award.”

She was part of a Reuters team that won this year’s Pulitzer Prize in Feature Photography. In a bizarre move, she was not allowed by the immigration authorities in Delhi from flying to New York to receive the award, despite a valid US visa and ticket. In July, earlier this year, she had to face another heart-break – again for reasons not known to her. She was not allowed to travel to Paris for a photo show and book launch, even while she was one of the proud winners of the Serendipity Arles Grant, 2020.

If this does not sound and look like a witch-hunt, then, what is it? Reminds me of the media under all forms of dictatatorships,  as in Russia now and Soviet Russia in the past, China, under a totalitarian regime, camouflaged as a communist party, Iran, Myanmar, Saudi Arabia, among similar dispensations. It also reminds of the hounding of liberals, dissenters, Leftists, in a democracy – the McCarthy-driven witch-hunt in America during the Cold War, whereby no one was spared, from celebrity playwright Arthur Miller to Charlie Chaplin, among others.

So what was the crime of Danish, Sanaa, and their photo journalists’ team also comprising Adnan Abidi and Amit Dave? They documented the mass tragedy during Covid in India, especially the thousands of deaths and mass cremations during the deadly Delta wave, including in Delhi, when the entire medical infrastructure had collapsed, there were no oxygen cylinders, beds or medicine, people were gasping for death and dying here, there, everywhere, public parks and streets were turned into cremation grounds in some places, many relatives disowned their own – both, living and dead, and the current regime in Delhi, especially its top-heavy leadership, all but disappeared from the devastating scene!

Danish had also covered the heart-rending long march of the thousands of emaciated, hungry and thirsty migrant workers, walking on the highways under a scorching sun, left to their fate, yet again by the central government, after the prime minister had announced a sudden and draconian lockdown at 8 pm on March 24, 2020.

Significantly, Danish had won the Pulitzer in 2018 for documenting the tragedy of Rohingya refugees who were subjected to genocide by the Burmese army, backed then by Aung San Suu Kyi. He was also out there covering the ‘invasion’ of Taliban at the Son Boldak crossing in July 2021in Afghanistan, when he was killed.

The US has said that it is closely tracking the developments on Sanaa not being allowed to travel. US State Department Deputy Spokesperson Vedant Patel said, “We are committed to supporting Press freedom. And, as the secretary has noted, a shared commitment to democratic values, including the respect for the independence of the press, is a bedrock of the US-India relationship.”

It is reported that she is on a no-fly list along with other journalists in Kashmir. Anyway, journalists in the Valley have been going through a horrible time since the army clampdown and abrogation of Article 370. According to the Human Rights Watch earlier, “at least 35 journalists throughout Kashmir have experienced police questioning, raids, threats, physical abuse, limitations of freedom of movement, or concocted criminal charges for their reporting,” since August 2019.  According to Reporters Without Borders’ 2022 Press Freedom Index, among 180 countries, India ranks 150.

Meanwhile, when movie theatres were reopened in Srinagar after years recently, this reporter called up a veteran journalist in Kashmir. “Tell us your memories about the film culture in Kashmir earlier? Did you see films of Dilip Kumar, Madhubala, Guru Dutta, Waheeda Rehman, Dev Anand? Did you see Pakeezah, Bobby and Sholay when you were young, first day, first show?”

He said he has vivid memories of watching movies in Srinagar those days. However, he said that he is ready to go down the memory lane only on one condition – that his photograph and name will not appear with the interview. “Please understand,” he said. “At this age, I don’t want to go to the police station.”

A brilliant piece after a long wait! Only Amit can write that!