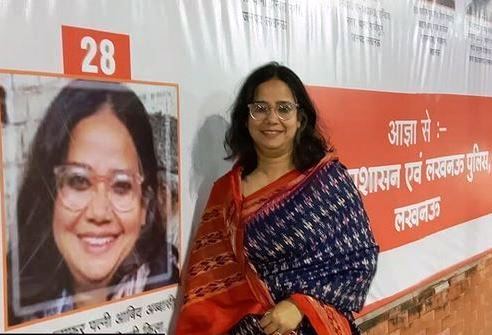 Hanging (On Wall) Without Trial

The BJP government in Uttar Pradesh obviously likes to follow outdated medieval rules. It is obsessed with a kind of revenge politics seldom seen in the Hindi heartland; a government choosing to repeatedly unleash daily vengeance, suffering, punishment and humiliation against its own people, especially peaceful dissenters against the CAA/NRC/NPR, especially against those with Muslim names.

Wanted dead or alive, as in rugged posters or sarkari notices pasted on public walls. Non-violent protestors are given the same treatment as terrorists, hardened criminals, history-sheeters and absconders under the current regime.

Blame, name and shame. Brand them as criminals for the entire world to see. Condemn and degrade them as a public spectacle. Advertise their homes and addresses. Demonise and socially isolate them. Make them vulnerable to abuses and attacks. Even, physical attacks. Teach them a lesson of their lives.

Even if there is no evidence; not even worth an iota of factual objectivity. Even if in case after case the UP government’s negative and prejudiced campaign has collapsed. Even if the cases are sub-judice, with observations in the Allahabad High Court and the Supreme Court, and, mind you, strong observations, as made by the state high court.

Like a man with a drum beating his way through the rural hinterland and in market places in medieval times pronouncing punishment for miscellaneous individuals accused of crime by the monarchy or local, oppressive feudal chieftains. Or, as in Iran, or, as by the Taliban and fundamentalist Islamists in South Waziristan etc – hang them on a public square, or stone them to death in a football stadium, as a public spectacle, so that the entire populace in subjugation can see their own image in the faces of the condemned in case they don’t follow the dominant, hegemonic line.

The ‘name and shame’ hoardings against the protestors were put up in a public space in Lucknow by the administration and police led by Yogi Adityanath, the chief minister of UP, who wears saffron as a sign of his inherited saintliness. However, this self-mage has no saintly aversion to the shadowy zones of worldliness and its negative characteristics, such as hate, power, and violent and bad language. He truly and symbolically marks the end of the State as a secular entity.

So what did the Allahabad High Court state in response to a petition questioning this public degradation and humiliation of ordinary people and respectable citizens of Lucknow, including prominent civil society and social activits, like Sadaf Jafar? What is the significance of this extra-judicial trail?

Indeed, Sadaf was simply clicking pictures, making a video perhaps, while warning the police to look for violent rioters during the early phase of protests in Lucknow, which followed a pattern elsewhere. This method in the madness, or the pattern of violence and blood on the streets, were mainly followed only in BJP-ruled states. It reached its apocalyptic finale in Northeast Delhi soon after, with the cops looking elsewhere, or, becoming, yet again, a partisan accomplice to the violence unleashed on the minority community.

WATCH: ‘Left Only With Clothes I Am Wearing’

Clearly, the riots were engineered in Delhi, to create Hindu-Muslim communal polarisation. And, surely, it was also a pogrom, with property, homes and shops of Muslims targeted and ravaged – along with their organised killings.

More than 20 people were killed, including, reportedly, bystanders and innocent people who had nothing to do with the protests in UP. The UP police blamed the protestors for killing the protestors, in an absurd and ironical twist of diabolical irrationality.  Besides, in some towns, the cops attacked Muslim households at midnight, beating up law-abiding residents, and, allegedly, stealing stuff too, as stated by the locals.

Besides Sadaf, who is also a Congress leader, veteran police officer, a former highly respected Inspector General in the UP Police, SR Darapuri, was arrested. Sadaf was allegedly abused and beaten up in police custody – namely because her name reflected a community which is openly hated by the current regimes and their fanatic bhakts in Delhi and Lucknow.

“Boli se nahin to goli se,” said the Yogi in the run-up the assembly elections in Delhi, where the BJP yet again openly played the communal card. This sounded almost like the old Texan saying: “The law hangs on the hip.” Surely, he was only following the provocative call given earlier by Union minister Anurag Thakur seconded by a Hinduva mob which seemed thirsty for blood:  Desh ke gaddaro ko… goli maaro etc.”

However, as the whole nation and the world witnessed with awe and shock, when an upright Delhi High Court judge followed the rule of law and asked the police to file FIRs against those BJP politicians who indulged in hate speech, which, clearly, led to the riots, arson and killings in Northeast Delhi, he was promptly transferred. The government called it a routine transfer – but the midnight order would always remind the people of the midnight knocks during Indira Gandhi’s notorious Emergency, and the travesty of justice in contemporary India.

The Allahabad High Court, while asking the Yogi government to remove the hoardings, said: “In entirety, we are having no doubt that the action of the State, which is subject matter of this public interest litigation, is nothing but an unwarranted interference in privacy of people. The same, hence, is in violation of Article 21 of the Constitution of India,” a Division Bench of Chief Justice Govind Mathur and Justice Ramesh Sinha said.

The Bench stated: “… (The) Advocate General failed to satisfy us as to why the personal data of few persons have been placed on banners though in the state of Uttar Pradesh (when) there are lakhs of accused persons who are facing serious allegations pertaining to commission of crimes whose personal details have not been subjected to publicity,” the high court said in its 14-page order.

“…There are certain provisions empowering the investigating agencies or other executives to take picture of accused for the purpose of their identification and record but that too is not open for publication. The only time these photographs can be published is to have assistance in the apprehension of a fugitive from justice,” said the court. The court observed that “no law is in existence permitting the State to place the banners with personal data of the accused from whom compensation is to be charged.”

The UP government, instead of accepting its grave mistake, went to the apex court. The Supreme Court told the Yogi government that its decision to put up hoardings identifying anti-CAA protesters has no backing in law. It, however, did not pass any interim order and said the matter would be heard later by a three-judge bench.

Ideally, it should have immediately endorsed the Allahabad High Court judgement and asked the UP administration to take down the hoardings with immediate effect. However, in these times, the ideal, or idealism, seems as distant or compromised as the law and order machinery, or the ethics of good governance, as in the state of Uttar Pradesh led by a self-styled yogi in saffron.