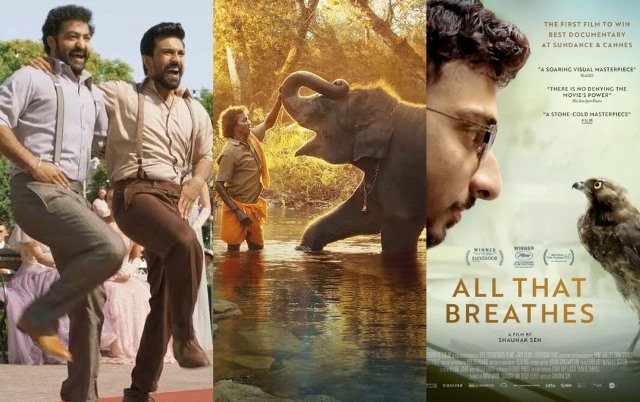 After the Oscar nominations were announced, every Indian’s heart was pumped with pride and joy as we secured three nominations this year.

First and foremost, of course, the much-celebrated music of ‘RRR’ made it to the Oscars race this year. The magnum opus film’s energy-packed track ‘Naatu Naatu’ made it to the nominations this year in the ‘Original Song’ category.

This lyrical composition of ‘Naatu Naatu’ by MM Keeravani, high energy rendition by singers Rahul Sipligunj and Kaala Bhairava, unique choreography by Prem Rakshith, and lyrics by Chandrabose are all the elements that make this ‘RRR’ mass anthem a perfect dance craze.

The song is competing against ‘Applause’ from the film ‘Tell It Like A Woman,’ ‘Hold My Hand’ from the movie ‘Top Gun: Maverick,’ ‘Lift me Up’ from ‘Black Panther: Wakanda Forever,’ and ‘This Is Life,’ from ‘Everything, Everywhere All At Once’.

Not just ‘Naatu Naatu’, two Indian documentaries also made it to the nominations this year – Shaunak Sen’s ‘All That Breathes’ and Kartiki Gonsalves’ ‘The Elephant Whisperers’.

‘All That Breathes’ has been nominated in the ‘Documentary Feature Film’ category against ‘All the Beauty and the Bloodshed’, ‘Fire Of Love,’ ‘A House made of Splinters,’ and ‘Navalny’.

The film revolves around the lives of siblings Mohammad Saud and Nadeem Shehzad, who work out of their derelict basement in Delhi’s Wazirabad, to rescue and treat injured birds, especially the black kites.

‘The Elephant Whisperers’ has been nominated in the ‘Documentary Short Film Category’ against ‘Haul Out,’ ‘How Do You Measure A Year?’ ‘The Martha Mitchell Effect,’ and ‘Stranger At The Gate’.

The Oscars are going to be held on March 13 this year and while the wait is going to be quite a long one from now, the nominations have sure lifted the spirits of not just the crew and cast of the films mentioned above, but also of everyone who hopes to see an Indian movie bagging the prestigious award. (ANI)