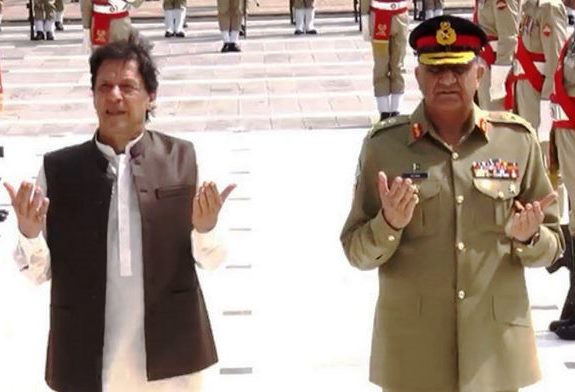 Imran – Between Hardliners And A Hard Place

It used to be hockey once upon a time, it is now cricket. Winning a cricket match against India, after all the mutual war cries on the battlefield and cricket ground, has been the best thing to happen, in a long time, to Pakistan’s cricketing hero-turned-politician, Prime Minister Imran Khan.

A true Pathan, he may keep his handsome chin up. But he is currently besieged from all sides, and analysts at home and abroad have begun to say that he may not complete his term, now into its third year.

He has goofed his way through his first-ever stint in political power, changing ministers and special assistants to man his government with a record that can better that of Donald Trump. He gained office, albeit through an election, but essentially because the all-powerful army, decided to anoint him after being disillusioned with the two earlier options, the Pakistan Peoples’ party and the Pakistan Muslim League of three-time Prime Minister Nawaz Sharif.

He has angered his benefactors, first by messing up governance. At this time last year, the Pakistan Democratic Movement (PDM) of opposition parties was, for the first time, attacking the armed forces and even mentioning the top brass by name at protest rallies. The movement frittered away this year because of their own competing ambitions and mutual contradictions. The military mainly, but Imran, at least partially, must get credit for this.

But the movement is back, when the military sees him as ‘interfering’ in its working. He has shown preference for Lt. Gen. Faiz Hameed, the Director General, Inter-Services Intelligence (ISI), which is the most powerful wing of the powerful army. Hameed’s visiting Kabul, allegedly at Imran’s behest, and speaking to media, a tea mug in hand, has upset the Chief, Gen. Qaiser Javed Bajwa.

The talk in the Army GHQ, reports say, is that it is one thing to guide the whole strategy and operation that brought the Taliban back to power in Afghanistan, but it is quite another for the ISI chief, albeit a key man in it, to be seen as a peacemaker among the quarrelling Taliban helping them to form their interim government. Also, his alleged role in ensuring key posts in that government for the Haqqani family that runs a dreaded network of fighters that is proscribed by the United Nations, has upset the United States. Seething over the way it was made to evacuate from Afghanistan and looking for scapegoats, the US, holding all the aces at global financial bodies, could get bloody-minded and along with the Taliban, punish Pakistan as well.

Getting funds from friends has been iffy. Saudi Arabia, which took back two billion it loaned last year, has just agreed to $3billion. The International Monetary Fund (IMF) wants to impose severe preconditions that Islamabad is loath to accept because of their adverse impact on the domestic front, last week sent back Finance Minister Shaukat Tareen without a pact.

Bajwa transferred Hameed out of the ISI, and had an official announcement made. After a huge public debate for three weeks, Imran has surrendered in this turf war with the army. The tussle shows him up as less trust-worthy by the men in khaki, also vulnerable to his political opponents, ready to pounce upon him. The PDM has revived, this time to protest rising prices of essential commodities.

Like the opposition parties, Imran has a tough time dealing with the Islamists. Some of them have joined the Tehreek-e-Labbaik Pakistan (TLP)’s “Long March” from Lahore to Islamabad. In a way, Imran is getting the dose of the same medicine he served his predecessor Nawaz Sharif, laying a siege that lasted several weeks and was called off, again, on a telephone call from the Army GHQs.

The TLP’s demands make scary reading for Imran and his government. Besides release of its chief who has been in and out of jail, it wants the government to expel the French envoy in Islamabad because of France’s action against its radical Muslims. The diplomatic fallout of any such action could impact Pakistan’s relations, with not just France, but the entire Western world that is fearful of rising militancy in the Afghanistan-Pakistan region.

As the long marchers broke through security cordons last week, the government did the only thing it has been used to – talk with an organization it has banned, and release hundreds of marchers and their key leaders. It is readying to talk also to its own Taliban of the Tehreek-e-Taliban Pakistan (TTP).

Although many Muslims across the globe are upset with what they perceive as Islamophobia of the West, only in Pakistan, perhaps, thousands take to the streets on this issue and some even die of police bullets.

To return to the Afghanistan developments, they give Pakistan a distinct geo-political advantage over all other stake holders. But Imran cannot rejoice at this victory that is so far proving to be Pyrrhic. The Islamists at home have become bolder and the TLP march is just one indicator. The Taliban rule has resolved nothing in Pakistan’s relations with Kabul, nor within Afghanistan. This has meant more refugees crossing over the Khyber Pass. Pakistan already hosts half-a-million, some for the last four decades. The socio-economic impact of all this is negative.

The US wants to retain more than just a foot-hold in the region and is pressuring Islamabad to allow air operations facilities. Imran Khan has vociferously refused it, but may have to yield, angering the Taliban in Kabul who have warned of ‘consequences’. These are difficult choices and Imran Khan is no Churchill or De Gaulle.

Lastly, the India factor. In the last two decades, despite frequent upheavals, successive governments on both sides have brought phases of understanding and relative peace. But Narendra Modi believes in giving-it-back. He did pay a surprise visit to Lahore to attend a wedding in Nawaz Sharif’s family. But he has simply ignored Imran Khan, when not calling him “Mr Niazi”, an allusion to the general who surrendered to the Indian forces in Dhaka 50 years ago. Pakistan under Imran has become part of his party’s electoral arithmetic.

Khan has lost both ways. He wished for Modi’s success in the 2019 Indian elections, and when that happened, he has been attacking Modi and his government of ‘fascism’ and what not. His anti-India pitch has not worked even after Modi Government’s most provocative action against Pakistan, of dissolving the very entity of the disputed State of Jammu and Kashmir.

Facing all these woes, at home, abroad and with India, Imran Khan and his “men in green” deserve winning the cricket match.