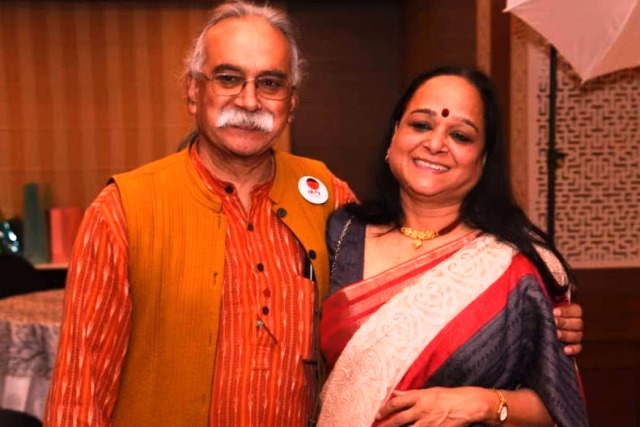 ‘In A Swift, Cruel Stroke I Lost A Precious Partner, And I blame Central Govt For It’

As the threat from a new Covid variant looms, Indu Prakash Singh recounts his irreparable loss due to an inept Central healthcare system during the second pandemic wave

My wife, Renuka, a committed social activist, was admitted to the Jaypee Hospital, Noida, on April 24, 2021, during the peak of the delta wave. She died on May 18, 2021. She died because we could not get an ICU bed in any of the hospitals in Delhi, the national capital.

For Renuka, her work with the poorest, orphans, children, girls, and the homeless — was her passion. She had her first dose of CoviShield vaccination on April 3, 2021, and was constantly going out. Our friends say that Renuka should have protected herself but she wouldn’t sit at home. One of her colleagues had a partner who had tested Covid positive. She too contracted the deadly virus.

When we wheeled her into the hospital, I told her, “You are a fighter. You have to come back — victorious.” She assured me she would come back. She valiantly fought the virus. She would warn me: “Don’t come close.” She was not an untouchable for me, even at that time. While taking her to different hospitals from April 22, my mask kept falling. Both Pragya, my daughter, and Renuka would ask me to be careful. But how could I be?

Soon after admitting her to the hospital, I too developed a high fever; not surprisingly, I too tested positive. My biggest regret is that I landed up in the hospital on April 27. Renuka was on Bipap and would call up friends on different issues (AC not working, her throat going dry, asking for coconut water, etc.). She called me on April 28 and said: “Indu, I kept telling you to wear the mask properly and not come close to me. But you didn’t.” I reassured her that all will be fine. Once I come out of the hospital, I will take care of everything. But, it was not to be.

I got discharged from the hospital on May 6, 2021. I was impatient to meet her. I was asked by the doctors to quarantine for a week. My son, Manav, arrived from Dublin, Ireland. We went to see her when she was on the ventilator. She was not conscious. We don’t know if she heard us imploring her to fight; prayers for her wellbeing were not answered.

We lost Renuka due to a lack of oxygen supply, which was not there in the two hospitals we took her to in the first instance; one was a government hospital, and the other was private.

As per Renuka’s wishes, her last rites were performed at the Electric Crematorium in Delhi. No priest was involved. She always stood for human rights. She could never tolerate child labor or exploitation. She never minced words, never made the truth palatable. She would say it gently but say she would.

While she fought for human rights, Renuka never let it get her embittered. She was a happy person — deep down. She loved traveling, meeting people, befriending them, and inviting them over for lunch and dinner. Renuka was full of life and wanted the same for everyone.

She was a perfect partner. We lived happily. We had our differences, which never transmuted into fights. Deep down, we loved each other immensely even to this day, when she has moved into her divine abode.

Renuka leaves behind all of us, to carry on her mission. And she has the backing of her ‘thousands of daughters’, to carry the flame of change and transformation ahead, into time and space, far and wide.

Indeed, if another deadly wave strikes India, I think the ‘whole of society approach’ is the need of the hour. In all the phases of the pandemic, civil society played a major role. The Union government was clearly missing in action. The Opposition-ruled states were not fully supported by the Centre.

If there is a new upsurge of the virus, the poor will suffer hugely. They will yet again lose out on livelihood and hunger will loom large. They will have weak resort patterns to health. The most vulnerable fare the worst in all such emergencies.

We are aware of what happened after the first lockdown on March 24, 2020. It led to massive reverse migration of migrant workers. Many died on the way, killed by trains on railway tracks, of exhaustion, hunger, etc. Before Covid reached them, poverty had struck them hard.

The government must ensure that all its schemes reach the most vulnerable and poor: Dalits, tribals, Muslims, women, and children. That is the best and only way to deal with any emergency. There has to be a convergence of government departments and their schemes, entitlements, and services. So that, in any eventuality, the suffering of the most vulnerable gets reduced. Surely, I dream of the entire elimination of poverty.

– As told to Amit Sengupta

Thanks for doing this story my dear.

Good one my dear