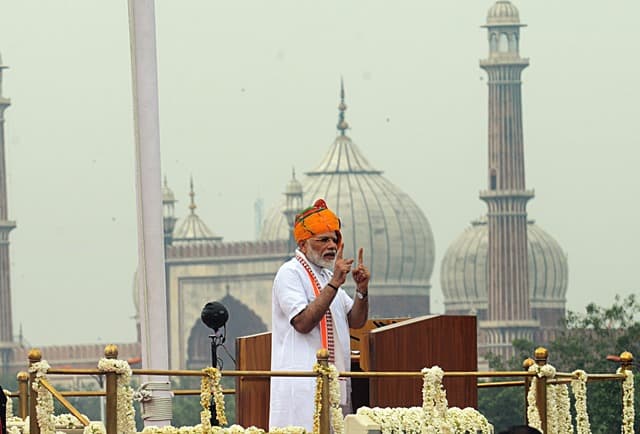 Independence Day For A 5,000-Yr-Old Civilisation!

British rule in India was just a blip in the long history of the subcontinent. It is best to fold it away in the archaeology of power and reclaim the present as a continuum of many millennia

For a 5,000-year old civilisation to be celebrating ‘Independence’ Day is not only ‘naff’ but an admission that a superior culture has mastered and nurtured it into some sort of maturity. It gives too much respect for a 200-period of rule by the British, neglecting a thousand years of colonisation by other invading forces, including the Mughals, and a 5000 year of indigenous civilisation that was more advanced than the invading British.

Wouldn’t it be more dignified to drop ‘independence’ day and rename it with a new name signifying reaffirmation and continuity of an ancient civilisation that has seen much, experienced much and absorbed much.

The Mughals lasted nearly seven hundred years. Prior to them there were others who had been lords at Delhi, including Sikandar Lodhi. Why so much obsession with a mere 200 years of the British?

There is no doubt that the British were the first invaders who had brought the whole region under one ruler, the British Crown. It is also true that they introduced much of the infrastructure, institutions, constitutional and legal instruments and administrative systems that sustain both India and Pakistan in the modern era.

But much has changed in United Kingdom. It is no longer the Britain, the colonising power that had once thought of itself as a superior culture and power. Britain has learnt a lot from its experience during the colonial period and from the immigrant populations that have settled in its territory. It has metamorphosed. It now seeks partners rather than subordinates around the world.

But India hangs on to the memory of British colonisation more than seventy years after they left. It seems there are still wounds of history, of being brow beaten into modernity, of being oppressed for resources and of being nurtured to become ‘civilised’ as the British called it. It is release from this long period of misery, of being a student, of being shaped and finally matured that 15th august commemorates. Why else celebrate independence.

Every year India gives an update on its stage in development on this day as the Prime Minister stands at Lal Qila to read from the progress card. The PM also expresses aspirations for further improvements. The British delegation is also sat in the enclosure of diplomats, perhaps feeling bored, perhaps feeling a sense of satisfaction that they have started the country on a right path, or perhaps wondering what has all this got to do with them after decades.

With a history of 5000 years, a civilisation with tremendous depth and wisdom, why give the impression as if it only came of age on 15th August 1947? Isn’t it humiliating?

In fact the civilisations of India have always been free. That is why India did not end up with mass conversions either into Islam or Christianity. The civilisations have resisted enslavement through the ages. It is the State that was colonised, first by Islamic invaders, then by European (British, French and Portuguese) invaders. It is the State which seems to be celebrating its independence. But then why just from British. Why not from the Mughals?

Delhi feels like a spook town on this day of State celebration. There does not seem to be great enthusiasm on the part of masses to celebrate Independence Day with any popular cultural functions. There isn’t the razzmatazz, the family reunions, the fireworks, the town parades etc that the American Independence day is known for. It is not difficult to understand this difference. The USA is a new-born country, a recent community and one without a lineage. It was full of migrants who sought to forge their own country and way of life free from the British Crown.

India is different. The region had distinctive cultures and civilisations before the British and they have continued after the British left. The people have merely succeeded in throwing out the invaders who didn’t integrate with the indigenous. Nothing much changed in the everyday culture and the long history of the region in terms of its practices, or its people, or its belief systems. In fact there were some distortions introduced during the Raj, which are being corrected now.  The cultures of the region were there before 1947 and have continued since. Those who ruled the State have changed.

Perhaps rather than continue with a historical timewarp, why not call this day a regeneration day and name it ‘Bharat Divas’ giving its different regions a day to celebrate their distinctive cultures, customs, dances, etc. It will be a day of diversity and unity, a day of common celebration but with distinctive flavours and a day when people across the country can put their passions into being part of a whole yet with their own languages and ways.

It could be a very participatory day, as colourful as Diwali, but with a difference. Whereas Diwali is a religious festival of one religion, albeit the majority, the Hindus, a common Bharat divas will be secular, encouraging everyone irrespective of their background to celebrate a day of unity.

Imagine a day like this where parades take place with floats from different sections of society, with different cultural dances and different national dresses all celebrating their common nationality. It will be a tremendous reflection of the diversity of the region, its long surviving plurality and its colourful cultures.

The British period was but a blip in the long history of the region. It is best to fold it away in the archelogy of power and reclaim the present as a continuum of many millennia without giving importance to any one period. A Bharat Divas has more pride and more indigenous flavour to it. This day can be a celebration that Bharat finally started to revive itself.