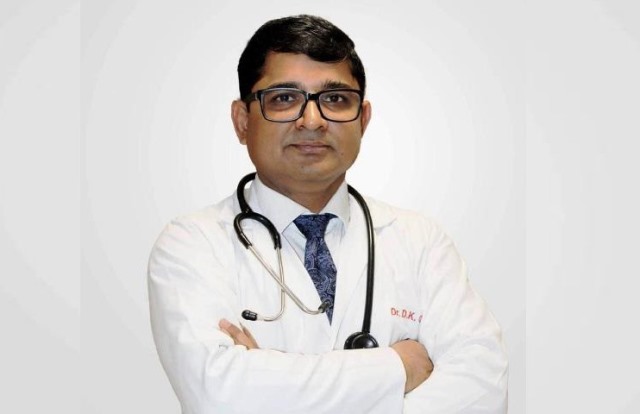 ‘India Can Tackle Any Covid Wave Now; But A Surge Is Unlikely’

Dr DK Gupta, MD of Felix Hospital, Noida, says while the world is worried about looming new Covid variant, India sits on a sweet spot to fight off any surge

Over the last three years, China has made many false claims with regard to Covid-19, its origin and its spread. Most of these assertions fell flat in reality. Initially, China claimed that the infections did not originate from their country, to ward off the blame for the pandemic. The result of such a denial was that its own people had to bear the consequence.

For their global image, they adopted an unyielding zero-Covid policy and made false declarations. They claimed that their vaccine (Sinopharm) was very effective. But even their allies did not trust them. Its efficacy was questionable, actually terribly low, and as a result we see the current wave of Covid hitting China and the world soon.

Of late, China ‘Zero covid’ is a flop — people aren’t getting basic amenities to fight the infection; hospitals are full of patients; there is shortage of doctors, medicine, blood and oxygen etc. People are now protesting against the government.

Spike of Covid cases in China is worrying for Indians too and there is growing concern if a repeat situation of 2021 second wave is looming. However let me assure everyone that India stands strong. Over 95% of the population has received the primary doses of Covid vaccine and 30% have got a booster. Another wave is unlikely as widespread infection during the previous Delta and Omicron waves has given a large section of Indians hybrid immunity. This will prove vital in fighting a fresh wave of infections.

Incidentally, India may be at a better position than most other countries in terms of fighting a new wave or a new variant like BF.7. This BF.7 is a variant within the Omicron family of Variants of Concern (VoC). Many of the mutations seen in earlier lineages appear to be consolidating in the Omicron lineage, which allows it to evade pre-existing antibodies and makes it highly transmissible.

This is not a new virus. It is yet another Omicron family member. Therefore, the symptoms of Covid remain the same — fever, cough, shortness of breath, difficulty breathing, nausea, vomiting and diarrhea. We do expect more variants as different mutations get together.

We are much better prepared than we were during the Delta wave in April-June 2021 when there was low vaccination. I doubt there would be any big waves in India due to reasons mentioned above. This is not to say that we become complacent; we must stay vigilant because vaccines protect against disease not infection. And very large numbers of infections may lead to increases in the numbers of severe disease patients.

I doubt another wave would emerge in India and I am assured that Indians are better prepared than they were in previous waves, in case of another surge. We should stay cautious but not worry too much. This is because over 90 percent of adults in India have received two doses (primary series) of a vaccine, a large fraction of Indians have hybrid immunity, i.e. vaccine plus infection which works well against severe disease.

A little ray of hope seen after reading this article….well written

As a responsible country with a large 2nd population after China, we very responsibly planned for the vaccination of each & every citizen of our country free of cost. As our country cares their citizens more than the developed countries. And we are confident that bad time has passed and we are waiting for a new India.

I agree, India is probably in a better shape than before in battling Covid.

Necessary Functional Performance/Analytics Social
These cookies are essential in order to enable you to move around the website and use its features. Without these cookies basic services cannot be provided.
PHPSESSID
Cookie generated by applications based on the PHP language. This is a general purpose identifier used to maintain user session variables. It is normally a random generated number, how it is used can be specific to the site, but a good example is maintaining a logged-in status for a user between pages.
wordpress_test_cookie
Used on sites built with Wordpress. Tests whether or not the browser has cookies enabled
Technical Cookies
In order to use this website we use the following technically required cookies
These cookies allow the website to remember choices you make (such as your user name, language or the region you are in) and provide enhanced, more personal features. These cookies can also be used to remember changes you have made to text size, fonts and other parts of web pages that you can customize. They may also be used to provide services you have asked for such as watching a video or commenting on a blog. The information these cookies collect may be anonymized and they cannot track your browsing activity on other websites.
__cfduid
Cookie associated with sites using CloudFlare, used to speed up page load times. According to CloudFlare it is used to override any security restrictions based on the IP address the visitor is coming from. It does not contain any user identification information.
__cfruid
Cookie associated with sites using CloudFlare, used to identify trusted web traffic.
These cookies collect information about how visitors use a website, for instance which pages visitors go to most often, and if they get error messages from web pages. These cookies don’t collect information that identifies a visitor. All information these cookies collect is aggregated and therefore anonymous. It is only used to improve how a website works.
_gat_gtag_UA_2592650_1
This cookies is installed by Google Universal Analytics to throttle the request rate to limit the collection of data on high traffic sites.
_gat_gtag_UA_2592650_12
This cookies is installed by Google Universal Analytics to throttle the request rate to limit the collection of data on high traffic sites.
HotJar
_ga
This cookie name is associated with Google Universal Analytics - which is a significant update to Google's more commonly used analytics service. This cookie is used to distinguish unique users by assigning a randomly generated number as a client identifier. It is included in each page request in a site and used to calculate visitor, session and campaign data for the sites analytics reports. By default it is set to expire after 2 years, although this is customisable by website owners.
_gat
This cookie name is associated with Google Universal Analytics, according to documentation it is used to throttle the request rate - limiting the collection of data on high traffic sites. It expires after 10 minutes.
_gid
This cookie is installed by Google Analytics. The cookie is used to store information of how visitors use a website and helps in creating an analytics report of how the website is doing. The data collected including the number visitors, the source where they have come from, and the pages visited in an anonymous form.
These cookies are used by Youtube, Google, Twitter, and Facebook to deliver adverts that are relevant to you and your interests. They are also used to limit the number of times you see an advertisement as well as help measure the effectiveness of the advertising campaign.
Facebook
Youtube
Twitter
Google
__unam
This cookie is usually associated with the ShareThis social sharing widget placed in a site to enable sharing of content across various social networks. It counts clicks and shares of a page.
GPS
This cookie is set by Youtube and registers a unique ID for tracking users based on their geographical location.
Weather.io
Remember you weather Location
Decline all Services
Accept all Services
wpDiscuz
7
0
Would love your thoughts, please comment.x
()
x
| Reply